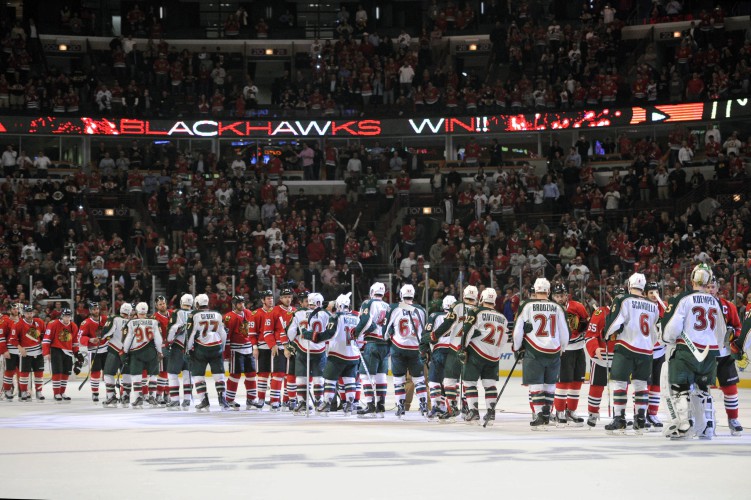 Well, that’s that then. An underwhelming series came to what was pretty much an underwhelming end. Sure, it looks glossy to have an emphatic scoreline, but I find the most encouraging aspect of the whole thing to be Quenneville’s quote that he wasn’t too thrilled with the last two games and feels that that there’s a few levels the Hawks are going to have to reach before we pack up the cats for the summer.

And I have to agree.

The Hawks weren’t great tonight, just as they weren’t great in Game 4. They did enough, some players more so and some less. And though it’s easy to say that you only have to pull out enough to win to beat the Wild when you’re Milton Berle, I don’t think it’s so simple as to just turn it on when you feel the challenge is up to your standards.

But now’s not the time for that. The Hawks are past the first round for the first time in three years, and that feels all right.

-Oh hey, let’s get one more negative out of the way: Ahem….Kane -3, Sharp -2, Handzus -6. What are those? CORSI ratings for the night. Why? Because Handzus had another awful game in an awful series…because he just isn’t that good. And this could be a real problem next round. Who wants Joe Pavelski or Logan Couture at the other end of that?

When you add in how active and destructive Kruger was tonight, why are we bothering with this? Or the fact that Sharp is working so hard in his defensive end from the wing and playing a 200-foot game anyway, why isn’t he playing center?

When Handzus isn’t winning draws, he’s borderline-useless. And he has to win a lot of them to get involved. He didn’t tonight, nor has he all series. Both the Wings and Sharks are exceptional at the dot. It won’t get better there.

-Well, I think we all knew the top line would break out once we hinted that we were waiting. So there it is. All it took was what looked like a pretty innocuous turnover from Jonas Brodin, and fractions of a second later it was behind Harding.

-Speaking of which, I can’t help but feel for Harding, who gutted this one out because there was not other option for the Wild. He clearly was ailing. Seems like a rough ending for what was already a rough year for him.

-Boy, isn’t Jared Spurgeon glad this series is over?

-When was the last “Cor-ey” chant at the UC? He’s earned it, as he’s looked more and more confident with each game. If anything, this break could hurt him as he’s clearly feeling it.

-Leddy didn’t have a great game, and I still worry about when teams are able to get forwards on him when he’s retrieving the puck. He’s not finding space as easily as he did during the season.

-Oh, the Hawks scored on a power play that didn’t matter. That’s nice. They still need to fucking move.

-I have to be honest, I didn’t like Q’s timeout before the 5-on-3. I know 4-1 is still technically a game and anything could happen. But it already felt over at that point and it just seemed like it was an attempt to get Hossa a hat trick when you were already putting the Wild down. But it’s nitpicky.

-Speaking of the Wild, there will come a time when we all will not like the sight of Jason Zucker and Jonas Brodin coming here three times a year. It’s coming soon. They are definitely a team to watch. Brodin is going to be a real thing.

So the Hawks get through Round 1 without ever finding 3rd gear. It feels great in a lot of senses, and a little worrisome in others. Part of the journey.

It’s time to ramble on….