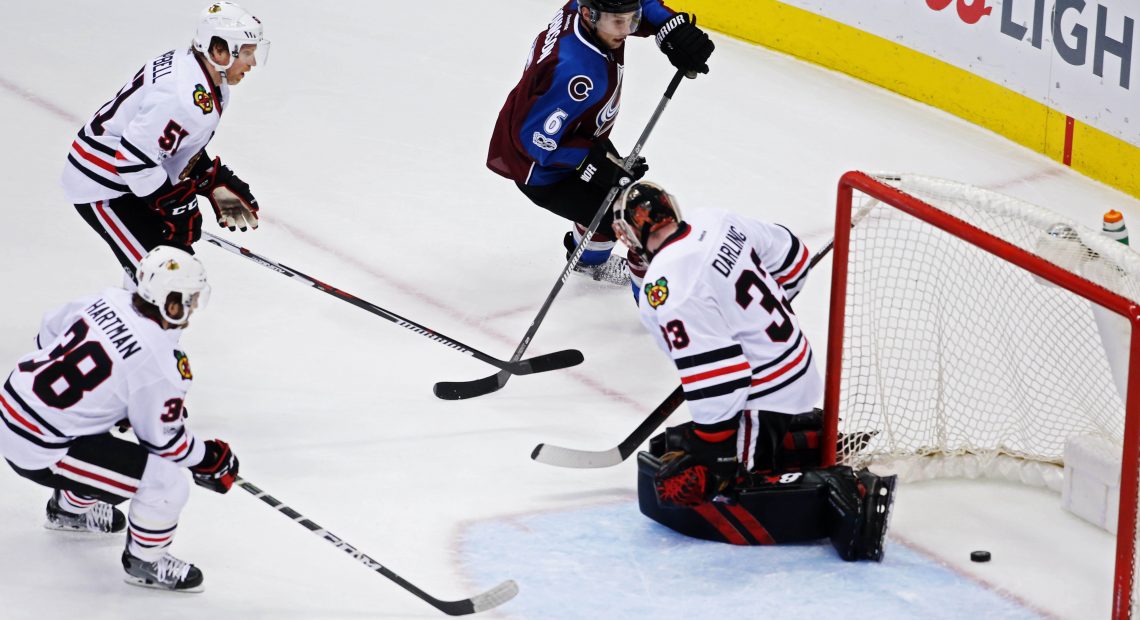 This time of season, I’m often reminded of a home and home between the Blackhawks and Detroit Red Wings to close out the 2008-2009 season. The Hawks were returning to the playoffs for the first time after nearly a decade away. The Red Wings were the class of the league. Throughout the regular season, the Wings basically toyed with the Hawks to the tune of beating them in every game. They beat them twice in regulation and twice in overtime; the Hossa shootout slapper over Khabibulin’s shoulder permanently ingrained in anyone’s memory who watched.

Then with the regular season down to its two final games, the Wings were checked out. Even dressing a roster of their stars that included Pavel Datsyuk, Henrik Zetterberg, Nik Lidstrom, etc., the Hawks easily beat them both times by scores of 4-2 and 3-0. Despite something smelly funny (not Sam), we happily accepted the two victories and looked forward to a playoff matchup. Perhaps the Hawks had finally figured out how to beat the Wings.

Then, the playoffs started and we were very appropriately reminded that the really good teams know when the regular season is coming to a close and the results are wholly and largely meaningless.

Tuesday in Colorado was sort of the same thing but with Colorado playing the role of the Hawks circa 2005-2006 but with much more talent and all of the stupidity. The Hawks are quite obviously in cruise control mode as the final days of the calendar tick off the schedule and their seeding clinched.

All you needed to see to know that was Andrew Desjardins played a whooping 17 minutes. Granted, his line of Vince Strohs and Tomas Jurco were the only positive possession of the the Hawk forwards. However if this were November, Joel Quenneville would’ve pushed the envelope with his top guns for two points instead of rewarding the grunts as he did here.

Nevertheless, it’s still slightly unsettling to blow a 3 goal lead to a historically bad team. That should come with an asterisk; because while there is clearly something broken with the Avalanche, there is still a ton of top 10 talent on this roster in Matt Duchene, Gabriel Landeskog and Nathan McKinnon.

Much like the wise McClure says about the Hawks – when the names that matter show up on the score sheet for the Hawks multiple times, they generally win – the same is triply true for the Avalanche as their roster is even more top heavy.

–Another thing that should’ve clued you into the Hawks state of caring was Gabriel Landeskog’s short-handed goal. Throughout the season, Brian Campbell has been very aware of opposing penalty killers and when they’re cheating on the drop pass. In fact, I distinctly recall pointing it out on several recaps.

Instead of making the drop pass, Campbell will recognize the giant skating lane and establish possession on the opposing blue. On Tuesday night, Campbell decided to make a drop pass even though Landeskog was pretty obviously hanging around the Hawks blue line waiting for it.

Not that Campbell was the only to blame on the play, the Good Time Boys were still in decent enough of position to defend as it was 1-on-2. They both waved to Landeskog as he deposited the puck behind Darling to cut the Hawks lead to one.

–Michal Rozsival, despite not playing in a NHL game in nearly 2 months, completed a 120 foot pass to Marcus Kruger to spring him on a breakaway and the Hawks third goal. Colorado Avalanche, retire bitch.

–This was another good example of Sam’s hypothesis that as goes Duncan Keith, so goes the Hawks. Even if the Hawks were too busy enjoying the sights and smells of Colorado, allowing 51 shots on goal is an impressive feat of not caring. Then again, they iced a defensive unit featuring two guys (Rozsival and Kempny) that haven’t played since 2016 (exaggerated for effect).

With no Keith, Brian Campbell and Johnny Oduya got to play much more against top competition. That wasn’t very fun to watch.

–The Slog of the Regular Season only has 2 more stops and the league has saved the worst for last for your Chicago Blackhawks. Thursday in Anaheim will no doubt be annoying as the Ducks are still fighting for the division (maybe) and Saturday in Los Angeles will just be hysterical as the Kings look to lock Darryl Sutter out of the locker room for the last and final time.