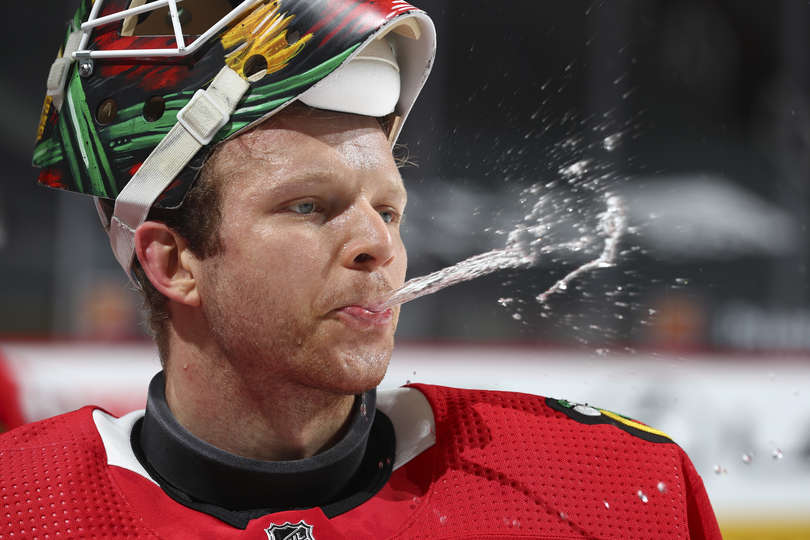 And so this weird year comes to an end much the same way that it played out in the larger scale, with the Hawks getting absolutely domed in attempts against, with their goalies and two actual scoring threats bailing them out as best they can, and no one seems to learn or gain anything from it. And so the Hawks enter into the offseason abyss with next to no growth from any player that might be of substance later on. Sure there were flashes of tools that guys exhibited occasionally, be it Philipp Kurashev’s speed in traffic or Adam Boqvist’s presence in running a point during a power play or the surprise of Wyatt Kalynuk’s all around game, but nothing that could be said of a player getting better BECAUSE of the structures that are currently in place, and that’s what makes all of this feel so futile.

As of press time, there is no indication on any channels, forefront or otherwise, that the Hawks are planning on making a coaching change. And given that this season was entirely without Jonathan Toews and mostly without Kirby Dach, as well as the weirdness do to Covid baked in, the excuses were always going to be there. But there has been nothing in now damn near three full seasons to show that Jeremy Prinze Jr. should get a fourth Magic Training Camp to teach a defensive system that no one else at any level of hockey runs, and is an abject failure by literally any possible metric. Since taking over on November 8th 2019, the Hawks are last in the league in shots allowed per 60 minutes of 5v5 play by nearly a whole shot behind the god awful Senators, last in scoring chances allowed, and last in high danger chances allowed. This is not a resume that warrants continued employment. It’s not getting better, and there’s no adaptation whatsoever. Even up until the dying seconds of the last meaningless game of the season, the Hawk defensemen are still running around switching sides and following their checks above the hash marks and even out to the blue line, and not just established fucking dopes like Nikita Zadorov. It only ever takes one pass to absolutely vivisect this defense, and often times, as it was last night, it’s to a guy who has been standing alone at the doorstep for upwards of 5 seconds or longer. This should be utterly grotesque to anyone with even the slightest bit of hockey sensibilities, but apparently it’s not enough for Stan Bowman, now in full command of this space station, to alter the trajectory of what is going on here.

Whether he realizes it or not, and assuming Toews comes back, this team has two years left to try to interject itself into any kind of conversation about competing. The contracts of Keith, DeBrincat, Toews, and Garbage Dick are all up at the end of the 2023 season, and it’s likely safe to assume that at that point Toews and Keith will retire, and the other two will be sick of wasting their fucking time here, because that’s what this is as long as Vinny Del Colliton is employed. He is an impediment to literally anything they want to try to do, any projects they may want to take on via trade or free agency, because this is just ghastly and completely counterintuitive to the point of being detrimental to young players. And on top of this foundation built on the fucking Tolkien-esque Dead Marshes, he does not put his players in the best situations to succeed whatsoever. Dominik Kubalik somehow can’t crack 12 minutes a night and David Kampf is a completely unutilized tool for taking defensive zone draws and flipping the ice because this cipher of a coach has no interest in line matching, ever. And to top it all off, in regular season games they absolutely have to have, this team not only folds, but is barely competetitive. And in a strictly interdivisional schedule this year, allowing two of the seven teams to take 30 of the 32 points available from is an absolute affront to the lord. If that isn’t a fireable offense on its own, then absolutely nothing is, and none of this matters.

If this sounds nihilistic, it’s because it is. Jeremy Trestman as coach is not working, has never worked, and will never, ever work regardless of the roster he’s given. All the trades with all the newfound cap space isn’t going to do a damn thing when everyone is running around the defensive zone like a fucking clown car, and next year the Hawks will have to deal with an Avs team that will utterly dismember them on the regular, a forward corps in Winnipeg that’s still strong, and a Wild team that somehow now has some legitimately exciting and skilled forwards as opposed to 16 games against the Wings and Jackets. The Red Wings, who themselves finished with more regulation wins than the Hawks, as did the Senators and Kings by a wide margin, and all of whom were declared full on rebuilds before the season even started. Meanwhile this moron keeps getting chance after chance after chance, and it’s enough.

Anyway, ON THAT NOTE, thank you for those who have stuck with this all year, and who have stuck with us throughout the seasons. Thanks to Jon and AJ and Summer for their outstanding contributions in this slapdash season. There will still be periodic posts as events warrant and the playoffs progress, and the podcast will remain at least semi-regularly. Thirteen seasons of this now in the books, christ almighty.