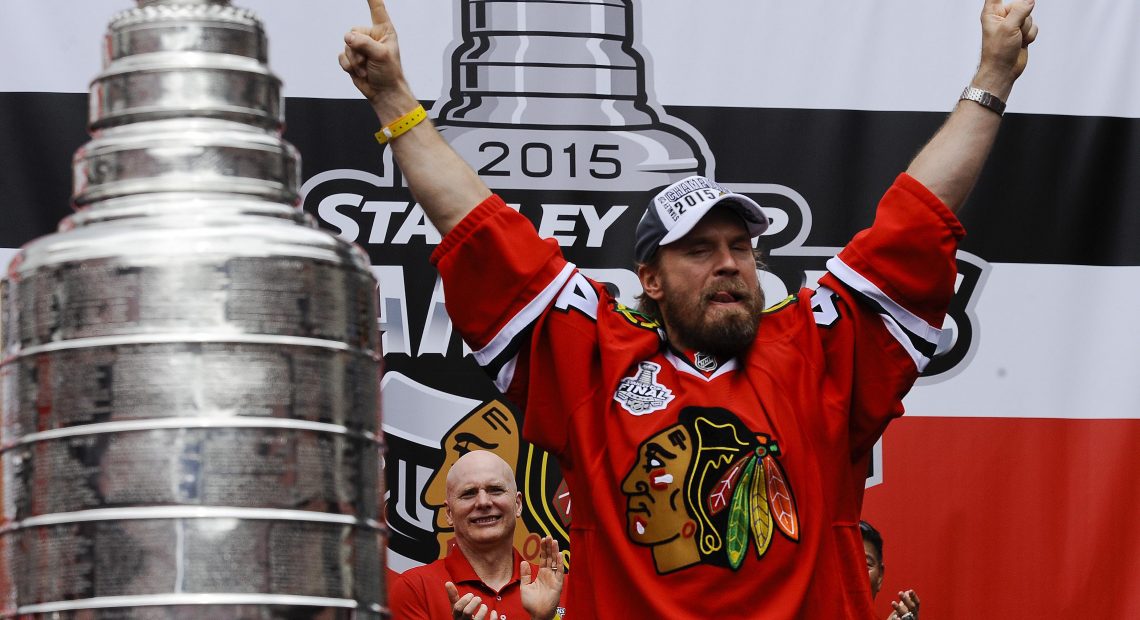 Let’s all enjoy this picture. And any other pictures that feature Kimmo Timonen with the Stanley Cup, for that matter. It’s almost a cliche at this point but this is the special part of a Stanley Cup celebration – the once-star player who has never won but achieves immortality in his final season.

I bring this up because there may come a time in the not-so distant future when the glow of the Cup is gone; the Hawks are coming off an early playoff exit and suddenly the Timonen trade will be flipped to be considered “another” Stan Bowman flop. As if there wouldn’t be plenty other places to look. You see all these pictures with Timonen and you’re basically admitting you don’t have a soul if you’d rather have those two 2nd round picks.

Anyways, that’s not why I’m here. Well, sort of. Sam brought up an excellent point in his last blog in regards to the Patrick Sharp trade and the Blackhawks insistence on receiving roster players. It’s a conversation I’ve had with a few different observers as well and I’m certainly in agreement with Sam and the rest that I wouldn’t have minded a straight up swap for picks.

That’s assuming, of course, that such a deal even existed without maintaining some salary. Logic would dictate it may have when you examine other deals, but the Hawks aren’t about to go back in the business of paying players big salaries to play somewhere else. They’ve already lived through the Cristobal Huet and Rostislav Olesv era and Patrick Sharp (regardless of personality issues) is neither of those.

As many general managers have always said, no move or trade is done in a vacuum. So with that, it’s probably best if we educated ourselves on the Hawks draft selections in 2015 through 2017.

The Hawks selected 7 times in the 2015 Draft. None in the first round and then every round after that with two picks in the 6th round including Prospect Camp du jour Roy Radke.

In 2016, the Hawks have 8 draft picks. Their 2nd rounder now belongs to Philadelphia as part of the aforementioned Timonen trade. Here are the rest:

In the 2017, the Hawks currently own every pick except their 7th rounder which now belongs to San Jose as part of the Andrew Desjardins-Ben Smith trade.

Going back to the 2010 Draft, the seven draft choices the Hawks had this year are the fewest. They never had less than 8 before this year and even had as many as 11 in 2011. (And the only guy yet to play an NHL game of their first 5 picks that year is Mark McNeil, which is kind of bonkers.)

What does all this mean?

It seems to me the Hawks are pretty confident in their ability to scout, draft, sign and develop. They have spent the last 5 years stockpiling picks ensuring they always had at least one more pick than the minimum. Even with a few of those drafted players getting eventually flipped, they always got guys (or picks) in return who were under team control (with the exception of the Vermette/Dahlbeck deal which further shows you how rare it was for the Hawks to pull the trigger on that deal).

They certainly didn’t envision this past season as their last run at the Cup. If they did, this year’s draft would’ve probably looked very similar to that 2011 Draft where they had no problem flipping NHL proven players for draft picks.

They also insulated their system well enough that they could afford to “only” draft seven players this year. There wasn’t that sense of urgency to get a bunch of guys into the system like previous drafts. That also speaks volumes to where the Hawks system was at the beginning of Cap Purge 2010. People love to shit on Stan Bowman but if he had drafted Kyle Beach or Jack Skille instead of the list of players you’ve all heard about in the 1st round, every mouth breather from here to Oak Park would be lining up down Madison to let him know what an idiot he is.

All that said, I’m still probably in Sam’s camp where I would’ve preferred the picks. Maybe I’ve played General Manager mode in Madden ’05 a few too many times and stockpiled a ton of picks when I traded Adewale Ogunleye after the Bears three-peated and he was two-time defensive MVP, but I sort of like the idea of getting as many bites at the apple that is the NHL draft as you can.

Then again, I also see the appeal of adding roster players.