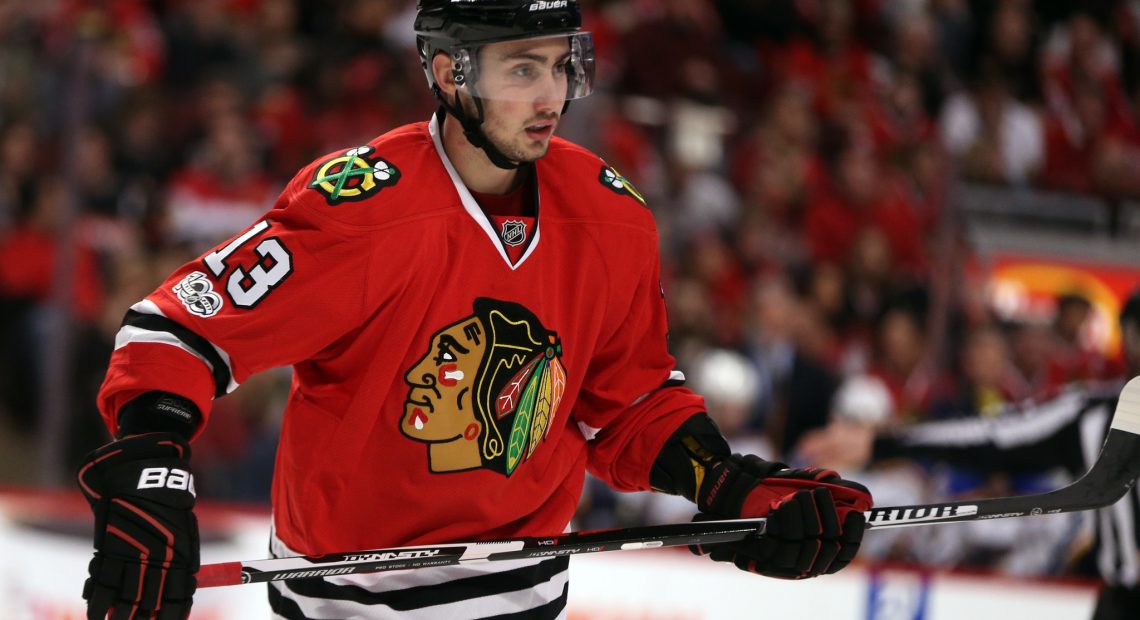 It seemed like Tomas Jurco played more than just the 29 games he got, but that’s the number. Maybe it’s because those 29 games were such a slog thanks to the goaltending they felt like 60. That’s not Jurco’s fault. Anyway, Jurco ended up being a pretty effective 4th liner. The question is will it matter in the least going forward.

The interesting thing for Jurco is what he’ll mean for how the Hawks will build their roster going forward, but we’ll get to that. Jurco always seemed like a tweener in both Detroit and here. He wasn’t really skilled enough to break your top six, but he wasn’t grind-y, sandpaper-y, fart-y to be on the bottom six for coaches who only saw the game one way. Even if you wanted to do the patented “3+1” model the Hawks have either had or strived for, getting him on the top nine was a real squeeze. We’re talking about a guy who in basically 3+ seasons in the NHL has only managed 22 goals and 50 points. If he were really that skilled, he would be clobbering bottom-six opposition which he was facing. That was most certainly not the case before this year.

But this year something seemingly changed. He looked spikier, there was a little more oomph or punch to his skating and playmaking in the offensive zone. And he wasn’t a disaster in his own by any means. Jurco was also attached to Artem Anisimov his entire stay in Chicago, which you wouldn’t think would accentuate what he does well, and Anisimov was more than competent with him and pretty much a disaster without him (39.8 CF% away from Jurco). Perhaps with a quicker and more skilled set of linemates, Jurco’s abilities could really shine as he does have vision and he does have a sense for the net.

Outlook: Here’s the problem for Jurco. Barring any disasters or trades, the Hawks have a pretty big group of forwards guaranteed spots next year. Toews, Saad, Kane, Schmaltz, DeBrincat, Sikura, Ejdsell, Hinostroza (maybe?). That’s eight right there.  You’d have to think Duclair would have to go way out of his way to not get a spot either. They may be serious in not wanting to trade Anisimov, which is 10. You can totally see them re-signing LOCAL BOY Tommy Wingels again, which is 11, basically leaving one or two spots on the team. And given their fascination with size, John Hayden will once again get every chance to bungle away a spot because he just will, and Highmore and other Rockford flotsam might get looks as well.

But to me, what the Hawks do with Jurco (he’s an RFA) will say a lot about how they’re going to build their team, and if they’re going to change the thinking in doing that. Because if the Hawks are looking around at the Preds, Knights, and Penguins, and one or two others, and just decide they’re going to pack the forward spots with as much speed and skill as they can, Jurco has a place. If the Hawks are going to employ more of a “Get It The Fuck Up The Ice As Quickly As Possible” style that the league will go to more and more, Jurco has a place on the third or fourth line (and Anisimov, Hayden, and Wingels most certainly don’t). He can get you goals against bums on the other teams’ nether regions.

But if the Hawks stick to their third line being a “checking” line and/or the fourth line being the home for wayward children who don’t read good, then Jurco probably doesn’t have a place. He’s not going to be a checker, and he’s certainly not going to be a grinder. Maybe if you squint he can be a homeless man’s Michael Frolik, but Michael Frolik’s are unicorn in nature. And even Frolik was more of a nod to packing your forward corps full of speed and fury. Bolland-Kruger-Frolik is a fourth line you’d see in today’s game. The Hawks were ahead of their time and seemingly have ignored it since.

Jurco won’t be expensive. He’s due a raise of just $80K and will probably clock in at $900K or so. Given the candidates, he seems to provide as much or more than anyone else who could warrant a bottom-six role.