Well Pilgrim, Not Until You Eat the Peanuts Outta My… – FFUD’s Player Reviews: Jonathan Toews or Time To Eat Meat Again 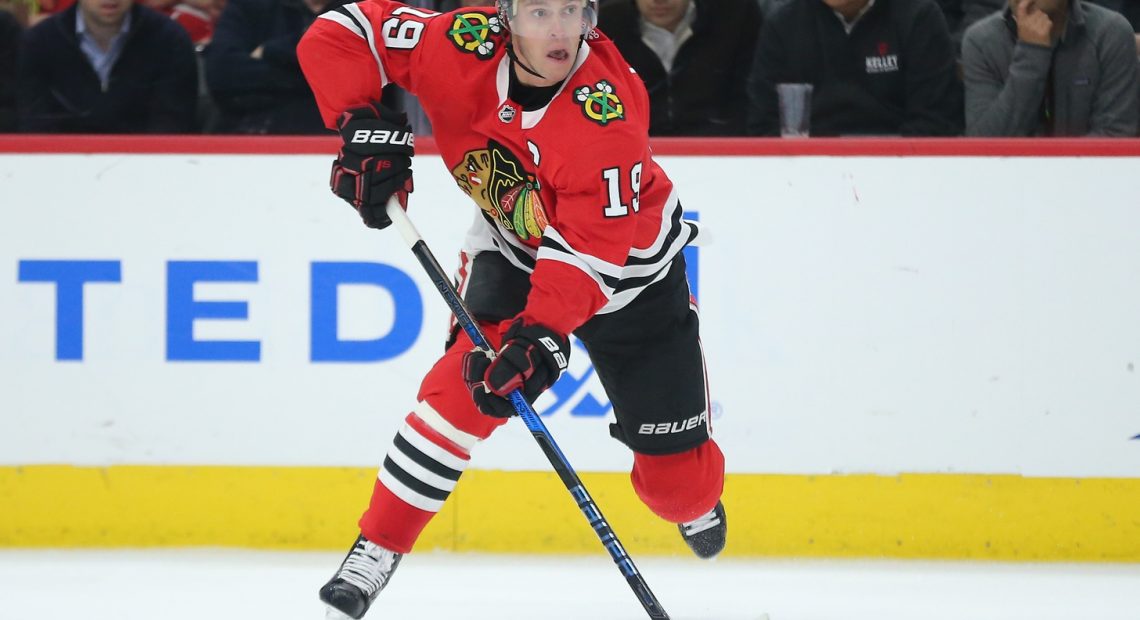 For the second straight season, it felt like we watched Jonathan Toews go through a year in which he played very well, had solid underlying numbers, and yet due to voodoo or bad luck or the lack of lean meat in his diet he couldn’t find the score sheet. The hilarious part is he still put up 20 goals and 52 points in 74 games, which is still pretty damn good. But his paycheck and role demand more, and his play deserved it. Shall we?

I think there’s a lot of value in bookending the preview/review process with players as a writer, which is why I wanted to do this review for Toews after doing the preview earlier this year. Honestly, before looking into any of his numbers, I went back and read said player preview. That presented me with a problem – I, uh, think I might end up repeating myself from that post a lot.

That’s because, like I said to open this one, Toews had another year comparable to his 2016-17 campaign. He had elite shot metrics with that 56.14 CF, the expected goals was nicely in his favor as well at 53.09, and yet a career low shooting percentage drives the production numbers down. Compare those expected goals to his actual GF% of 50.57 and it gives you an even better scope of just how bad his luck was. Spending damn near the entire year with Brandon Saad, who was going through the same damn thing (TEASER: review coming tomorrow from Mr. Pullega), didn’t really help matters.

Let’s play a projection game. After shooting 9.5% this year, his first time below 10% in his career, Jonathan Toews’ career shooting percentage has now dropped to 14.1 percent. If he simply shot that rate this year, he’d have scored 10 more goals. 62 point year in 74 games. That’s good.

Before these last two years, Toews was shooting 15.1% on his career – and while a one percent drop probably doesn’t strike you as huge, to drop a goal per 100 shots after just two seasons is kind of insane. If Toews had shot at 15.1% this year, he has 32 goals. Again, good.

And again Brandon Saad’s career low shooting year definitely impacted Toews as well, likely on the assist side of the ledger. I won’t dig too much into the numbers so as not to steal Pullega’s thunder for tomorrow, but if Saad shot his career rate this year, I bet Toews added anywhere from 2-8 assists to his ledger as well.

So the ultra-optimistic side of this projection game puts Toews at 32 goals and 40 assists, and if you play slightly more conservative you have him at 30 and 32. Either way, you’re looking at somewhere in the 65-70 point range in 74 games played. That is damn near elite production in today’s NHL. “But Twitter told me the sky is falling on Jonathan Toews,” you say! Twitter is wrong. It is always wrong.

A while back I compared Toews to Anze Kopitar, and that comparison is still apt. Kopitar had a much worse 2016-17 than Toews in the luck department, but things swung his way in 2017-18 and he ended up with career highs in shooting percentage, goals, and points, and all of that earned him a Hart trophy nomination and he just might win the damn thing even though it should go to Nathan MacKinnon. But here’s the most encouraging part of Kopitar’s huge year as far as it applies to Toews – his combined shooting percentage from last year with a career low shooting percentage, and this year with the career high, sit right in line with his career numbers and his typical fluctuation of his career.

Obviously there are flaws to some of this numerology I’m doing, but the over-arching point is that things aren’t all bad for Toews unless there is more to this whole thing than shooting percentage. The overall numbers don’t indicate that there is, though, meaning that unless there is some lingering injury that is somehow leading to the decline in shot conversion, everything we know about numbers and regression indicates that Captain Vegan is due for a correction.

And if all else fails, maybe he should start eating steak again. How the fuck could anyone give up steak?