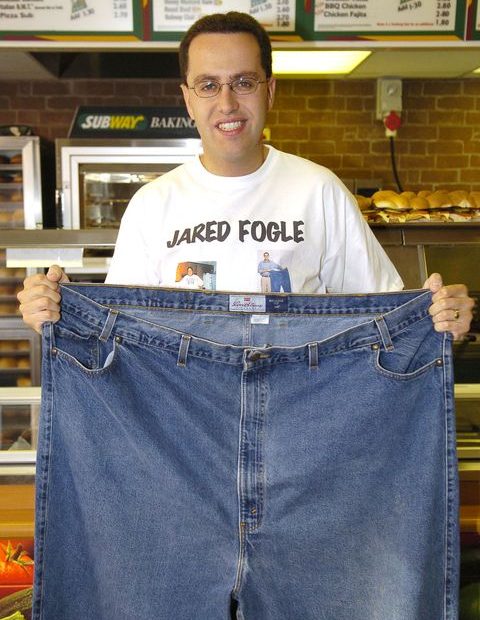 The 2019 LA Rams started the season with Super Bowl aspirations; but thru nine games, they are treading water. The walls are closing in quickly and the doubters have been out in full force. Rams QB Jared Goff is currently ground zero for criticism and his offensive line is among the worst units in the league. This all sounds too maddening familiar, doesn’t it?

Goff is averaging 292 passing yards per game, good for 6th best in the league; this is clearly not the issue. What is killing the Rams is Goff’s 11-9 TD to INT ratio, which is near the bottom of the league and comparable to the great Sam Darnold, Andy Dalton, and Ryan Fitzpatrick. The TD/INT numbers are especially shocking given his 2017 and 2018 Pro Bowl seasons where threw for 60 TDs and 19 INTs combined.

Coming off the two previous seasons where he was a combined 24-7 as a starter, this year’s 5-4 mark screams Super Bowl hangover. It has also raised the big question we are asking here in Chicago: “Has this offense been figured out?” This question was asked even louder with last weeks loss to the Steelers, where the Rams scored 12 points. Coming off a bye week.

Right now, the Rams are elated they are playing in a market that really doesn’t give a fuck about sports. If they were here, or Philly, or New York, or Boston – this teams struggles would be front and center every day; which in turn, would magnify the way Jared Goff has given balls away like he’s Bruce Jenner.

So, after reading all of this, do the Bears have a chance this Sunday? Maybe. This isn’t the 2018 Bears defense, far from it, but last year, Goff had the worst game of his career against Vic’s Fangio’s guys – throwing four INTs and completing only 20-44 for 180 yards.

If he wants to redeem himself from last years abortion, Goff is going to rely heavily on WR Cooper Kupp, who not surprisingly, is a white guy. But Kupp is coming off a game last week where he and I had the same numbers of catches. What makes last week’s performance even more bizarre is that Kupp went for 220 receiving yards the game before. Look for Goff to make Kupp a priority early and often on Sunday and expect big things from the tandem.

Additionally, look for a big game from Robert Woods, who will get a lot more looks with Brandin Cooks out this week. Woods has yet to see the endzone this year, but with almost 13 yards per catch on 45 receptions, it’s only a matter of time until Woods scores six.

Tight end Gerald Everett ranks in the top-10 at his position with 34 catches for an average of 11 yards per catch and over 40 yards per game. As a maddening point of reference, Bears future Hall of Fame TE Adam Shaheen is averaging nine receiving yards and 1 reception per appearance. Sweet!

Underused and struggling Todd Gurley doesn’t pose much of a threat out in the passing game out of the backfield, averaging only 1.5 catches per game. Rams coach Sean McVay has relied less and less on Gurley in both the run and pass; a decision which has not sat very well with the once elite running back. If McVay wants to quiet some critics and appease his star, look for the Bears to get forced fed a steady diet of Gurley.

So, in a worst case scenario for the Bears, what does Goff do this Sunday night?

Well, here’s your answer, and it’s not pretty: 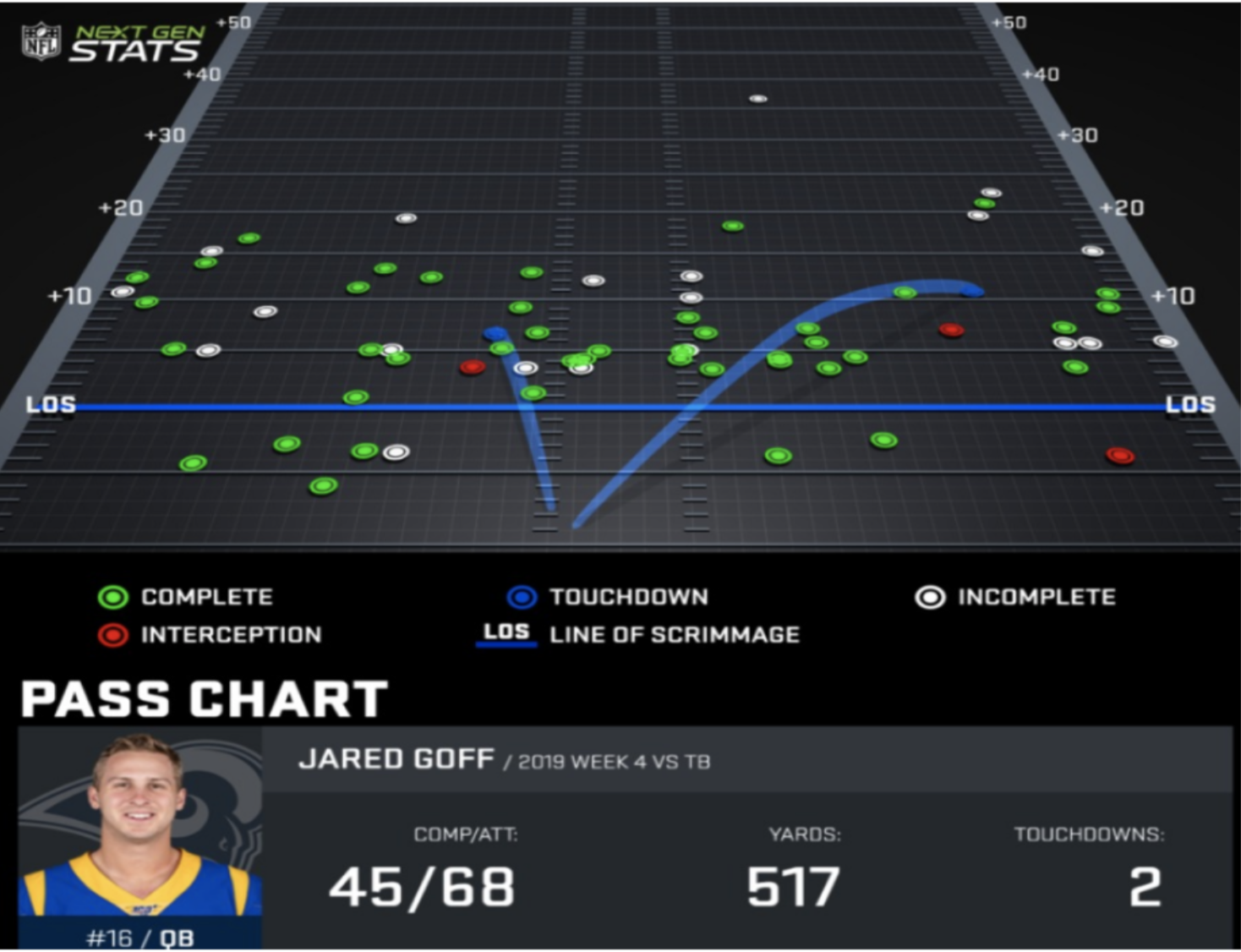 OK, so then what is the best case scenario for a somewhat struggling Bears defense?

Take a peek at Goff’s Week 6 performance against a solid 49ers defense: 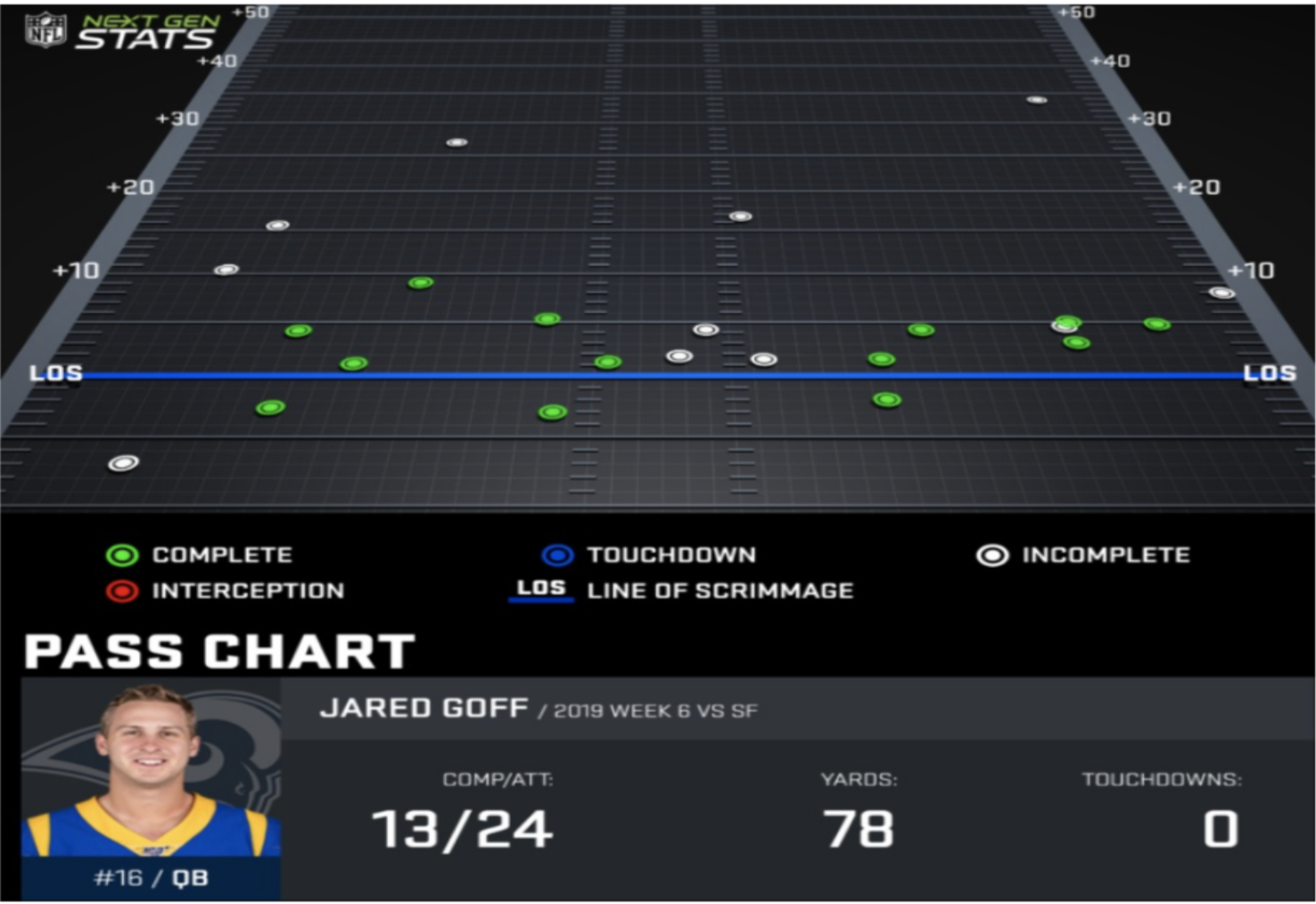 As you can see here, Goff wasn’t able to complete a single pass over 10 yards. This type of offensive game-plan fits very well into the Bears defensive scheme due to the speed of the linebackers and athleticism of the defensive line.

What does it all mean?

This game lies squarely on the shoulders of Jared Goff. If Goff is good, not even great, the Rams will win handily. But if Goff replicates last year’s performance against the Bears or his Week 6 struggles against the 49ers, the Bears will win a very low scoring game.