We Comb Our Hair Like Maurice Richard: Blackhawks 1 – Canadiens 2 (OT) 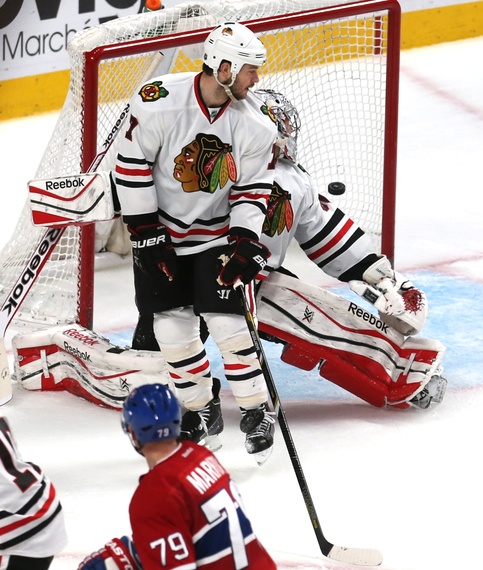 Flat, bored, slow, disinterested… whatever you want to call it, the Hawks simply weren’t in this one pretty much from the national anthems (and I really love hearing “Oh, Canada” sung in French). Taking two back-to-back penalties for tripping Daniel Briere leading to pretty much a full four minutes short handed throws off the entire game, especially since Q had hit the blender to try and spark a team that has hit a slump in the last few games. Instead of settling in with their new teammates, they were running around on the kill and saw the Habs outshoot the Hawks 10-7 in the first.

Things didn’t improve in the later frames as the Hawks gave up 12 shots in each frame without breaking double digits for themselves. This wastes a pretty phenomenal effort from Crawford as he returned to his hometown and stood on his head. It’s not terribly often that you’ll see the losing goalie get a higher star than the winner in a low scoring game.

So while the Hawks have definitely hit a rough patch lately, it’s nothing to get too worked up about at this point. The Hawks had one of their sloppiest games but still managed to squeak out a point off one beautiful rush up the ice from the Red Wedding line. I don’t remember seeing a game where the Hawks gave up so many uncontested pucks or had so many lazy icing calls but the season goes on and they’re still one of the best teams in the league. Don’t rest on this too long though, the Blues are pretty much even with games in hand… yikes.