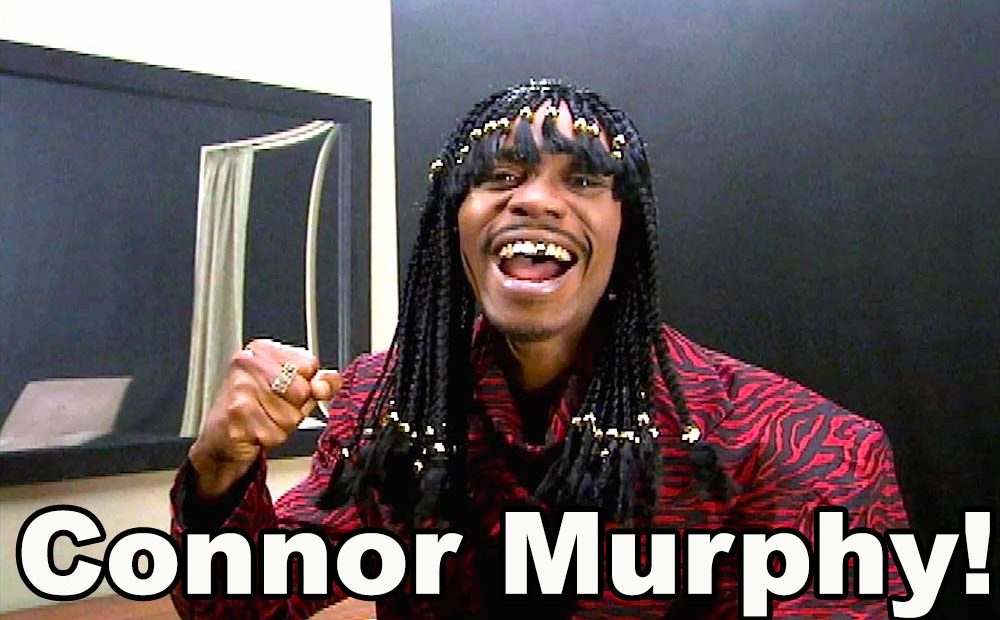 You may be wondering what would be the point of watching the Hawks the rest of the season. We go through that as well. So it’s probably part of our job to point out stuff for you. It should be things that portend to a brighter future, no matter how incremental. So here’s one: since returning from injury, Connor Murphy has been the Hawks best d-man, and it’s not even particularly close. Yes, that’s not much of a claim given the state of the crew, but you asked for anything.

What’s been startling about Murphy in just six games is that he’s immediately been tossed into the dungeon as far as zone starts and competition. Overall, Murphy has started just 40% of his shifts in the offensive zone, and over the past four games that’s just 29.5%. For references sake, the lowest Off. Zone start % in the league among d-men is around 33%, so if Murphy keeps this up he’ll lead the league in it by some distance.

And that hasn’t really meant Murphy is getting his head kicked in. There was the ugly game on Sunday against the Sharks, but the Sharks will do that, especially when the Hawks pretty much were in mourning over Crawford and Cam Ward didn’t know how his legs worked. Murphy was equally buried against the Jets the game before, starting just 20% of his shifts in the o-zone and over half in the defensive zone. He and Dahlstrom were faced with Scheifele and Blake Wheeler all night and still managed a 45% Corsi, which considering the circumstances isn’t ridiculous. Last night saw him pitted against Johansen and Fiala, which isn’t a full-strength top line for Nashville to be fair, and though they did get the Preds’ one goal the Hawks ran over that line most of the night to the tune of a 55% share and 64% scoring-chance share.

It is just six games, so he’ll have to keep it up, but Murphy’s relative scoring-chance percentage, high-danger scoring chance percentage, and expected-goals percentage are all top-1o in the league at the moment. He’ll probably be hard-pressed to keep these going if he’s getting just 25% of his shifts in the offensive zone and starting so much in the defensive zone, as well as facing the hardest competition in the league in terms of Corsi % as he is now. But it is highly encouraging. Especially as we thought he wouldn’t be able to bend over after back surgery.

Funny enough, another d-man with some truly torturous zone-starts is one Niklas Hjalmarsson. And all of Murphy’s numbers are the same or better than Hammer’s, so if everyone could shut up about this trade for like five minutes that would be truly helpful to everyone else involved.

The reason is clear. While Jeremy Colliton may be getting a ton of things wrong (though the past few games have been better), him simply not being Joel Quenneville is doing wonders for Murphy. Last year, Murphy knew that any hint of a mistake would see him tumble down the lineup, benched, or scratched before Q retreated to his office to apologize to the alter of Hjalmarsson for failing him, followed by Q would covering himself in ox blood. Now Murphy knows he has a prominent spot and he’s not going to lose it at a whim.

The knock before on Murphy was that he couldn’t take on the top lines and competition, and only four games of doing so is not proof that he can, of course. And even if Murphy were to end up being a high-end second-pairing guy, that’s a nice piece to have around and really the absolute maximum Hammer could have offered you going forward, and for not as long.

Because while the Hawks have a logjam now on the blue line, mostly of crap, it gets worse next year. We know that Keith, Seabrook, Murphy, Jokiharju are locks to be here, for varying reasons. If I were to guess, two of Boqvist, Beaudin, and Mitchell will be as well. That’s six, and none of them have yet proven to be top-pairing players, or have proven they are very much not. Which means if the Hawks plan to turn it around quickly, and they probably need to, they’re going to have to also find a way to bring in a genuine, top-pairing player, If Carl Dahlstrom continues his superb play, he’s also in the discussion.

The Hawks could alleviate some of it by playing seven d-men a night, which more teams should do anyway. But that won’t solve it all. If Murphy can continue to play well with the toughest assignments, it makes the picture next year at least not as daunting.