Turns Out You Can Change Yoan’s Mind 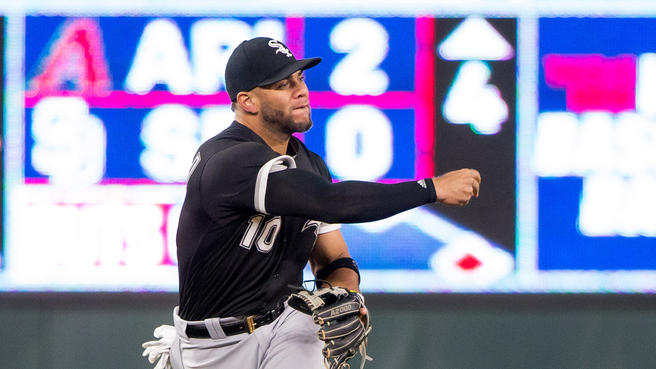 As usual at this point in the season, not even a week in, it is folly and silly and other words that end in -lly to draw any grand conclusions. Anyone can have a hot week. Still, with as much riding on Yoan Moncada this season, we’ll forgive any Sox fan from having a chuckle at his first few games of 2019 (and basically we mean Fifth Feather, who needs all the chuckles he can get).

Last year did not go as a first full-season should for Yoan or anyone as prized as he is. He struck out a ton, played second base like he was being attacked by bees, and when he did make contact a bit too much of it was on the ground. Thankfully , this year has started in opposition to all of that.

Moncada has been something of a curious study because he clearly has a very good concept of the zone. He walks over 10% of the time. The natural conclusion is that with that kind of eye he should be able to get the bat to the ball whenever he wants. It doesn’t always work that way, and this is where Adam Dunn flashbacks occur for Sox fans. In addition, Moncada let a lot of pitches just go by him in the zone, only swinging at 60% of pitches in the zone (league-average was 66%). He was a bit too choosy, which if you have a Jewish mother like I did you’ve been yelled at about frequently.

That’s gone out the window so far, as Moncada is swinging at just a tick under 70% of the pitches he’s seen in the zone, and making more contact on them (85% this year to 80% last). Which is leading to some pretty hilarious numbers. The one that jumps out at me is that of Moncada’s contact, only 5% of it has been considered soft. Last year that was at 14%, which isn’t awful but clearly cutting that by nearly two-thirds is something to note. That mark is almost a quarter of the league-average.

To boot, Moncada is getting the ball in the air far more so far, at 52.9% of the time (40% last year). Now, Moncada isn’t going to carry a 22% HR/FB ration all year, and if he does it surely means the end of us all. But clearly, the fly ball revolution has now absorbed him into the cause.

As far as approach, a big difference we’ve seen this year so far is that Moncada isn’t helpless against a change-up. Last year, Moncada whiffed on nearly half the swings he took at change-ups, hit .205 and slugged .351. This year, on an admitted limited sample, he’s only swung and missed at 11% of the swings he’s taken, is hitting .500 and slugging 1.000. The obvious conclusion is that Moncada isn’t jumping at the ball the same way and being content to take a fastball out to left. Not rally the case here, as Moncada doesn’t really do much when he hits the opposite way but is murdering the ball when he pulls it. Either way, the Sox will take it.

If exit-velocity is your thing, Moncada’s average has risen from 90.6 MPH to 96.1 this year. Last year, the leading average exit-velocity was 94.7. So yeah, he’s cracking eight different kinds of shit out Rawlingses everywhere. Also, if you’re into this kind of thing, his barrel-percentage is nearly double so far over last year.

Again, anyone can have a hot week. And his .467 BABIP is not anything less than astronomical. But the changes in approach and the volume of contact (loud, not amount) suggests he will always carry a higher BABIP than normal, and that these changes are around for a while.