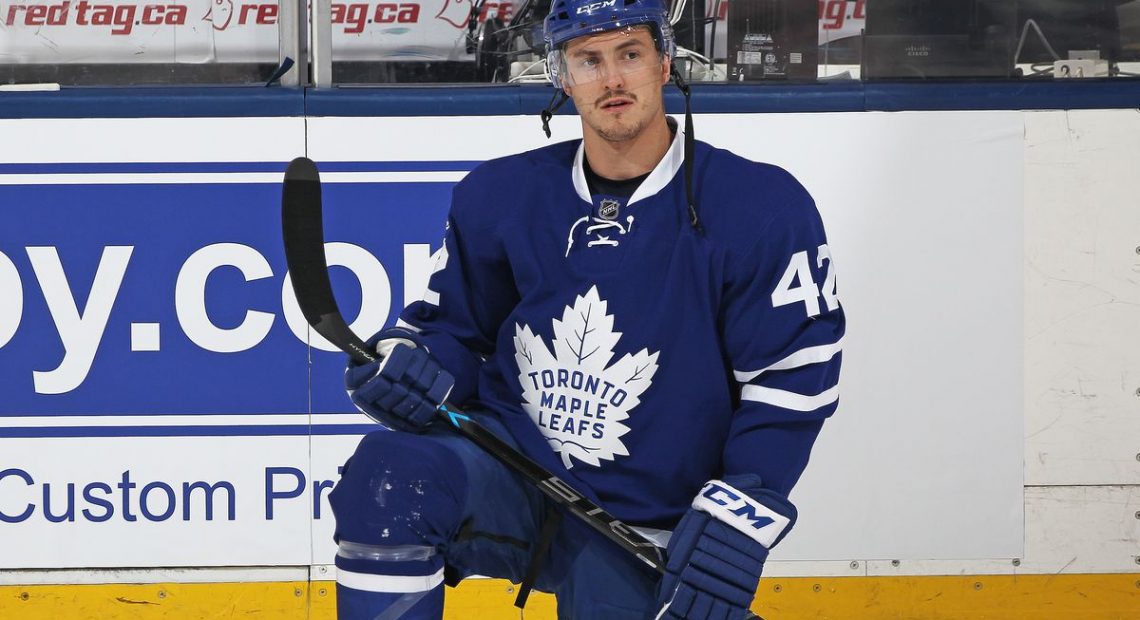 I can’t believe I’m about to write any of this.

Tyler Bozak used to be a joke in the NHL. That’s probably giving him the best of it. He was among the best pieces of satire and a huge piece of evidence of what was wrong with the Leafs, the league, and quite possibly the world itself. This is back when the Leafs were using Bozak as a #1 center and he held onto it by basically being Phil Kessel’s buddy, whom everyone hated anyway. So naturally, the knives, pitchforks, torches, and trained badgers were all out for Bozak for years in Toronto and he didn’t even sell the hot dogs. He was basically blamed for all he wasn’t, which was all the #1 centers Leafs fans just assumed would come traipsing into Toronto because no one would ever want to play anywhere else, of course. Leafs fans have never gotten around the truth that most every player would rather gnaw their own balls off instead of ply their trade in front of that baying horde of fuckwits who will curse out the player’s ancestors the minute they turn the puck over in a preseason game against Ottawa.

Anyway, Mike Babcock arrived and after exclaiming, “Just what the fuck have they been doing with this guy?!” got Bozak some proper usage. And then Auston Matthews arrived, slotting Bozak perfectly behind him and checking center Kadri. And lo and behold, for about three seasons now, Bozak has been a really effective player.

On Toronto’s third line for the past two seasons, Bozak has paired with JVR to form a pretty in-your-face weapon. Bozak piled up 55 points two seasons ago, dropped to 43 this year which can almost be solely attributed to his SH% cratering from 12.1% in ’16-’17 to just 7.1% last year. Bozak is a career 13.8% shooter, so even the mark from two years ago is low. All that considered, you can basically bank on Bozak giving you around 18 goals and around 35 assists and that’s a 50-point player and yeah, you take that below your #1 center.

Metrically, Bozak has been kick-ass for three seasons as well. Since Babs showed up and quickly declared him not a #1 center, Bozak had a +4.5% Corsi-relative last year, +1.4% the year before that, and +3.8 the year before that. But this is where the caveats come running in from behind the stove, waving their arms in protest.

There’s no point in signing Bozak unless you’re going to try and mimic the usage he’s had lately at the ACC. Bozak and JVR have started a majority of their shifts the past two years in the offensive zone. When Bozak has been asked to start more shifts in his own end than the other, it has not gone well, save for the Season-In-A-Can of 2013 where basically nothing made sense and God took his leave of all of us (I mean, I was even happy then). Granted, those were worse Leafs teams than these current ones, but it’s best to view Bozak as an offensive weapon and not much else.

Which makes him a tough fit here, even if you could make the money work (we’ll get to that) and pair him with his running buddy JVR. Because those “hammock” shifts have to go to Nick Schmaltz, who weighs 89 pounds. You can’t ask Schmaltz to start more in his own end to accommodate Bozak, because that’s going to devolve into recess time at that hippie preschool down the street. And if you’re going to consign Toews and whoever’s with him to the dungeon all season, you’re probably not going to get first line production out of that unit. Again.

Still, if you could only slightly tilt Bozak’s zone-starts and assignments toward the harder and slightly farther from the other goal, you can probably get away with it. It would be a delicate balance.

The problem is what he’s going to cost, and this is the same problem a team would have with Paul Stastny. Whatever team doesn’t get Tavares is going to feel a need to sign any center to make themselves feel better as they hug their John Tavares-adorned pillows at night. He seems gone out of Toronto, but you could easily see San Jose or Dallas wanting to slot him behind Thornton or Seguin or another team behind whoever else. Which means he’s probably getting more than the $4.2M he just had in Toronto.

Trying to find comps are hard. Kadri’s $4.5M would almost certainly barely be a starting point. He could easily make a case for Derek Stepan’s $6.5M, which is right out. Kyle Turris just signed for $6.0M per year, and honestly his numbers aren’t that much better than Bozak’s (which makes it all the more funny). If there’s any kind of competition for his services, $5.5M seems like the low end and somewhere north of $6.0 seems possible.

If the Hawks could get him between $5-5.5, I’d be inclined to give in a whirl, along with shipping out Anisimov’s bloated ass to the first port that’ll have him. Also, Bozak wins a ton of faceoffs which makes Q’s mustache flutter even if it isn’t that important, and Bozak is more mobile than Arty. You get a shooting spike with him and you’ll get the same 20 goals that you would from Arty, with far better playmaking. Yeah, the Schmaltz-Bozak Usage Conundrum (St. Vincent’s next album) is a concern, but isn’t that why Quenneville is the richest coach in the league?

Tags: Chicago Blackhawks NHL Free Agency no seriously it would be a good idea Tyler Bozak