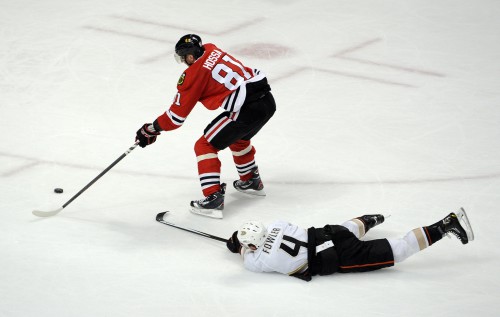 Oh right, they can do it.

We said if the Hawks performed like they did against the Avalanche on Tuesday that they would win far more often than they would lose. I don’t know if they were significantly better tonight than Tuesday, but they sure as fuck weren’t any worse. And it led to them essentially rag-doll the hottest team in the league that currently sits on the Presidents’ throne, save for a nervy five minutes there in the 3rd. Don’t worry folks, the driver is still in the bag when it’s needed.

For me, the big tactic from the Hawks was an uber-aggressive defense. Not so much in jumping into the rush, but standing up at the Ducks blue line, jumping the Ducks in the neutral zone to whatever puck carrier there may be, and standing up at their own blue line. The Ducks have given the Hawks fits with their straight-line game for years now. It seemed like the Hawks just decided they were going to blunt those lines at center ice. They wouldn’t even let the Ducks get the puck behind them and down low, and whenever they did they were 100-feet away. The Ducks certainly weren’t at their best, but they weren’t allowed to be for long stretches. Every time the puck gained control of the puck outside of their zone, they were smothered.

You can’t do that every game, as eventually you’ll give up a bevy of odd-man rushes to a team that’s ready to play that quickly. And the Hawks gave up a couple, but not many. It was high-pressure stuff, and the Ducks didn’t really have an answer.

-The first goal for the Hawks is a perfect illustration of why we’ve spent a lot of last year and this year stressing the gap between the forwards and the D on a breakout and using the middle of the ice to get out of the zone. Yes, it was shorthanded so that kept Toews and Hossa from fleeing early. Yes, it’s high risk but this is a skill team and they’re supposed to be able to make that pass. And Hjalmarsson is the one who has been least hesitant to make it, and you can see what can happen. When that pass is used, you almost immediately have beaten all the forwards already and are streaking against two d-men. It’s why we get so frustrated when the Hawk forwards don’t hang around long enough for it. No team could be more devastating than the Hawks when they’re making that play.

-I hope Hjalmarsson’s 3rd period turnover that led to Getzlaf’s goal won’t keep him from doing that again. I doubt it will.

-I feel like we’re going to have the same debate about Marcus Kruger’s line that we had about Dave Bolland. Bolland built a sterling defensive reputation while playing in front of Keith and Seabrook at the height of their powers. As we saw last year, it was more on the two d-men than Bolland. Now Kruger is getting the checking assignments while playing in front of Ebenholts och Elfenben at the height of their powers. Who’s more responsible for keeping the top threats quiet? Hard to tell. Whatever, it worked tonight.

-Once again, Bickell-Handzus-Versteeg was the best possession line, and that’s the line that started the most shifts in the defensive zone. They were a combined 32-6 in Corsi, and yet Bickell only saw 8 minutes again. Why? And if Steeg misses any time, I doubt this line would miss anything if Morin had to fill in for a few games.

-Kane and Saad were just a bit off tonight. I feel like this won’t last forever.

-Watching Teemu Selanne lose just about every race he was in was at once gratifying and sad at the same time. It was time to go last year, bud. But he’s earned the right to call time on his own career.

-Nick Leddy had a good first two periods, and the Hawks are just a different team when he’s driving the play on his shifts too. Maybe having the same partner for two games in a row does make a difference. And Leddy does play his best with Rozsival.

-Crow finally gets a win, but this habit of letting in one bad goal per game probably needs to stop. Though I feel confident in saying that without Hammer’s turnover, he probably gets a shutout tonight. Ah well.

Gotta keep it rolling Sunday for the B’s. But it is heartening to know that the Hawks can rub the Ducks’ ass in the moonshine.