This Above All: To Thine Own Self Be True 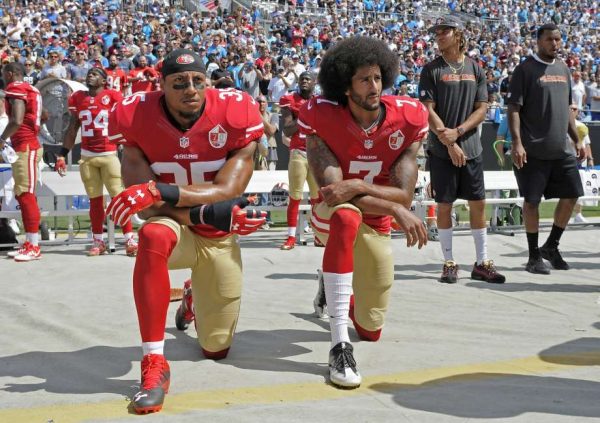 Let’s get one thing straight—the owners of NFL teams are terrible people. They’re succubi who feed off of young men, particularly young men of color, by profiting from the damage done to those young men’s short- and long-term health in exchange for a large sum of money that, while still large, is actually a fraction of the wealth of the owner, and more importantly, a fraction of the wealth that the player will bring to the owner, who ends up coming out way ahead in that deal. They’re succubi who feed off of taxpayers by extorting stadium funding, the receipts from which go overwhelmingly back to the owner, rather than the community that paid for the building. This is the most blatant of their extortions, but they also suck out subsidies and tax breaks that, like a slow bleed, drain resources away from the very community that is then threatened by the owner with the loss of their team.

They’re shitty people, but they’re not stupid. That’s why this whole disgusting mess created by Donald Trump is so ridiculous—by asking Americans to boycott a team or an entire sport, he’s asking people to boycott the product that the owners are selling. How or why Trump thought the owners would go along with this is beyond comprehension (until one remembers his number of bankruptcies and then it kinda starts to make sense).

The owners don’t care about their players, and they don’t care about the communities in which they (sort of) live. What they care about is their pocketbook, and if people en masse stopped watching a sport, and advertising revenue dropped, those pocketbooks would take a hit (please see: ESPN, traditional print media, and every other fucking industry upended by the internet and technological innovation disrupting the ad-revenue based business model).

That’s why they’re supposedly cool with players protesting. It’s not because they suddenly care about systemic racism or social justice; it’s because they know that fans love players a hell of a lot more than they love the rich asshole who owns the team and periodically threatens to move it out of town. They want people watching (and buying merchandise, preferably), and if they’re seen as kowtowing to this human circus peanut in the Oval Office, a large percentage of fans WILL stop watching or at the very least, teams that don’t allow players to express themselves will face a shitload of (deserved) bad press.

OK, shut up Lana, what does this have to do with hockey? Well, as this fair blog has covered recently, hockey owners are quite possibly the shittiest of the bunch. And if you weren’t sure, just look at the difference in the statements from the Golden State Warriors, and the fucking Pittsburgh Penguins being like fuck yeah we’re going to the White House. As if the Penguins weren’t maddening enough, now there’s this.

Maybe owners and league brass think they’re somehow insulated from these issues because of the number of non-American players, non-American teams, and the non-American roots of the game. I don’t know. Kaepernick taking a knee started as a protest of police brutality and endemic racism, but now the act of taking a knee (or staying off the field, in the case of a very different Pittsburgh team) symbolizes a protest against those things as well as against the owners’ shunning of Kaepernick and Trump’s calls for suppression of first amendment rights (it’s the first fucking one in the Bill of Rights…he didn’t even have to read past the first paragraph to know that speech and peaceful protest were protected).

These issues transcend both football and national boundaries. This is becoming an expression, through the social cohesion mechanism that is professional sports, of opinions on large-scale societal questions. If hockey owners had any sense (either moral or financial, and in both cases they pretty much don’t), they would take the opposite of the Penguins’ tactic and at least pay lip service to the idea that politicians can’t threaten or demand silence from the people who sacrifice their bodies for the gladiatorial blood lust of the public and the bank accounts of the owners.

And what about the players? Should they take a knee during the anthems? If I were a Canadian player, I might stand tall throughout that entire song. Now, no country is perfect, and I’m not even going to pretend that I understand the intricacies of Canadian social and political life. But what I do know is that in their last election they chose someone who is an ardent feminist, who wants to maintain welcoming migration policies and accept refugees from war-torn areas, and who is at the very least attempting to work with indigenous peoples to address horrible past policies and discrimination (there is some dissatisfaction with the pace of this change and rightly so, but Trudeau did at least talk about it at the UN this past week, which is a hell of a lot more than we can say about Trump’s blathering bullshit).

However, look at what happened in Montreal with P.K. Subban. Look at how the league still treats him like shit. Do you think that if a white player gave $10 million to a children’s hospital that Bettman wouldn’t use every tool at his disposal to broadcast it as far and wide and repeatedly as he possibly could? Don’t you think we would be hearing about it constantly from every damn announcer, every damn NHL Tonight host, every damn Rivalry Night or whatever, if it were Sidney Crosby, or Patrick Kane, or any other white player who’s really just a shithead?

Hockey players should take a knee. They aren’t exempt from these issues of race and social justice. They certainly aren’t exempt from discrimination, and they’re just as affected by censorious policies on free speech and the right to protest as any other athlete in any other sport. I highly doubt that any hockey owners will actually be human enough to believe their players should express any discontent with the state of society today. I don’t even think they’ll understand what the NFL owners seem to understand about keeping fans on your side so that the whole ad-revenue-based model keeps working (we’ve seen time and time again they don’t give a shit about keeping fans on their side).

And that’s just another reason why the players, and especially the American players, should kneel. Show that you’re aware that racism seeps in everywhere, prove that you’re not the simple country boys they pretend you are, make us know you’re not the over-privileged MAGA assholes that pop up periodically in this league. Hockey can’t hide from its mistakes or from the world we live in today and no one should pretend that it can—take a knee.