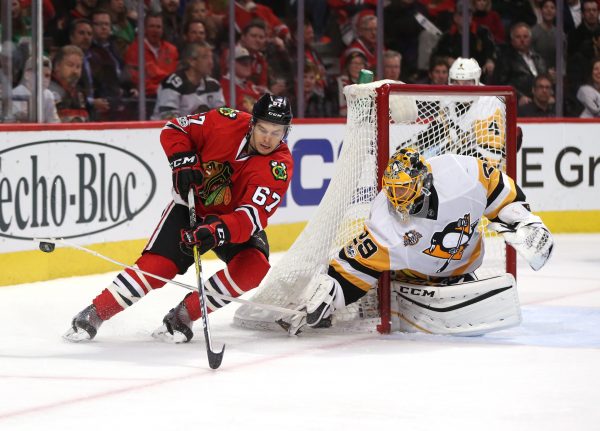 I miss Marcus Kruger already, don’t you? There was a level of trust there after years of reliability that I just don’t have yet with the newer centers. But what’s done is done, and with the merry-go-round of forwards the law of averages would say that there has to be a suitable replacement among them, right? Well, there just might be one in our very own Working Class Kero.

A Look Back: Tanner Kero is only 25, but he seems like he’s got more mileage on him than that. Last year he and his wife and their newborn baby lived out of a hotel for a while after he got called up from Rockford, while his time between there and Madison St. was still uncertain. I can’t think of many other things that sound more like a pay-your-dues type of story of a guy working his way up (although I’m sure it wasn’t exactly some flea-ridden motel). Also just being that young already with a wife and kid? Sounds positively Springsteen-ian.

Beyond the challenging living situation, Kero generally took advantage of his opportunities with the Hawks last year. He started the year with the Ice Hogs and then got called up in December when Anisimov got hurt. Kruger got injured shortly thereafter so Kero moved to fill his spot (hence how we got here today). His CF% and faceoff percentage were pretty pedestrian (47.0 and 44.4, respectively). But he was also a +15 and took a majority of his starts in the defensive zone, which is the right experience to have at this point. He was used to try and stabilize the PK last year (which we still really need), and in those 47 games he had 51 blocks. For comparison, Kruger had 62 in 70 games.

But as I said earlier, I don’t exactly trust that Kero will suddenly become Kruger 2.0. About that PK he was supposed to help with—Kruger’s faceoff percentage short-handed wasn’t stellar (30.9%), but Kero’s was worse (25.8%). But then in the shit show that was the Preds series, Kero’s faceoff percentage jumped up to 59.0%. In general his offensive production has been pretty stable: 20 points in 28 games with the Hogs last year, 39 points in 60 games with them in 2015-16, 46 points in 41 games at Michigan Tech (huh?) the year before that. So what to make of this jumble of numbers?

A Look Ahead: I would say that we shouldn’t make too much of any of this yet. Kero already proved he has quality chemistry with Hartman and Hinostroza in their time together last year, and he has the skills we need in Kruger’s absence, even if they’re not there in the same abundance. He should be the 4C—this is based both on his performance last season and the way this preseason is shaping up. It would make the most sense to put him on a line with Hinostroza and then pick another dude to round it out. (The Hawks really seem to have something for John Hayden—I’m not sure if he really deserves that spot but the organ-I-zation seems to be doing everything it can to convince themselves that he does.)

So the remainder of the preseason will be telling, especially if Laurent Dauphin gives Kero real competition for the 4C spot. Personally, I’d rather see it be Kero because of his passing and basic offensive competency. I called him a poor man’s Anisimov recently, but really he is a poor man’s Kruger based on everything I just talked about. And that’s what we need—not a goon, not even necessarily an “energy” line in the traditional sense of the word. We need someone who can win defensive zone faceoffs, who can block shots on the PK, and who can contribute a little something offensively while eating up minutes. Kero has shown he can do all those things, and if he can do them a little more regularly, he can safely buy a place for that family of his close to the United Center—or at least rent one that doesn’t have a nightly rate.

Tags: A Working Class Kero is Something to Be John Hayden Marcus Kruger Tanner Kero