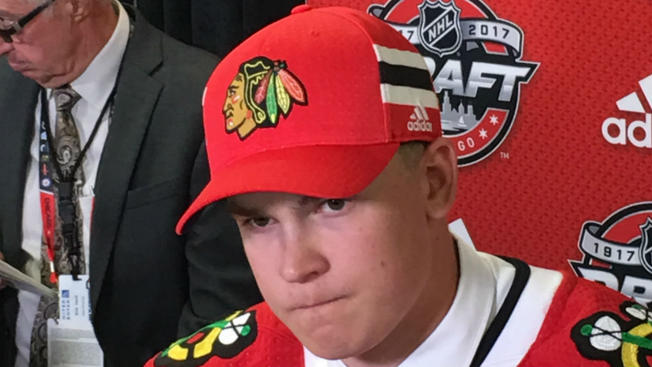 It has been a while since the Blackhwks last had a blue line prospect the caliber of Henri Jokiharju. He fell to the number 29 pick in the 2017 draft where StanBo quickly gobbled him up. He was instantly the best prospect in the organization, but really that’s just how things go when you hadn’t picked in the first round in the two drafts prior. Now, the Blackhawks hope he’s ready to make the leap from the WHL to the NHL at age 19, just one year after being drafted.

A Brief History: For those that don’t know, the WHL is the one of the three major junior hockey leagues that comprise the Canadian Hockey League. It’s essentially a semi-pro hockey league for teenagers who show a lot of promise at a young age, but typically it’s full of good ol’ boys from Canada and the odd American who spurns the idea of college. Jokiharju, of Finland, took a bit of an unconventional path for a Finnish player and decided not to honor a contract he signed to play in Finland’s top division prior to 2016-17 to head to Portland and the WHL, the CHL division considered to be the closest to NHL style, with tighter checking and lower scoring games than you’ll find in the other OHL leagues.

That’s a whole lot of background for me to give you just to say that Jokiharju scoring 71 points in 63 games from the blue line last year in the WHL might not sound all that impressive, but really it should probably make your pants tighter (or damper, for the ladies in the audience). I don’t really have the patience or time to dig through WHL stats history and draft position for blue-liners, but I am willing to guess that it’s not often that defensemen who put up that kind of production make it to the 29 pick in the draft. If he had done that in his draft year, he might’ve been top-10 pick. But, in Joker’s case (come on, that nickname was obvious) he had a bit of an adjustment after coming to North America and had a slightly less production 2016-17 with 48 points in 71 games for Portland (3 points in 11 playoff games as well) and with that he was there at 29. We call that one good fortune for the Hawks.

It Was The Best of Times: So what is the best case scenario for Jokiharju in 2018-19? In training camp, he shows that he is one of the three of four best blue liners the Blackhawks have available to choose from to fill their roster. He makes the squad and gets bumslaying minutes, maybe with Seabrook (though Nacho would have to play his offside, and we might not want that) or Forsling. He’ll probably struggle to pick up the defensive side of things, as nearly every young defenseman does, particularly the offensive-minded ones, but he shows the right instincts and grows as the game goes on. He holds his own in the shot attempts department with a 52 or better CF% and uses some PP time to pad his score sheet and ends up with 30 points in the NHL this year, more if he’s the real deal. Outside of lighting the world on fire or me bring unrealistically optimistic with this ideal scenario, I’d say that’s a damn good season for Joker.

It Was The BLURST of Times: There are two possible worst outcomes here. One, the Blackhawks keep Joker on the roster to open the season, and decide after ten games that they want to keep him around, meaning they don’t send him back to the W and burn a year of his entry level deal, but then a few months later decide he sucks and isn’t ready and then send him back. Burning a year of the ELC for no reason would be terrible asset management and worst talent evaluation, because if you can’t tell if he’s NHL ready or not after a training camp and nine NHL games, you need new evaluators. The other worst case scenario is that he stinks to high hell this year, regardless of where he plays. Maybe its the NHL and he is just a turnstyle in the defensive end who never finds his feet or hands on offense. Maybe he goes back to the W and forgets how to hockey. I don’t the latter scenario there is particularly likely, but if you wanna get dark, before talking injuries, starting to suck in the W would be troublesome.

Prediction: I think Joker has a real shot at making the Blackhawks out of training camp, in part because there are just so many question marks on the blue line right now. Is Gustav Forsling good? Is Erik Gustafsson good? Is Jan Rutta good? Is Brent Seabrook alive? All of these are up for debate. That leaves a big enough opening for Joker to make the team with a strong camp. If he can do that, all signs from his history point to him blooming where he’s planted, if you will. He took to the North American game very easily in his first WHL season, and then dominated that league the next year. I don’t think he’s like to do that in the NHL, but there’s no reason he can’t produce something like 15-20 points, and perhaps more like I said in the best case. If he’s not in the NHL, the Hawks have some options in terms of what they can do with him, but the best decision would probably be to send him back to Portland for a year. They might be able to exploit some loan loopholes and get him the AHL, but is that really the best place for him to develop? I am not convinced. Either way, Joker is at least one interesting player to keep an eye on, and might just be worth getting excited about.