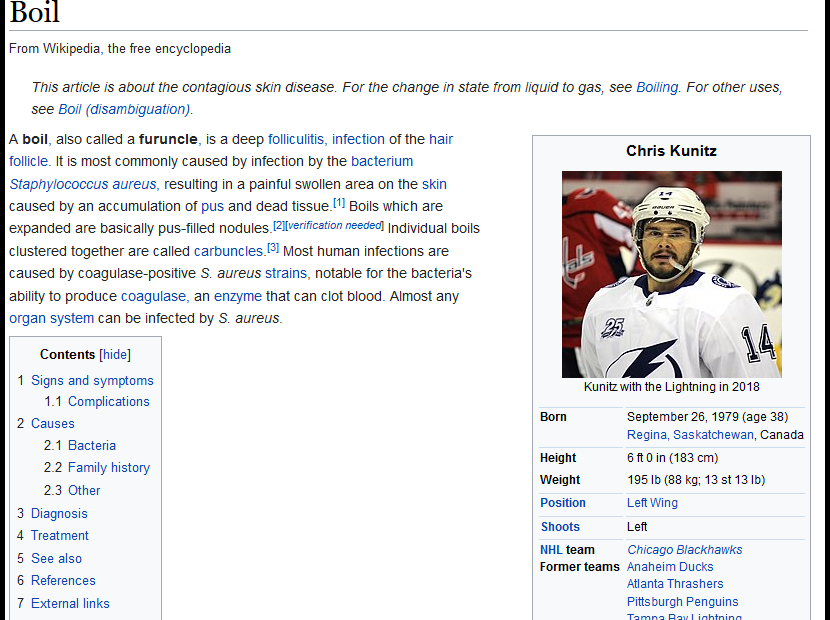 If you believe that time is a flat circle, then there are two signings that make perfect sense. One is Brandon Manning, whose performance Q recently described in an after-camp interview as pleasing in the same breath as saying that Jokiharju will need to work on his decision-making if he wants to make the team. The other is Chris Kunitz. He came into the league when the Hawks were really bad and, barring a lot of ifs becoming yeses, will likely go out of the league when the Hawks are really bad.

A Brief History: Kunitz has been playing professional hockey since 2004. And believe it or not, he’s played mostly good hockey by the numbers over 14 years. Kunitz is a rare combination of GRITHEARTFAAAAAAAAART and actual talent, and unlike many other plugs teams sign simply because DEY WERE ON DA TEAM DAT WON DA CUP SO DEY KNOW HOWDA WIN, Kunitz usually contributed to his team’s success in ways that didn’t get the blood pumping to Mike Milbury’s gnarled shillelagh. Over all four Cup runs, he posted a healthy 51.5 CF% and contributed 29 points (five goals, 24 assists). His career 55 CF% is nice, and reflects both the talent he’s played with (Crosby, Malkin et al.) and the 55.4 oZS% he’s accrued over his career.

So what the silly shit is he doing in Chicago?

Last year saw Kunitz in a full-fledged fourth-line grinder role. For only the third time in his career, he started more often in the defensive zone than the offensive zone. Despite spending just 46.8% of his time on the offensive side of the ice, Kunitz still posted a 50.2 CF% with the infinitely talented Ning. He also scored 29 points, which would have made him #8 in the Hawks’s scoring totals last year, just two points off Artem Anisimov.

Given his contract this year (one year, $1 million) and usage last year, Kunitz would have been a no-doubt improvement for the Hawks on the fourth line. He’s a bit long in the tooth, but he can still be a gigantic boil on his opponents’ asses in terms of agitation and offensive production.

The problem, of course, is that Joel Quenneville has no intention (and perhaps no option) to use him as he should be used. Early in camp, he’s on the top line with Jonathan Toews. With all the what-have-you about how Toews needs to up his scoring if the Hawks want to stand a chance, it’s hard to understand how having Kunitz on his left side helps him do that. Kunitz is slower and less handsy than he was in his heyday. Maybe, if you really, REALLY squint, you can justify having him on the right side next to Alex DeBrincat and Toews, but if it’s come to that, then this year is already a burning clown car with a stuck horn.

And of course, in the organ-I-zation’s constant attempt to tie their own hands behind their backs while pissing into a headwind, Kunitz has a No Movement Clause. So, if he manages to have a decent year and turns into trade bait, he will have all the leverage in picking which team the Hawks can even potentially trade him to. That’s fine from a high-level players’ rights lens, but I don’t see any reason why the Hawks had to give him an NMC in the first place, and I’ve given up on trying to figure it out.

It Was the Best of Times: There might still be some gas in Kunitz’s tank. In a best-case scenario, he hunkers down the fourth line with Marcus Kruger and I guess John Hayden, and they serve as a strong shutdown line with a bit of scoring flair in Kunitz and Hayden. In small doses, Kunitz plays on the right side of the first line with Toews and DeBrincat, playing the role of Annette Frontpresence and taking the Wide Dick route of having Toews and DeBrincat fire shots at him instead of the net. He scores 15–20 points by the trade deadline and agrees to a trade to Toronto for a second- or third-round pick in 2019.

It Was the BLURST of Times: Kunitz spends most of his time on Toews’s left side, which is where DeBrincat should be if Q is dead-set against throwing Top Cat–Schmaltz by the Bowlful–Garbage Dick out there regularly (and of course he is). This means that either DeBrincat has to play on the right side (recall that even though Top Cat is righthanded, he’s goofy-footed in that he’s more comfortable on the left wing) or, god forbid, on the third line again. When approached by upper management about a trade, Kunitz declines.

Prediction: With this team looking more and more like the West Lake Landfill—which, I shit you not, is a smoldering landfill fire approaching a radioactive waste dump outside of St. Louis, a more apt metaphor for that dogshit city I cannot think of—I suspect Kunitz will play more time than anyone wants on the top line. But with Dominik Kahun promising to fuck off back to Germany if he’s not on the team this year, maybe Q does DeBrincat–Toews–Kahun (which is a problem itself) and lets Kunitz troll around the bottom six, which is where he belongs at this point in his career.

The nice thing about Kunitz is that he’s fine. He’ll be OK if in the bottom six, frustrating on the top line. Much like how this season looks to bode, his presence is an overall shoulder shrug, a constant reminder that nothing gold can stay.