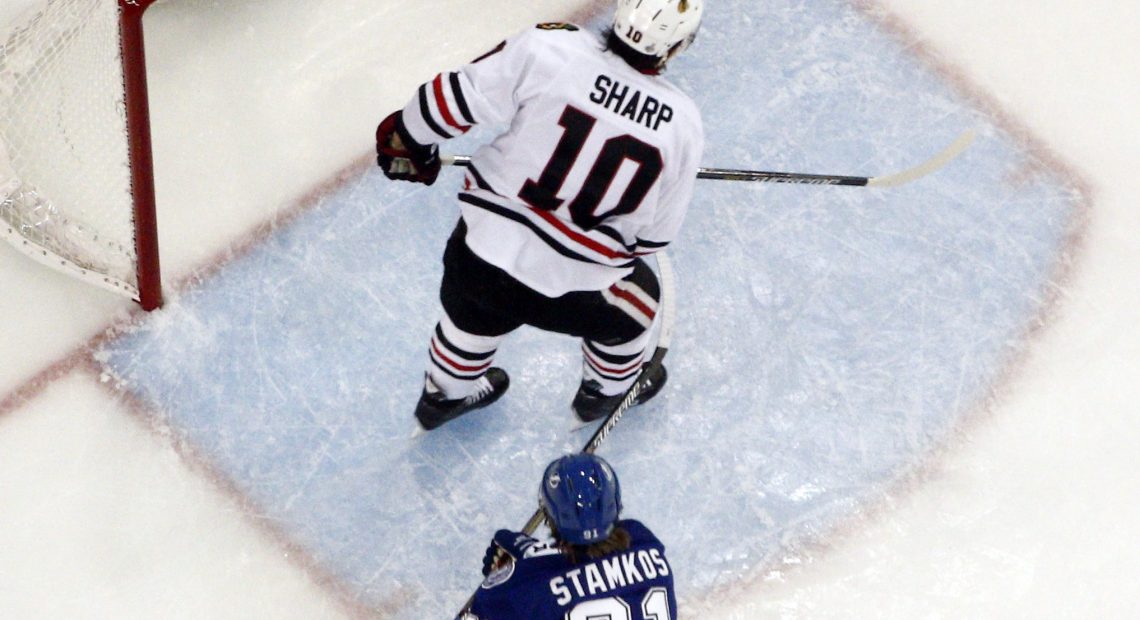 Here we are again. But then again so were the Lightning in 2004 so that must mean something, right?!?!? A lot has been made during this series about the types of starts both teams have made. The Lightning have been credited with fast starts and the Hawks with starting slow.

Yet the series was tied 2-2 going into tonight so it probably didn’t really mean a whole bunch. In Game 5, it was the Hawks that started fast and the Lightning that started to pick up their game the longer it went on. Corey Crawford, though, was the difference. Funny how that works.

Both teams were the beneficiary of puck luck in the first two periods as Patrick Sharp deposited a puck into an empty net after Ben Bishop and Victor Hedman ran into each other’s orbits and Valteri Fippula smacked a deflected one-timer that Duncan Keith very nearly broke up.

In the third, it was Kris Versteeg, naturally, that sparked the game-winner. His breakaway/whiffed shot/shot on net kicked out a big enough rebound for Antoine Vermette to bang home and here we are again. One win away.

Let’s get down to it.

–This was the best game the Hawks have had limiting the Lightning forecheck. This happened for two reasons. One, their defensive zone passing was excellent. When the Hawks went defensive partner to defensive partner, the passes weren’t behind or in a teammate’s skate. It was either tape to tape or tape to skate and tape. This made a huge difference in making easy zone exits and also led to the second reason.

The Hawks had more confidence to reverse the puck on a breakout. I counted one sequence in the second period where the Hawks went partner to partner behind their own net three times and not one time did a Lightning forechecker come close to breaking up the play, which is bananas.

As a whole, the Lightning had to chase the puck in the offensive zone way than they have been. By the time they were getting to the Hawks defensemen, the puck was already up and out of the zone.

It all starts with efficient passing and tonight, the Hawks were on point.

–Oh, if only Corey Crawford would win the Conn Smythe. What a glorious redemption tour that would be. If Duncan Keith weren’t having a historic postseason and Victor Hedman having a national breakout, Crawford, in a just world, would also have his name out there.

Antoine Vermette gave the Hawks a 2-1 lead with 18 minutes left in the third. From that point on, the Lightning threw everything they had at him and Crawford was equal to the task. The whole period was stressful enough but Crawford certainly helped the cause by containing every loose puck and not giving Tampa any more opportunities than they needed. Stamkos shanking a one-timer shortly after the Vermette goal did make things a bit easier but it’s not like Tampa didn’t have any chances after that.

Not that it’s a huge thing, but it was borderline criminal that Crawford wasn’t named one of the stars of the game in Game 4.

–Kris Versteeg, one of the best Hawks during a crucial Stanley Cup Final game. Just like we all expected. Versteeg’s play set up the game winner as I mentioned, but he was also in and around a ton of opportunities for the Hawks. If this were a game in February, he very well could have ended up with a couple goals and a couple assists. His one-timer in the second period that Bishop got with his toe comes to mind quickly.

He also had a bit more jump in his step. Though playing in a bottom 6 role allows him to really bum-slay, which is where he’s always found his niche.

–It’s always great to see Jason Garrison on the ice in an empty net, must score situation for your team. And by great, I mean taking a butter knife and trying to slice off your pinky finger.

–The Kruger line was outstanding, once again. While Brandon Saad’s price tag is getting all the headlines, Andrew Desjardins is certainly earning himself a nice paycheck on July 1. Not bad for a guy who’s deadline deal was basically an afterthought.

–I wouldn’t be stunned to see a game 6 similar to the one versus Vancouver in 2009 where the final score was 7-5. Kane, Toews and Stamkos have all been silent so far and it’s very hard to believe that all three will not be heard from before this is over.

Kane, again, had the puck quite a bit. Yes NBC, there were times that Hedman did knock it off his stick and that is going to happen. Stamkos and Toews, however, were both in the black for their Corsi. But that probably had more to do with both teams worrying about defense first than anything else. Toews joined Timonen and TVR as the only Hawks without a shot on goal. Could you imagine the knee-jerk reaction if the Hawks dropped this one? No thanks.

–Ben Bishop didn’t make goaltending look nearly as painful tonight, which has to be encouraging for the Lightning. When the Hawks were swarming in the first period, Bishop looked as good as he has all series. He was making confident saves, cutting down angles and not looking like a guy who threw on goalie pads for the first time that morning. If he looked like he had in game 3, this one could have gotten out of hand real fast.

He still acts a bit too much like a Mike Smith clone for my taste. His Al Czervik impression after Victor Hedman ran into him on Patrick Sharp’s goal only added to his legend.

–Who else thought that puck was going to jump over Patrick Sharp’s stick before he popped it in the empty net?

–The Lightning have made their bones in this playoffs by winning on the road. Destiny is not a given here. Do not let this opportunity slip past.