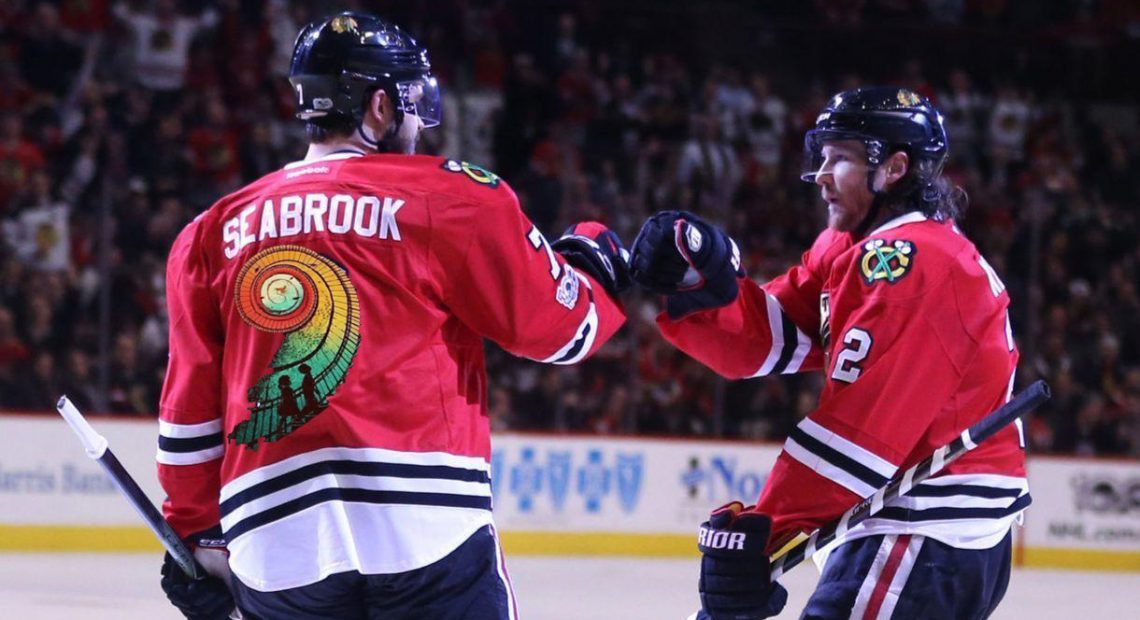 By now, if you’re any kind of Hawks observer, you know the big news out of Saturday night had nothing to do with the Hawks’ win in OT over the Wild, which most likely will still be consigned to obscure trivia in a season to nowhere. It was Elliotte Friedman reporting on Hockey Night In Canada that the Hawks had asked Brent Seabrook to waive his no-trade clause, and that Seabrook had declined to do so.

There’s a lot to take out of this, perhaps more than it would be with most players, but I want to start with this: Considering how intelligence-agency tight-lipped the Hawks at least want to be, I don’t think this gets out there unless the Hawks want it to. Friedman might be the best reporter in the sport, and he would have ways around whatever firewalls and roadblocks the Hawks set up, but my spidey-sense tells me that’s not the case (admittedly, I have an overactive spidey-sense. The cost of the medication is overwhelming).

And to do so is certainly meant to poison the water around Seabrook. It’s easy to get mad at Seabrook, and I and everyone else at this blog have been guilty of it at times. His play has dropped off a cliff and then off another cliff, and quite simply it’s not all due to the ravages of time and mileage. We were commenting as early as 2013 that Seabrook looked sluggish and out of shape, and other than his brilliant renaissance in the spring of ’15, that’s been the case. Those preseason stories about “best shape of his life” were clearly meant to counter something. Still, the main complaint about Seabrook isn’t Seabrook himself, it’s his usage, which doesn’t fall on him. And this is probably meant to distract from that.

But let’s be clear. The NMC Seabrook has was earned by being a goddamn stalwart on three Cup teams (even if he was a main culprit for the lack of a fourth in ’14) as well as a organizational foundation. If Seabrook has decided he doesn’t want to either uproot his family from where they’ve been based or spend months away from them as they stay here in Chicago, that’s absolutely his right. The problem for Seabrook is this only ends one way.

While the leaking of his refusal to waive might turn more fans against him, it’s unlikely that Seabrook would ever get booed out of the building or something. This isn’t Canada. The memories are still fresh enough, and I can’t really recall Hawks fans of recent vintage ever singling out a player for ire. The team as a whole at times, sure. But never an individual. Feel free to correct me if I’m wrong on Twitter (@FelsGate). He’ll certainly face more scrutiny and questions from the press, but again, this isn’t Montreal and it’ll fade. And it won’t be all that heavy to begin with, even if the local press really has no love for Seabrook (and they don’t). This is another advantage of the Hawks quickly fading into the sporting background if they’re not good, and remember pitchers and catchers report in eight days and both teams in town are at least interesting.

But it will color things to whatever degree, because look at the difference in tone between this report and the one about Duncan Keith. The one about Keith from Pierre LeBrun was full of reverence. They will go to him. They will let him decide. They have no deals or talks in place, but they’ll ask what he wants, and so on. Seabrook it was just simple and landed with a thud. We asked, he refused. A lot less reverence there, it seems.

If the Hawks are getting this out there on purpose, and that’s just a strong hunch but a hunch nonetheless, what they’re telling you is they see the same thing you and I do. Seabrook is no longer a top-six player on a team that hopes to do anything noticeable. And with the arrival of Adam Boqvist next year, the return of Henri Jokiharju either then or later this season, and the hopeful arrival of Ian Mitchell (less likely), the Hawks are facing a numbers-crunch. Throw in the arguable fascination with Erik Gustafsson, and it’s worse. And the Hawks are making it known they kind of don’t want Seabrook around to make the matter harder anymore. The tone at least suggests they’re happy to have Keith around if he wants to stay, but they won’t stand in his way.

Or, it could be the Hawks went around to see if anyone would even consider taking Seabrook off their hands, all they heard was laughter, laughter, and are using this as cover for that. Could be, but either way they’re recognizing that Seabrook isn’t in their long-term plans.

We’ve been over what needs to happen before. But it may be getting more urgent and less cordial now that this is in the bloodstream. Once the Hawks reach the conclusion that Seabrook can’t be in their plans, and it seems they’re there, then they’re going to find a way to get him off the roster. What’s clear now is that Seabrook isn’t going to see the end of this contract, at least not here.

We mentioned telling him what the plans will be for him going forward as a seventh d-man. That’s clearly where the Hawks are, and maybe beyond that. As unsightly as it is, both sides seem to be spiraling themselves to a buyout. Now, a buyout is particularly ugly, because of the way Seabrook’s base salary and signing bonus fluctuate. But basically, the Hawks would be paying Seabrook something for another 10 years on a buyout, and they’d have a significant cap-hit with a buyout until ’23-’24. The cap hits for a buyout until then would be, and deep breath here people, $3.7m-$6.7M-$3.7M-$6.7M-$5.2M. Not pretty.

But the thing is, you’re already committed to that. That’s his cap hit now, so you’re paying it either way. It’s sunk cost. Over the next couple of years you’ll be introducing cheap, and what you hope is game-changing, talent to the blue line in Boqvist, Mitchell, and Beaudin, along with Jokiharju. At this moment, it sure looks like none of them will get any real money until at least 2022, and that’s probably only if Boqvist goes the fuck off. So you could argue it balances out?

And maybe that’s what Seabrook is holding out for, and again, that’s his right. He probably already senses this is all coming to an end here, as sad as that may be. But a buyout lets him choose his options essentially, whether that’s going somewhere else (with or without the fam) or simply retiring. He gets to choose, though his NMC would give him some say, just not total.

Just project this out. Next year, at minimum, with no additions, the Hawks blue line is some combination of HarJu, Boqvist, Murphy, Gustaffsson, and in their dreams Mitchell. Dahlstrom has slipped of late, but has also been better than Seabrook. It’s still likely Keith is here. There’s six, and that’s without any trades or signings this team desperately needs to make instead of signing Panarin in a reunion tour. The Hawks seem to have concluded there’s no room for Seabrook. It won’t be long before Seabrook sees that too.