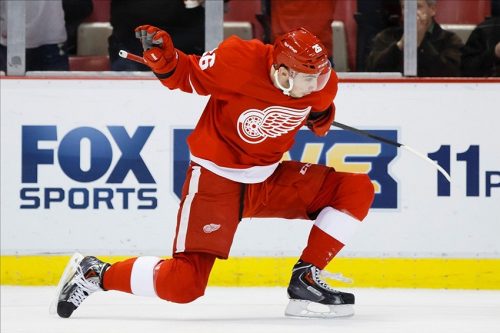 The Blackhawks have made a move, trading a third round pick in this year’s draft for Tomas Jurco, late of the Detroit Red Wings/Grand Rapids Griffins.

Jurco is 24, 6’1 and just shy of 200lbs, and possesses a ton of speed and skill, befitting of a high second round draft pick back in 2011. But he’s been hurt and when he hasn’t been, he hasn’t really put it all together. He’s only played 16 games this season after back surgery in the off-season, and has yet to score playing 10 minutes a night when he plays.

Jurco got a lot of buzz from some feature videos he did in Grand Rapids which showcased his plus hands. There was even a real trippy one with a whole Tron thing working. Jurco was one of many prospects that they told everyone in the world they were letting overcook in the AHL before they brought them up to the big club, and everyone simply bought it because Ken Holland got enormously lucky with late-round picks many years ago. And yet we’ve never really seen any of them do much. Teemu Pulkinen is now lost in the Minnesota system. Tatar and Nyquist have carved out good NHL careers but don’t really amount to much more than second-line players. Don’t even ask about anything on the blue line. So it’s hard to suss out what Jurco really is from what he was sold as and then never provided.

Jurco has skills, but they’ve never manifested at any professional level. He wasn’t even a dynamic scorer in the AHL, and really even his point-per-game rate in the Q is nothing more than standard for anyone in that league that maintains a pulse and has three of four extremities.

To be fair to him, Jurco really only has one full season in the league, and even then he missed 18 games through injury. He missed half of last year with ailments as well, so he hasn’t really gotten an extended run in a while. The Hawks have had success with this kind of thing before, the latest being Richard Panik, but you wonder how many times you can go to this well before it goes dry.

The thing is with Schmaltz starting to really sow his wild oats, the Hawks need for another top six winger has basically vanished. Even if Hossa ends up swapping spots with Wiener Anxiety, a third line of Hartman-Kruger-Panik is going to be fine. It’s hard to see where Jurco can provide anything more than Hinostroza does at this point other than size. He’s kind of the opposite of Vinnie, as Vinnie doesn’t seem to have anything other than speed and finish, and Jurco has everything in between negated by not having the latter.

The encouraging thing, if you need it, is when Jurco first came up and was healthy he was a dominant possession player, breaking 55%. Once the injuries hit and the Wings went into the toilet though, he’s followed suit hardcore and is rocking a 44.9% line in 16 games this year.

It’s worth a shot. Jurco didn’t cost anything, and if he doesn’t work out he gets punted into the ether after the season as he’s RFA. He’s a high-second round pick so there might be something there to be mined. The Hawks might realize there isn’t much out there to add at the wing position, so take a flier or two and if it doesn’t work you’ve got enough to be happy with at the moment.