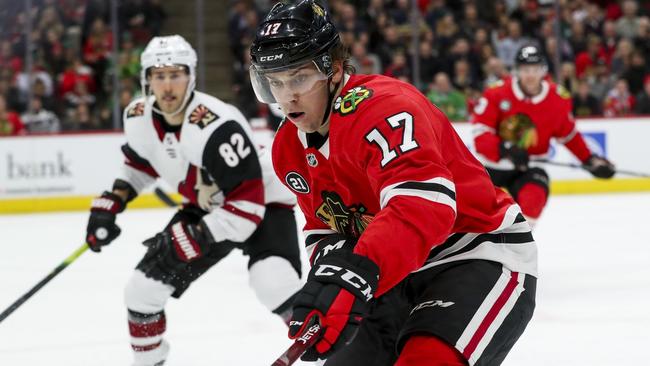 As a pretty damn good fantasy sports player (mostly self-proclaime, admittedly) I love a good “Buy Low, Sell High” move. If you’re a beliver in regression, and you should be, nothing can make you look quite as smart as offloading a player who is performing above what you expected and cashing in, especially if you can take advantage of someone looking to offload a player that is underwhelming compare to expectations. It appears Stan Bowman thinks the same way, because there is no better example of a successful Buy Low trade that ended up being a major home run than when Stan acquired Dylan Strome as the headliner return for Nick Schmaltz. Let’s get right to it:

It Comes With A Free Frogurt

Despite being hailed as some kind of analytics hero, John Chayka gave up on Strome after a relatively small sample size of NHL experience. A huge part of it may have been that the Coyotes had lofty expectations for Strome after taking him third overall in the same draft as Connor McDavid, but Strome had appeared in just 48 NHL games over portions of three seasons (including this one) in the desert. The production was limited, but it’s not like he was playing with much impressive talent out there either. The Hawks ultimately decided that Schmaltz’ contract demands were just too damn high and that his ceiling of being a 2C might not even be long term, so they gambled on Strome and what is hopefully still a 1C ceiling, though an increasingly unlikely one he will hit.

Strome stepped into a much better situation in Chicago, being able to to slot with Alex DeBrincat, his longtime linemate from their time at OHL Erie, and Patrick Kane. And when the pressure was off his shoulders, Strome thrived. As you can see above, he had 51 points in 58 games, which is damn close to a point per game pace and projects out to a 72 point season if he played all 82. He also contributed well on the PP, with 3 goals and 9 assists coming on the extra man unit. I don’t think anyone ever doubted the vision and skill of Strome, and it’s not like it would be exactly a shock if he busted big time when you look at what his brother did, but the technical ability he had really came to the forefront when he arrived here.

That all being said, there are still a few things to be a little concerned about with Strome that could lead to a potential production. falloff. Let’s start with those boldened CF% and xGF% numbers above, which are certainly somewhat alarming. The Hawks weren’t a great team in either category, but Strome still had a -3.2 CF%Rel and and a -3.26 xGF%Rel. I am sure that a huge part of that could be attributed to the defense, because we know the blue line was awful, but the center still bears some responsibility for that. To be that far below team rate is troubling.

I think something that could be playing a big role in that is the well documented skating issues that have followed him (and his entire family, really) throughout much of his career. He’s strong in his lower half, and had good enough size to stand his ground, but he isn’t fast by any stretch of the imagination, and that certainly plays against him in today’s NHL. It also makes him something of a misfit in Coach Cool Youth Pastor’s speed-obsessed man-t0-man system. I tend to believe that his skill will play way above this concern, but if there is one thing that is likely to drag him down and keep him from reaching his potential, it’s that.

Moving forward, Strome gives the Hawks a good amount of comfort in terms of the center depth. Even if he falls off slightly next year, he still could be a 60 point guy, which is perfect for a 2C, and if he steps up the production you could be seeing a full point per game pace and some 1C numbers. Either way, it looks like the Hawks won big with Strome.