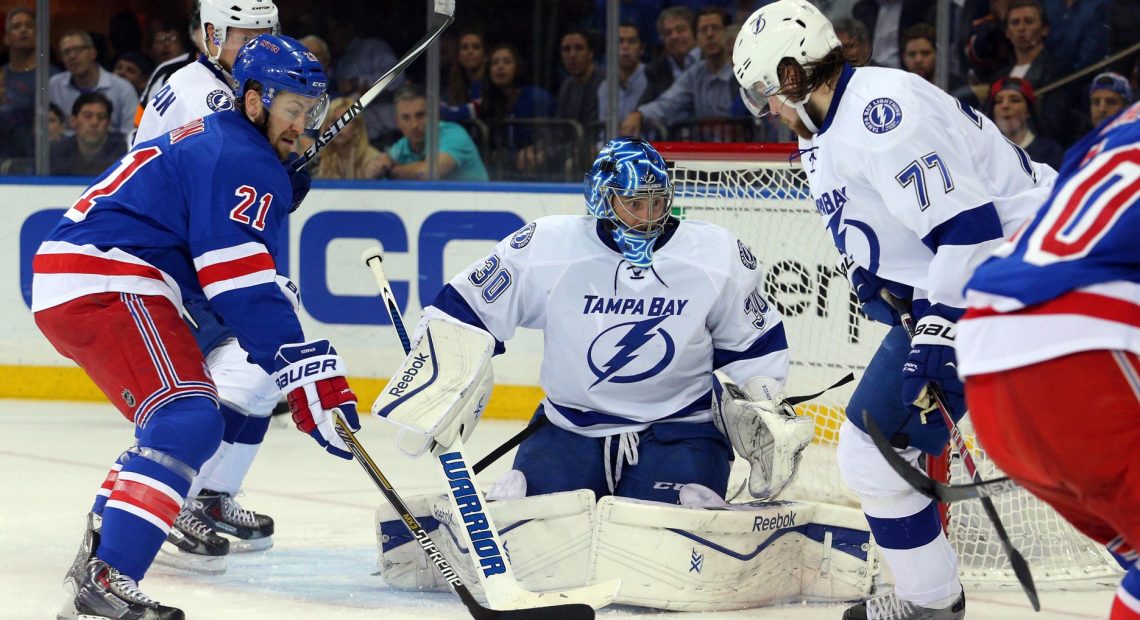 Though Ben Bishop was a Vezina Trophy finalist last season with an exceptional .924 save percentage, 5 shutouts, and a 2.23 goals against behind a surprise Tampa team that missed Steven Stamkos most of the year, he didn’t play at all in the Bolts’ four-game exit at the hands of the Habs last spring, making this year his first trip into the post-season. To this point he sports a wholly respectable .920 save percentage over the Lightning’s 20 postseason games, facing 26.25 shots per game (525 total). For a team whose aim is to be on the correct side of the possession ledger, these are certainly Cup Final caliber numbers, but unfortunately for the Lightning, they’re below water in shot attempts, both raw and score adjusted, and if that trend continues THE BISHOP will have to elevate his game further (GET IT).

Quite a fuss was made over Bishop’s back to back shutouts in Games 5 & 7 in MSG, and his home and road splits certainly tell an odd tale for a playoff campaign, with a grotesque .888 save percentage at home, allowing 27 goals in 10 games (24 shots a game), to a .945 on the road seeing 28 shots per, allowing only 15 goals on 280 tries. And even aided by the aforementioned shutouts against the Rangers, Bishop still only walked away with a .902 for the series, allowing 19 goals on 193 shots in seven games. So basically he’s been just about as uneven as the guy across from him, but will undoubtedly receive far less scrutiny.

What will get hammered home on the broadcasts, however, is that Ben Bishop is tall. He’s the tallest goalie in NHL history in fact, standing at 6’7″, 210 lbs. For a big man, Bishop is quite nimble and an exceptional puck handler, with 7 assists in both the regular season and playoffs. He’s quick laterally when standing upright, but because his shoulders are as high as the crossbar even when on the ice, Bishop’s priority is to take away anything low first and foremost. His rangey legs can span post to post across the entire 6-foot wide goalmouth while still sealing off his five hole, and he’ll take away those chances first.  For the Hawks to have success, they’ll need to wait out those opportunities when he’s down to zip shots up high past his ears, making an extra lateral pass if time and space is afforded, because his glove hand is not in the same stratosphere as Pekka Rinne’s. And when Bishop is upright, there are more holes between the arms and body as well as the 5-hole than there are with a normal sized goalie, so any time he can be kept standing and scrambling the Hawks are at an advantage. Attempting to screen him in close is a futile and stupid idea, particularly coming from the generously listed 5’11” Andrew Shaw. Any screens and tips are going to have to come from slightly further out than the crease in attempt to get the puck through Bishop before he’s down, or to deflect the puck upward on low shots if he is.

Tampa’s top defensive pairing might be one of the more unheralded units in all of the league, led by former #2 overall pick, the massive Victor Hedman. Hedman is 6’6″, 229″ lbs, but that size belies just how fast he is, particularly moving forward. His long easy stride and tremendous reach create an optical illusion where it appears he’s not moving nearly as fast as he is, and in a blink he’s driving below the dots and dropping his shoulder and moving towards the net. He has fantastic vision from the point both in shooting and passing, and uses his reach to knife pucks away at the blueline as opposing forwards attack. There are nearly no flaws in his game, but one of the biggest knocks on him is that he’s not nearly as physical as his size would indicate. This is not the snarl of Chris Pronger or Zdeno Chara of Finals past. And though Hedman is faster than either of those two by very wide margin (and only being 25 as opposed to those two giants being in their late 30s plays no small part), he is significantly faster when pointed forward than backward relatively speaking, and his turning radius still remains wide when switching between those two gears.

He’s most often complimented by countryman and one of 46 former Rangers on the roster, statistical darling Anton Stralman. Very similarly to another Swede, Jonas Brodin, almost nothing about Stralman’s game jumps off the page, except that his is almost never, ever out of position. He’s not overly big (5’11”, 190lbs) or fast. He has some offensive ability but that mostly comes in the form of making smart passes with what he’s given, and a reasonably hard but very accurate shot.

If the Hawks get into a situation where they are blindly firing pucks up the wall in their own zone to relieve pressure, these two will surely make them pay. Hedman and Stralman generally start a little bit more than half of their shifts in the offensive zone, and for the most part see the highest level of competition. Particularly when at home, in all likelihood these two will see Jonathan Toews, regarless of whether it’s Patrick Kane or Marian Hossa on his right wing. In that case, look for the Hawk zone entries to be funneled even more to Brandon Saad, who will be attacking Stralman’s side.

The extremely large 6’8″ Andrej Sustr anchors the Bolts’ second pair, currently with Matt Carle, though he and Jason Garrison have been known to swap places, and Sustr played with Garrison more than anyone else in the regular season. Sustr’s game is profoundly simple, using his size to cut down angles and close on forwards defensively. He’s he has decent speed for a man his size, but is nowhere in the same league as Hedman in any respect. However, like Hedman, there is not a lot of edge to his game despite being an Ent.

His current partner Matt Carle has been seeing more defensive zone starts than any other Lightning blueliner this postseason, albeit against relatively mediocre competition, and he’s still getting buried to the tune of only a 46.83% share of shot attempts. Carle apparently thought getting his burnt corpse dragged around by Chris Pronger five years ago qualified him enough to talk about how Duncan Keith will eventually break down logging the minutes he does, as if that makes him an expert on the subject. Carle got obliterated in that series (47.8%) at age 24 while skating with a sure fire Hall of Famer against a forward group that arguably isn’t as fast as this current Hawks corps top to bottom while Carle hasn’t gotten any faster in five years.

This is where the precipitous dropoff begins for the Tampa blue line, which could force Jon Cooper into tough decisions regarding splitting up Stralman and Hedman, or possibly upping Hedman’s minutes exponentially.

For the better part of the Eastern Conference final Jon Cooper dressed 7 defensemen and would get all of them involved in the game. It remains to be seen if he’ll choose to do that given how deep the Hawk forward group is, but with the series starting at home, it stands to reason he’ll stick to this configuration.

Braydon Coburn was a deadline pickup for the Bolts, and frankly has been an unmitigated disaster in the playoffs. Along with Carle, he likely still has plenty of scarring from the third degree burns he sustained in the 2010 Cup Final. He’s big, like basically every other Lightning defenseman, but he’s been a complete goatfuck in the Tampa defensive zone while facing relatively easy competition. Jason Garrison faces a far greater degree of difficulty based on who he has skated against, and as mentioned earlier, he will often moonlight with Sustr on the second pairing. But he still has trouble getting out of his own end, which prevents him from using his most discernable skill, and that’s a world-ending slap shot from the point.

Nikita Nesterov is an interesting case, as he’s basically been Russian for 2013 Tory Krug. His zone starts are ridiculously sheltered, starting 81.82% of his shifts in the offensive zone. But he’s made use of them, driving the play to a team best 57.56% during the post season. Based on how things go in the first two games, how liberal Cooper gets with his usage is a factor to watch, particularly if Hedman and Stralman are broken up, giving Nesterov a safety net to work with in a greater variety of situations.