The Children Better Be the Future, Cuz We Ain’t Got No Present – Dylan Cozens 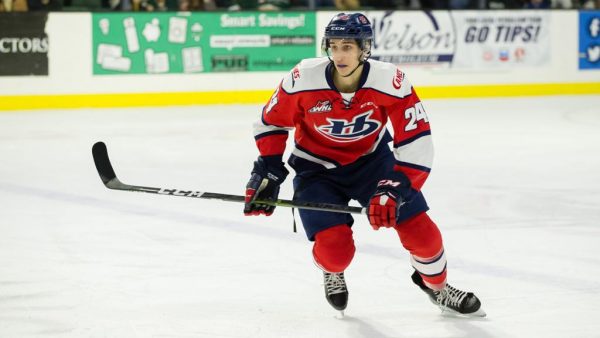 The FFUD #3 Pick Preview rolls on with a guy who has the same name as an injured Phillies prospect, in a coincidence both weird and possibly accurate.

Why the Hawks Should Take Him

Cozens can skate. That’s his number one quality, and on this Hawks team that ability shouldn’t be underestimated. We love Dylan Strome around these parts, but skating is definitely not his strong suit. And Toews won’t be getting any faster either. Cozens is most naturally a center, and if  you squint, you could see him as a 3C, ostensibly on an energy line with Kubalik or Sikura or any of the other bottom-six rabble. He can get control of the puck and move it through the neutral zone, and at 6’3″ he’s big enough to win puck battles down low, and then he can use his speed to get up the ice and make a zone entry. Which shouldn’t be that hard but you know what we’re dealing with here.

By all accounts, Cozens is a solid two-way player with a decent shot, and even though he’s tall he’s not a slobbering oaf (yet at least). His offensive capabilities have been noted since he was 16, when he scored eight points in 12 games, the second-most for a WHL player at that age behind Brayden Point. He finished this season tied for 10th in points, and his total of 84 was a 30-point jump from his previous season. So he’s got offensive potential.

Why the Hawks Shouldn’t Pick Him

Speed is important, don’t get me wrong, but unfortunately Cozens isn’t all that skilled. Yes his numbers are good, but we’re talking about his 16-year-old season? That’s discomforting in its Pierre McGuire-ness. I at least would want his current season to be enough that we don’t have to talk about him basically as a god damn Bantam. And at this point, he’s pretty much a bottom-six guy. Granted, Cozens would be a hell of a lot cheaper than Artem Anisimov, the costliest 4C there ever was, but is it really worth using the third pick on a third-liner? He may be a top-six player one day but that will depend on a lot of improvement.

I guess you could argue that there’s nothing inherently wrong with the Hawks taking another forward, since the depth they have could either 1) end up being filled with shit, or 2) lead to a roulette wheel of forwards and we don’t know who will work well together yet so why not have a whole bunch of them. But if he can’t make it as a center on the depth chart, it’s tough to imagine Cozens on a line with Toews or Strome, since that would leave Top Cat and Garbage Dick to move to their off side (not happening) or Cozens himself would have to move (not proven that could work).

And, with all of that being the case it would be incredibly frustrating to see the third pick come to that, rather than Byram, when we all know damn well it’s the blue line we have to worry about. Seriously, talking about a potential NHL center when there’s a quality defenseman available is annoying in itself, so thanks for that, Hawks.

Dylan Cozens wouldn’t hurt the lineup, but he may not help it much either. He could be packaged as part of a deal, since there is no shortage of young forwards for the Hawks to be dealing, but it’s hard to see that as a worthwhile use of a #3 pick. Unless that deal can magically bring Dougie Hamilton, then fine. Even in a worst-case scenario he won’t really do any harm and could potentially be a decent center. So that’s…something? And maybe we’d have another guy to use the Dave Chappelle Dylan gif for.