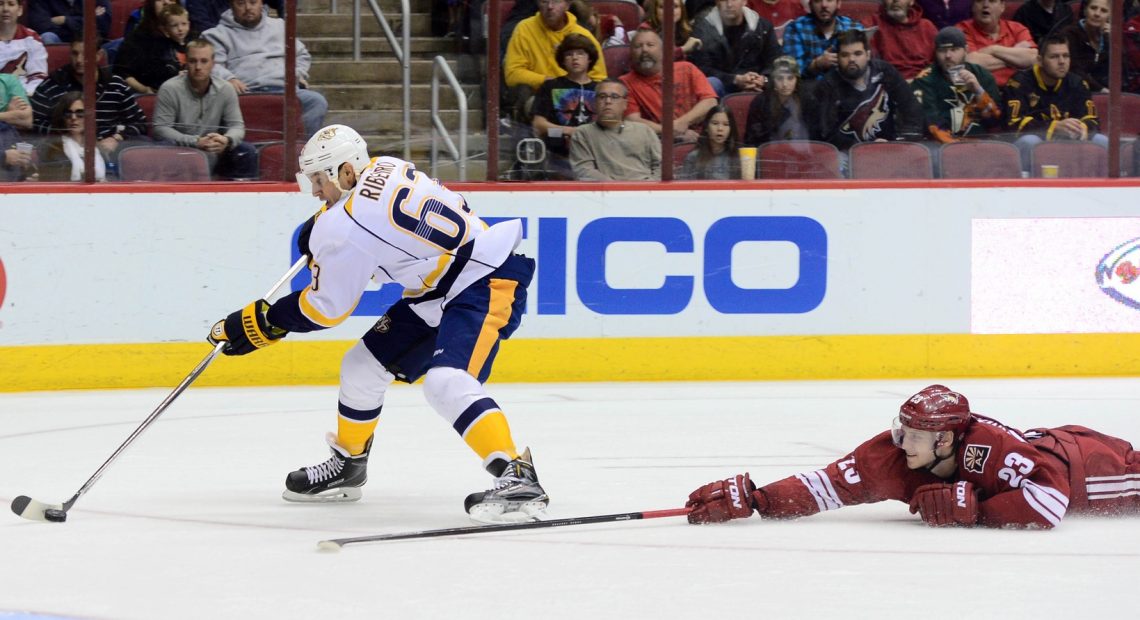 As the center of Nashville’s most consistent and productive line all year long, Mike Ribeiro has been something of a revelation after watching his hockey career flash before his eyes in the face of an unceremonious buyout and harsh words from Arizona GM Don Maloney. Ribeiro has always been a highly skilled pass-first center with exceptional vision, and he’s found a home with the blunt object of James Neal and the electric Filip Forsberg on either side of him now that he’s interested. Mike Ribeiro has always been a colossal sack of crap as well.

This unit has faced the toughest competition the opposition can throw at them all season long, and has absolutely impeccable possession numbers. But the playoffs are another story. Ribeiro has 27 points in 48 career playoff games, and 17 of them came in Dallas’ 18 game run to the Western Conference Finals in 2008 where he was behind Brad Richards in his prime. In Ribeiro’s last foray into the post season with Washington two years ago, he had a goal and an assist in 7 games slotted behind Nicklas Backstrom and got housed in possession. At 35, this will be Mickey Ribs’ first entry into the post season as the top centerman, and he’ll presumably be doing it against a perennial Selke finalist to whom he is giving up 4 inches and 30 lbs shift after shift after shift. Not to mention his winger James Neal, for all his skill, is not exactly a model citizen when it comes to keeping his cool in the playoffs. Forsberg is the real wild card here, as this will be his first trip to the post-season. He has game breaking speed and one of the quickest releases in the league, so it could conceivably not take much from his linemates to get him going even in the face of the Saad-Toews-Hossa matchup.

The name of the game here is balance, as all three of these players sport nearly identical stat lines (at least for the ones being cherry picked for this exercise). While clearly on the offensive decline now well north of 30, Mr. Carrie Underwood has always been defensively responsible, and that’s translated to driving possession at a rate nearly comparable to the Preds’ top line, though they do see slightly inferior competition. Craig Smith and Colin Wilson seemingly kill the Hawks at every juncture, and they’re likely to get plenty of opportunity to do so when at home and Laviolette can get them out against the Kris Versteeg Inerpretive Dance Troupe. If they can carry that level of possession against a returned Patrick Kane, it could spell trouble with a capital “F” for the Hawks. And if Laviolette is able to get these guys out against Rozsival in any capacity, that goes double.

Even as far down as the third line in the depth chart the Preds’ possesion numbers are rather impressive. While a great deal of that is owed to their deep defensive corps, this group isn’t helpless. Yes, even Viktor Stalberg. Matt Cullen has long been a favorite of this publication even in his advancing age, and he still remains a functional depth player with some offensive creativity. It was not so long ago where he provided the only scoring punch an overmatched 2013 Wild team could provide, and he actually made Devin Setoguchi look effective. Jarnkrok hasn’t developed at the rate of Forsberg, but there are still hopes for him to be a contributor. Viktor Stalberg couldn’t find a home under Peter Laviolette and spent most of the year in Milwaukee, that’s how bad things have gotten. But he is productive from a bottom line standpoint even if blindingly one dimensional.

Now this is where things get downright icky for the Preds. Paul Gaustad, whom the Predators gave up a first round pick for (which is better than being a healthy scratch, eh Joel?), is still an ace at the faceoff dot, but that should reinforce how bad he’s been in every other facet of his game that his possession rate is that low despite starting with the puck the majority of the time. Granted, this unit starts out with Kruger-esque defensive zone dungeon zone starts, but they are hardly ever getting out of their own end. Laviolette still gives them all about 12 minutes a night, regardless of which 2 of those 3 wingers are with Gaustad, so it will be something to watch if he shortens his bench drastically. Because once the series shifts to Chicago, Quenneville will be able to get Kane away from Fisher, and even Kris Versteeg couldn’t screw up against these turds.