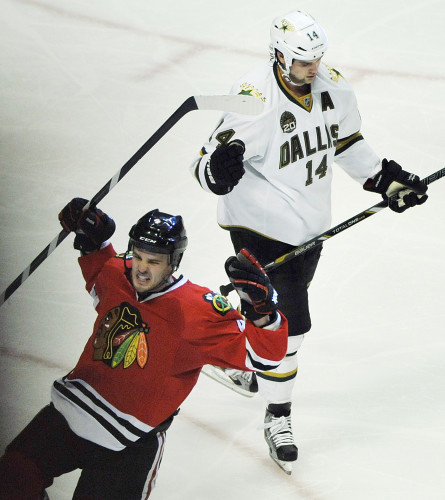 This probably won’t be as detailed of a wrap as it should be, because I spent most of my time at the game trying to convince my father to not yell “Twat!” too loud at the Ice Crew or trying to learn all the various Yiddish phrases he’s somehow applied to hockey. Speaking of which, in case you were curious….

-“Scheiss” (pronounced “Sheeeez) is shoot. Not to be confused with “Scheise”, which means “shit.” That’s what my father taught both me and my brother to yell while getting shots at the doctor’s office to ignore the pain. When we were both 4. Any questions on how I got this way? Good, didn’t think so.

-“Gornisht” means “nothing”, but is apparently applicable when the opponent’s net is empty.

So there you go. That’s pretty much how interesting I found this game where the Hawks didn’t ever have to think about hitting the clutch and even with being tied up in the 3rd just kind of futzed their way to an easy victory.

-Some Stars fans have gotten on my case before for not considering Stephane Robidas a god amongst men. Watching Toews seemingly whisper Robidas out of the way to deflect the opener in pretty much confirmed my theory.

-A goal from a Patrick Kane turnover at the offensive blue line? When was the last time we talked about that? I can’t even remember.

-The third power play saw Joel Quenneville employ a “Fuck this. I’m tired of watching this shit” lineup, with the third line plus Handzus out there. While this isn’t the same as last year, it’s not too different. Last year, Q juggled personnel from opportunity to opportunity, which I thought then and still think now conveyed a message to the players of “I have not fucking idea what I’m doing and neither do the yes-men on either side of me.” So yeah, don’t count on the power play to do much anytime.

-McClure’s a little farther ahead of me on the Screw-Bolland track, but I may catch up. He had one nifty pass to Kruger in the 2nd, but other than that? Look at the CORSI. Who’s far and away the most negative? And that’s in a game where all you had to do was to intake oxygen to have the say against the Stars. He once again dogged it back on a shorthanded rush for the Stars.

What’s it going to take? I wonder if it’s even possible to “flip a switch” for Bolland when the playoffs arrive. Is he hurt still? Does he not care? The answers can’t be comforting. Sharp and Bolland have yet to take the lineup together for a month now. When they do, probably at the weekend, we’ll know exactly what Q thinks of his play. My hunch is it will not be glowing.

-So not fucking shocking then that Kane’s only point came when he extended a shift to get out there with someone else, was it?

-How did Foley and Edzo credit Stalberg’s goal to Handzus’s play when it was all Stalberg, exactly?

-Bachman had won three consecutive starts before this. College students will study how for years.

-There’s something oddly satisfying, almost perversely so, about watching a player get to tee it up full blast from the circles and seeing it bulge twine to just short of the breaking point. Maybe more so when it’s Hjalmarsson doing it.

I may be overstepping my bounds here, but I feel I cannot finish this without addressing the events of the day. I know a lot of you come here for distraction and to shut out what goes on in life for a few minutes, and I apologize for piercing that.

Obviously, it was rough on all of us. If you’re like me, and have spent serious time in Boston and have friends there, you had an anxious and tense period of time (everyone connected to me there is fine). Not that that makes my sadness and heartache any more worthy than anyone else’s, of course.

It is awful when the world reminds you how cold and senseless it can be. But just because it’s capable of that doesn’t mean it is defined as that. It is capable of as many things on the other side of the spectrum as well, and probably shouldn’t be defined as that either.

What I will say is that one thing that I cannot stand is when something like this happens, people rush to say that so much doesn’t matter and this illustrates it, like sports for example.

I don’t buy that. Maybe it doesn’t matter as much, but it matters some. Watching the Hawks, being a fan, talking about hockey with my friends and you lot brings me joy. It obviously does for you too, otherwise you wouldn’t be here. And anything that brings you joy, even for a minute or two, matters.

And there are thousands, if not more, of things that bring us joy on a daily basis, even for a minute. Days like today makes them see distant and unreachable. But they’re not. They’re all around us. And it’s why cowards like whoever perpetrated this today can’t break us. They won’t win. No matter how dark they can make the world seem for a period of time, there’s always something we will look for and find to brighten it. And then we’ll find another. And another. And suddenly the evil is washed away. And it’s that that keeps us from living in fear. We may get scared from time to time, we may overreact. But it won’t last. You can’t take away all we have.