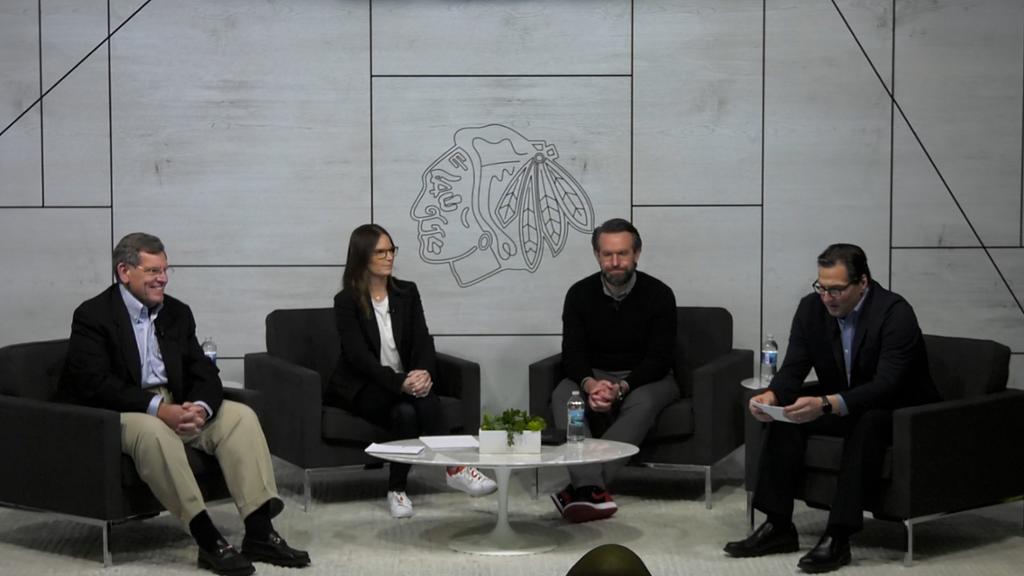 The Hawks continue to be physically incapable of not stepping in it, both on the ice and off. They’ve lost 6 of their last 7, essentially no-showing it against both the Canucks and Wild this week, finding themselves ahead of only the Coyotes in the Central Division—and it would be a stretch to even call Arizona a pro hockey team, if we’re being honest.

And yet, the actual news surrounding this team as of late was Rocky’s outburst at the town hall press conference before Wednesday’s game against the Wild, which cemented him to Moron status for life on this fair website. I genuinely have no idea what the fuck Rocky thought was going to be asked in the organ-I-zation’s first press conference since the Kyle Beach story permanently changed the landscape of this team and the NHL as a whole? I also have no idea why the fuck he didn’t have a prepared statement, even to just read it halfheartedly off a teleprompter like he did to begin the presser? Really, all he had to do was say nothing, because the first question wasn’t even directed at him. You’d think that would be something he’d be good at doing, considering what went down with his players and coach under his leadership. Maybe he’s just mad that all his pals in the old guard got justifiably canned?

No matter what his intentions, his reaction and his half-assed press release apology means the Hawks continue to be the center of the NHL’s biggest shitstorm, as more and more Hawks fans seem to be leaving the team for good. It shows that Rocky hasn’t learned, and that Rocky likely doesn’t care about learning. And as long as Rocky is at the helm, I won’t be handing over any more money to this team.

As much as the on-ice product continues to pale in comparison to what’s happening off the ice, this is usually the week’s wrap, and games were indeed played, though if you missed them you’d be in the majority. And it seems like the players on the ice have a similar “I-don’t-give-a-shit” attitude, getting outscored 8-1 this week. The only player who seemed to show any emotion was Marc-Andre Fleury every time he gave up a goal. Which happened often. No thanks to the defense, which seemed flat-footed and lethargic for most of this week.

Kirby Dach was nothing special these games either, going -4 for the week with of course no points and really thriving in his New and Improved role as Checking Center on this team by getting consistently steamrolled by Canucks Monday night, as checking centers do. Look, the poor kid wasn’t in control of where he got drafted, but dear God, letting him believe that he isn’t a goal scorer cannot possibly be the answer. His confidence is obviously shot, and since this team seems to have no success developing scorers of any kind, who knows if the answer even lies here?

It’s all such an epic clusterfuck, in every sense of the word, that I am genuinely not sure where we go from here. We have one sure-fire prospect in the entire organization. And that prospect is likely ready for the NHL, but the Hawks are keeping him down in Rockford, probably so they don’t have to say they have zero sure-fire prospects in the entire organization. Derek King is the interim coach, but Marc Crawford is the real Man Behind the Curtain with an abusive history himself. Oh, and maybe Peter Chiarelli will be the next Blackhawks GM, because if you think things couldn’t possibly get any worse, they always can. The Hawks are attempting to rebuild the team in all facets, but how do they expect to do it when no player, GM or coach in his right mind would sign here after everything that’s gone on over the last year?

The All-Star Break couldn’t have come at a better time—I think just about every Hawks fan needs a break right about now. We’ll be back next week, perhaps with the regularly scheduled programming.