Take Me To Your Backwoods: Game 2-3 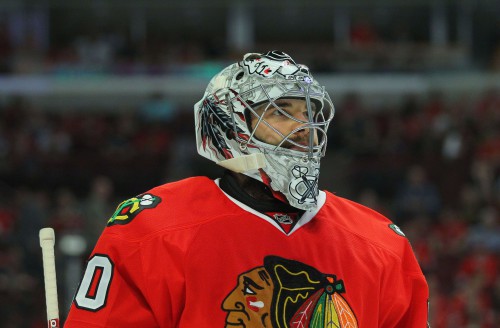 Going back over something I may have left out in the aftermath of Game 2 and heading into Game 3.

-The score kind of blights it, but the Kings and Hawks at even-strength had the same amount of Corsi events, Fenwick, and shots on goal. That might lead some to conclude that we had a return of “CRAW-STINK IS TERRIBLE” but really only Carter’s goal would I have a problem with (Muzzin’s was pretty perfectly placed). Just one of those things where their power play scored one more goal than the Hawks (and the Hawks really can’t lose the special teams battle because this makes it clear just how even they are at equal strength) with the Kings punching back on the counter.

Really I think it just illustrates how even these two teams are, and how all of us might have gotten carried away a little by Game 1 and the first 38 minutes of Game 2.

-Speaking of Crawford, while the national media loves to pick apart the glove hand, Crow’s biggest weakness or tendency is when a player is coming down one of the wings and he gets off his angle. All throughout his career, if an attacking player is coming down on the rush on one of the circles with a shooting lane, Crow has had a tendency to leave his shortside way too open. Usually it’s when coming down his left and that glove, but Carter was on the other side and still had plenty of room shortside. I’m sure this is listed higher on the scouting report than his glove.

-One of the things the Kings did expose in Game 2, and the Wild did throughout the second round, is that the Hawks just don’t have the depth they did last year. We can talk about “they haven’t played 60 minutes yet,” but the thing is with the holes in the lineup they really can’t. They can’t roll four units who can consistently push the play every shift. At some point, Versteeg’s vacant gape and whatever pod person is parading around as Patrick Sharp take the ice. Or Handzus gets beat. Or the 4th line can’t overcome it’s insane zone starts. Against a team as good as the Kings, they’ll take advantage.

At forward, the Kings are the deeper team. They have Stoll and Williams on their third line, and Williams has been consistently one of the better possession players in the league for years. The Hawks have the aforementioned confusion. This isn’t Michael Frolik and Kruger combining to push things any more.

-Andrew Shaw’s return should help, and more than I would have thought. If nothing else Shaw plays in straight lines and does get in on the forecheck (even more so when on a wing, which is where he should be). The Hawks have really lacked that on the bottom six since Saad has been moved to play with Kane. We mentioned Versteeg and Sharp’s problems, Bollig just can’t get there in time leaving Smith and Kruger to do it mostly themselves. Smith had one of his more effective games in the corners in Game 2, somewhat due to a flipping of their usual zone starts (they only started three shifts in their end).

Of course, Shaw will probably replace Regin which would only be a slight improvement. Whereas coming in for Versteeg or Bollig would be a massive one. Then again Smith is probably going to be needed between Kane and Saad in L.A.. Unless the plan is to have all the Kings centers get in a massive brawl on their bench fighting over who gets to skate against Handzus and hurt themselves.

-Sharp makes for a real conundrum, because when he’s not active in the offensive zone, for whatever reason, it’s hard to figure out what he does. At this point I wonder if you can have him playing with anyone else other than players who can make up for what he’s not doing right now, which is basically Hossa and Toews. That would leave Bickell to help out lower down the lineup, maybe on the other side of Regin and Shaw? Regin and Morin sounds even better, with Handzus being told to go to Manhattan Beach and stay there. But that won’t happen.

-The thought of last-change in this series switching to LA now really has me itchy. Unless Sutter keeps opting to have Toews and Kopitar skating against each other, concluding that no one else on the Kings can handle the assignment (which might be true). But again, the Hawks can’t really flourish with the top two lines playing to a standstill like they did last year, unless Saad can keep channeling son of Zeus form like in Game 1.

-Another example that the Hawks lack attacking depth is that once again another bottom pairing for an opponent had an easier night than they should have. We remember Clayton Stoner not getting what he should have had coming to him. Game 2 saw Alec Martinez be the Kings’ Corsi leader, and his partner Matt Greene not too far behind him. Sure, Greene got turned into plasma by Nick Leddy on a power play, but that should have happened more and more. It didn’t. Only Doughty and Muzzin suffered on the possession board because they had to deal with Toews and Hossa consistently.

Obviously, this is why we push for Morin because no matter his faults, he drives possession and the Hawks need it on their bottom six. You want Greene, Martinez, Mitchell, and Voynov on their heels and chasing in their zone. Hawks haven’t done it enough.