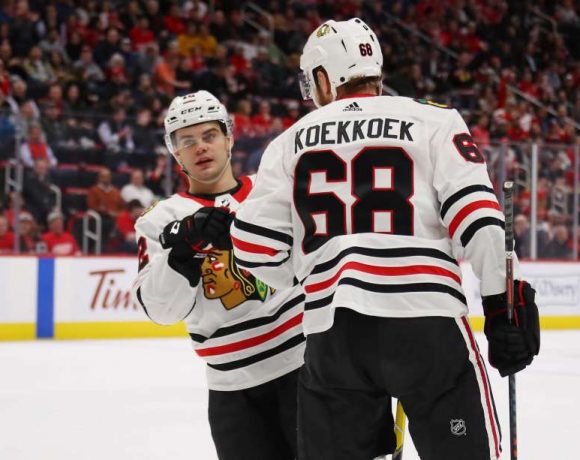 Live From The Five Hole – Dept. Of False Hope

Well it’s all over but the math, and Pullega, Fifth Feather, Sam, and myself have grievances to air. As always, no subscription is necessary, grab the audio after the jump at any number of outlets.

The sad thing is, however infinitesimal, that there was a good portion of this game that the Hawks played with some gusto, verve, pepper, whatever word you want to use there. But it might be a while before we see that again. Tonight’s loss leaves the Hawks six points behind the Zack Wyldes, having played three games more. Unless they take both the games in the next month in St. Paul in the reg, they’re going to finish second. There simply just isn’t much to play for the rest of the season, which is going to lead to some awfully snooz-y hockey.

Anyway, for tonight, both teams came out of the break rested and wanting to push the pace. The mini-problem was that neither teams is really capable of playing at the pace they attempted tonight, at least not for any long stretch. Thankfully they didn’t stop, which made for some wonderful entertainment. But there were a lot of missed passes, turnovers, scrambles at both lines, which did open things up for chances, at least for the first 40 minutes.

In the end, the Hawks were undone by two bits of bad luck and two bits of Hjalmarsson and Keith getting caught just a tad out. They also may have fallen victim to going a bit conservative in the 3rd period, only managing one shot in the last seven minutes or so. But I won’t hate on them for thinking at least a point at a Western Contender’s garden (in the shade) is a nice enough haul. Two shots wide that kick right back out in front, with Hammer on the first and Keith on the second not really having time to go from trying to front the shot to tying up whoever was in front (and on the second it caught up in Crow’s pads anyway). That’ll happen.