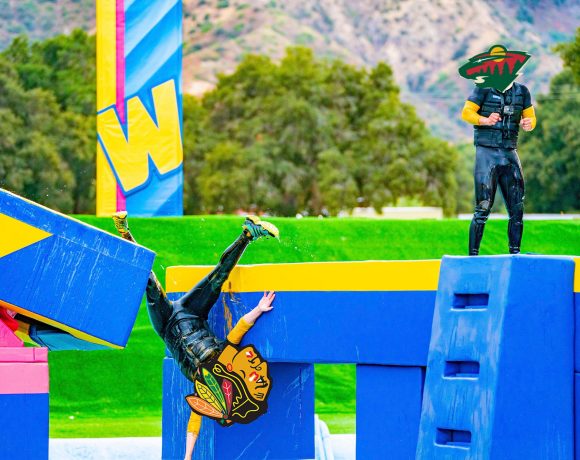 With some in the Hawks front office apparently deluded enough to think that they had some type of outside chance for the team to sneak into the playoffs, this series against the Wild loomed large in the schedule. After getting broomed in both games, hopefully this will put to bed any thought of the team sneaking into the postseason and set everyone’s focus where it needs to be: using whatever Jaws of Life apparatus Kyle Davidson can come up with to extricate this franchise from the flaming clown car pileup left behind by Stan Bowman and John McDodough.

This was quite the ass kicking. The Hawks special talent of showing up out of sorts and giving up goals in the first 5 minutes of a game reared its ugly head here, as most people at the UC hadn’t even found their seats yet before MAF had already let in two goals behind him. It didn’t get any better from there on out.

After the dust had settled, Old Friend Ryan Hartman had potted two goals (increasing his already career best to 18) and Fleury had been chased from net halfway through the 2nd period. The defensive structure in this one was nonexistent, and the Hawks hung the “not interested” sign above the bench before the halfway mark of the first period. It was a stinker, and the type of game you see quite a bit towards the end of January during the Bataan Death March towards April.

While the effort in this one was much, much better, the end result was still the same. With Coach King surprisingly opting to go back to Kevin Lankinen after he came in relief of MAF after he got yanked the night before, the Hawks played much better in front of him, jumping out to a 2-0 lead before Erik Gufstasson took a dumbass penalty with less than 2:00 to go in the 1st period where the Wild inevitably scored on the ensuing power play.

In reality, it could’ve been much more than 2 goals from the Hawks in the 1st were it not for the efforts of  Wild goaltender Kaapo Kahkonen. He absolutely stole a goal from Jonathan Toews in the waning minutes of the first period, throwing his left skate in the air from prone on his belly to kick away Toews’ wrister. Kahkonen was in position all night long, and made some excellent saves on DeBrincat in OT to keep the Hawks out of the win column.

Henrik Borgstrom (who has looked slightly better of late, hopefully increasing his trade value) potted two, along with a sick PPG from DeBrincat. Kane continues to be snakebitten, and is clearly frustrated by his lack of production. Kevin Lankinen looked much better, but still is not the answer to the Hawks goaltending question of the future. At this point, there’s zero reason for Lukas Reichel to be wasting his time in Rockford. Bring him up and give us something to watch going forward, because it’s all we’re really gonna have.