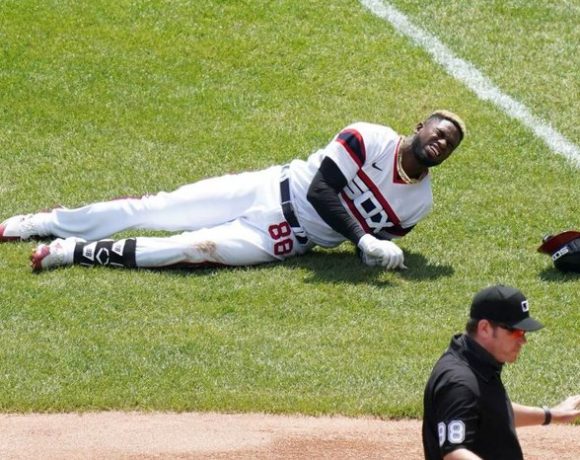 I was hoping when I wrote up the analysis of what could be done with the lineup after Eloy went down with a torn pectoral muscle back in March that it would be the last time I would have to do such a thing. What a fool I was.

Last night, the worst case scenario was confirmed by Rick Hahn about the status of Luis Robert going forward this season after he went down like he was shot beating out an infield single in the loss to Cleveland on Sunday. Diagnosed with a grade 3 strain of his hip flexor (an odd way of saying he completely tore the entire tendon from the hip bone), Robert will not even begin to work on any baseball activities for 12-16 weeks, let alone be on a rehab assignment. Even on the most optimistic of timelines, he wouldn’t be back on the field before late September at best.

In reality however, the greater concern for him will be his range of motion and overall mobility going forward. The player that immediately came to my mind when I heard the diagnosis was Bo Jackson. While not the same injury (Jackson had his hip dislocated while being tackled from behind, which resulted in damage to the blood supply to his entire hip and caused avascular necrosis), the fears of a reduced level of athleticism for him is real. There are two body parts in baseball that when injured are almost impossible to play through. The back is one and the hips are the other. Everything he does is either powered by or enabled by motion through the hips. If they aren’t returned to full functionality with healing and rehab this could be career-altering.

So first and foremost is hoping that Luis can come back completely healthy and mobile. After we take that into consideration, now we ponder the second half of this equation: What do the Sox do from here and how can they plug that ginormous hole left behind?

As it stands, the White Sox have 1.5 functioning outfielders on their roster. I only count Billy Hamilton as .5 of one, because until he can hit above a .225 average (something he hasn’t been able to do since 2018) he’s nothing more than a defensive replacement for whichever 1st baseman LaRussa currently has in left field. Also, calling Adam Eaton a functioning OF is being fairly generous, as he’s gone into a tailspin at the plate since the 3rd week of April. Adam Engel is also at least 3 weeks away, as he’s had a setback in recovering from his hamstring strain with zero guarantee he wouldn’t turn around and hurt it again with the way he plays. Leury Garcia can play a decent center field, but you also need him to fill in when Moncada, Anderson and Madrigal need a breather. So internal options are limited/nonexistent.

Down in the minor leagues, the closest thing to a major league ready prospect (and I use that term as loose as Robert’s hip muscles currently are) is Micker Adolfo, who’s only spent 90 plate appearances above single A ball, and slashed .205/.337/.632 at AA Birmingham. Unless he’s hiding some superpowers that he’s yet to make apparent, he’s not the answer at all. Yoelqui Cespedes has yet to take an at bat on North American soil, so hoping he could step in is futile as well.

The free agent pool outside of Yasil Puig is drier than the Sahara, and at this point if Puig remains unsigned there’s probably a damn good reason for it. This leaves the Sox one viable option, and that’s the trade market.

Unfortunately for the Sox, everyone on the planet now knows they’re in the market for outfield help so the asking price automatically goes up. In addition to that, the trade market in early May is notoriously slow, and for good reason. Really no teams have been eliminated this early, and the ones that are realistic about their chances probably don’t have much that the Sox would want anyways, or they’re smart enough to try and wait until the deadline where they could conceivably start a bidding war for whoever’s services they’re selling. This is why I’m not going to include Kris Bryant on this list, as if the Cubs have two functioning neurons left they know the asking price can be tripled at the deadline for him. All that being said, here’s the more realistic possibilities for Rick Hahn to pursue:

The first one here also makes the most sense, and probably should’ve happened at the exact same time Rick Hahn traded for Lance Lynn. While Gallo has only hit 3 home runs thus far, his .410 OBP would slide right into the middle of a Sox lineup that leads the AL in the category. The power hasn’t shown up yet, but some of that could be attributed to pitchers refusing to give him anything to hit due to zero protection in a moribund Rangers lineup. Gallo has 2 years of team control after this one, and being that they’re the higher end of the arbitration years they could be pretty expensive, thus lowering the asking price. In addition, keeping him around in 2022 and 23 solves the RF problem if/when Luis returns to the height of his powers.

The option that would cost the Sox not much in terms of prospects and moreso just money (and therefore the least likely to happen) would be Blackmon. While Blackmon has gotten off to a terrible start as evidenced above, he has an all-star pedigree backing him up. Just last year he slashed .303/.356/.804 so the ability is still there, and as Nolan Arenado is proving this year the splits away from the space station environment that is Coors Field isn’t what it used to be. With him still having 2 years left on his deal and earning $21 million in 2022 it wouldn’t take much more than a willingness to eat his salary to pry him loose from a Rockies team that’s hell-bent on a rebuild.

The tastiest option on this list is also the most problematic. Marte is in the final year of his deal with the Marlins and has already said he wants to test the free agent waters in 2022, making his trade from the Fish very likely. The only issue is that he’s currently sitting on the IL with a fractured rib, and is not likely to return to action until the first week of June at the earliest. Despite that, it probably wouldn’t affect the asking price much since the Fish would realistically get him back long before the trade deadline with plenty of time to build his value back up. The cost for this 4-5 month rental will be the steepest out of all of these, and probably the most pie-in-the-sky. That being said, if you want an impact player than can not only hit but play the position vacated by Luis Robert then Marte fits the bill perfectly.

The question then remains what (if anything) Rick Hahn is willing to give up. With the threat of a lost season in 2022 due to a labor stoppage most likely spearheaded by the skinflint owner of the White Sox, are we willing to wait around 2 years to see this team at the height of their powers?

As it stands now, the Sox have enough pitching and hitting to easily keep them  in the mix with Minnesota and Cleveland. With Eloy projected to return to the team before the playoffs begin, there’s no reason to think that they couldn’t snag a Wild Card spot bare minimum. Hahn can talk about “windows of contention” all he likes, but the fact of the matter is that the Sox traded a starting pitcher in Dane Dunning (who fits that window perfectly) for one year for Lance Lynn. He’s pushed some of his chips in now, and in my opinion it’s time to toss the rest in. I don’t want to wait until 2023 when he has the excuse of a Giolito extension to not add again.

No more waiting, Get it done.