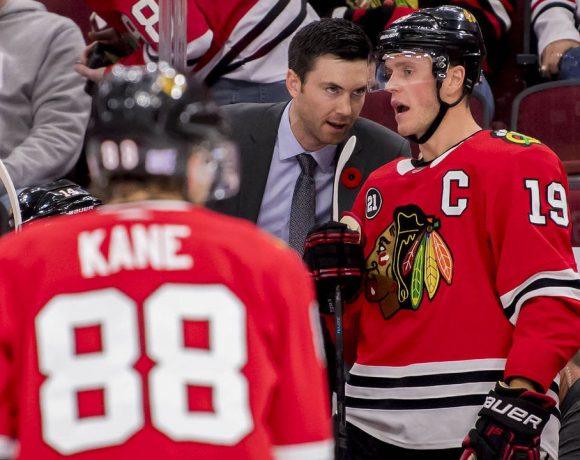 Live From The Five Hole – Pattern Against User

Well the Hawks have taken 11 of 12 points, but don’t worry, Sam, Pullega, and myself still find plenty of shit to gripe about. As usual, the audio is free after the jump.

Much like the lineup decisions of of Joel Quenneville, the lyrics of At The Drive-In and Mars Volta lead singer Cedric Bixler-Zavala can be positively inscrutable. And while known more for his wild mop of curly hair that flails in the breeze during the wild and sometimes spastic live performances of both bands, Zavala often sports an equally unkempt beard.

At The Drive-In emerged out out of El Paso, TX in the late 90s and early aughts with post-hardcore bombast and a limitless array of tempo changes augmented by incredible live shows. But just as the band reached the apex of its popularity after the release of Relationship of Command in 2000, the band fractured into two offshoots- the more radio friendly (but still challenging) inclinations of guitarist and co-song writer Jim Ward and his band Sparta, while Bixler-Zavala and Omar Rodriguez-Lopez formed the even more baffling Mars Volta, channeling their dormant prog rock inclinations. At The Drive-In has since reunited for the occasional one-off festival show, but new material seems out of the question. But no matter the project, Bixler-Zavala and his hair and beard will surely challenge listeners both in their patience hoping for a new ATDI release while also pushing new sonic boundaries.