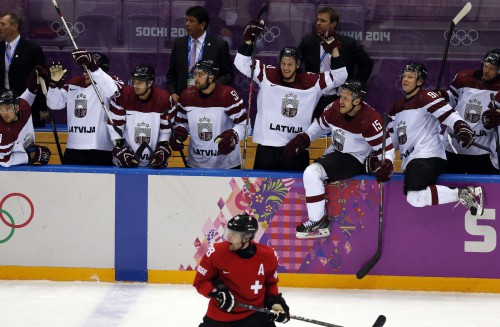 We finally have the quarters set, and it finally feels like the tournament is really starting. We’re going to get some games that could be a thing, especially Russia-Finland. The Czechs and Yanks could be a better game than at first blush, and of course it’ll never happen but we’d all laugh forever if Canada somehow found a way to lose to Latvia. Though Ted Nolan would probably be never allowed in the country again. Which wouldn’t make it any harder than it’s been for him to get and keep a head coaching job, really.

So what went down? Slovenia ghosted past Austria and I’m really not sure that should have happened. But Slovenia has been a very spiky team this tourney, and even though Austria has the slightly better pedigree they just haven’t looked like anything resembling a threat. I guess you can’t handicap things by counting up the NHLers like you do with ex-Cubs in the World Series. Anze Kopitar had himself a night.

Russia was able to negotiate Norway, though it took them a little longer to completely settle it than you would think. There’s clearly nerves with this team, and you wonder what the tension level will be like if Tuukka Rask is shutting them out late in the second or early in the third. But we’ll get to that.

The two best games were the two that went off at the same time, because of course they were. The Czechs were all over what has been a disjointed and at times disinterested-looking Slovaks to get out 4-0. Jaromir Jagr and Tomas Plekanec were just about everywhere and it looked to be a rout. You also have to ask if Jaro Halak can’t beat out this Lasso joker to be in net for this game, then just how far are the Blues going with him? Of course this won’t matter when they trade for Ryan Miller.

Then Marian Hossa happened. He simply dragged the Slovaks by the dick into at least making the Czechs sweat (though with the humidity everyone was sweating) with two goals and making something happen on every shift. But it wasn’t enough, and now let’s make sure the Slovakian hockey federation packs him tightly in ice and marks him fragile for his shipment home, as well as mistakenly putting an address in Tasmania for Handzus.

Disappointing from the Swiss today, who found their lack of goals cost them hugely. Which I suppose it always was. Latvia was able to get the opener and then a power play goal, and Switzerland simply didn’t have the cutting edge to break them down twice to even get to overtime. Even though Latvia’s goalie looked like he was ready to pass out in the 2nd period. Not good enough from the Swiss, who have really started to be heard from on the international stage in the past few years.

All that leads us to the quarters, which have shaped up nicely.

2am – Sweden v. Slovenia: Yeah, the Swedes are beat up but they’re not beat up enough or dumb enough to let this one slip. And Henrik Lundqvist is playing too well. The defense too solid, the offense too opportunistic. I’ll give Slovenia the credit and say they will make this harder on the Swedes than they should, even on the second of a back-to-back (considering the humidity having the day off today might turn into a real advantage).

6:30am – Finland v. Russia: Fascinating this one. Does the depleted depth down the middle for Finland cause them real problems against Datsyuk and Malkin? Is Rask too much of a trump card? Can the nippy Finn forwards get at what is at best an underwhelming Russian defense? You know the Finns will keep it close (forgetting that whole 2010 semifinal for a minute, because Kipper is finally in a retirement home), and when they do and Putin begins that glare from the stands how will the Russians respond? They haven’t been a synonym for “grace under pressure” exactly. You wonder. And this feels like the perfect slot for a Selanne stomach-punch goal, doesn’t it? I think the Finns send the hosts home.

11am – Canada v. Latvia: Well, the Canadians certainly caught a break as when you’re a team struggling to score you don’t want to see the Swiss on the other side. Also considering Latvia’s goalie is going to be half water by the time this one faces off, and it really should be the kind of batting practice fastball the Hosers need to find their feet again. Latvia has made it pretty difficult on everyone they’ve seen of course, even staying with Sweden. But after the superhuman effort to keep the Swiss at bay, turning around and giving the Canadians a game seems a bridge too far. Battle of the 49th looks on Friday.

11am – USA v. Czech Republic: Seeing as how most of the good work the Czechs have done has come from Jagr, you wonder what he’ll have left on the second of a back-to-back. But Krejci and Plekanec are enough down the middle to make you worry, though does anyone really trust Ondrej Pavelec in a big game? Not even the Jets fans among you would raise their hand. The US seems to have a special burr on their ass in this tournament. It’ll be close for two periods but the US pulls away in the 3rd, I think.

We’ll have a thread up when it all kicks off in the wee hours.