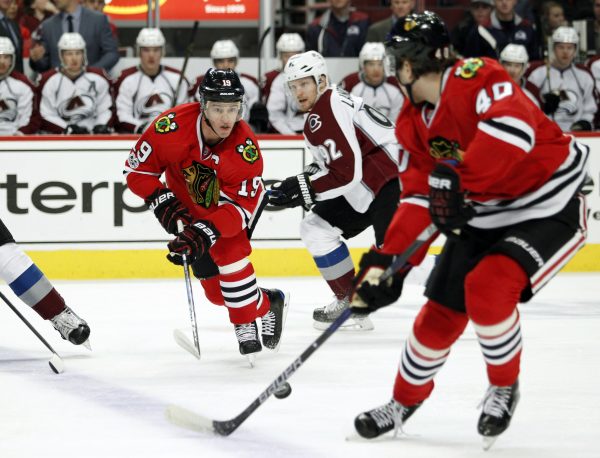 If this game didn’t serve as the perfect microcosm for the health of these two franchises, then I’m Dale Tallon’s uncle.

With just under ten minutes left and Colorado holding a 3-1 lead, Jonathan Toews tipped in a Duncan Keith point shot. Some 45 seconds earlier, it appeared Toews was still in the offensive zone by a foot when Richard Panik crossed the blue line. The Avs rightly challenged and ended up being burned by a technicality because Panik did not touch the puck while Toews was offside.

So in one corner, there were the Chicago Blackhawks who had a similar call go against them in Minnesota about a month ago. The Hawks were able to hold on and win the game in overtime. In the other, there were the Colorado Avalanche who are playing out the string and looking for any reason to fold up the tents. And they didn’t disappoint tonight.

–I can’t believe Ed Olczyk was actually right in a coaching analysis but I’m still befuddled how Jared Bednar didn’t call a timeout after the Hawks tied it at 3. Tanking aside, the Avs probably still had a chance to draw a result out of that game and at least feel a little good about themselves for their road effort. Instead, they got buried and only appear closer to a perennial lottery pick for the foreseeable future.

–Three games in and John Hayden has certainly established himself on this roster (Obviously subject to change at any moment with Joel Quenneville behind the bench). Appearing on the scoresheet is important, of course, and he registered another two assists tonight. However, a couple other things equally as important have jumped out.

In tonight’s game, he destroyed Erik Johnson near the end of the second period that led to a 2-on-1 for Toews and Panarin. Earlier in the second, he gained possession deep in his own end. Instead of blindly firing a pass to clear the zone, Hayden calmly circled back in his own corner to relieve the pressure of Colorado’s forecheck and then made a pass to a Hawks defenseman leading to an easy breakout.

Last night, he was able to maintain possession in the corners as he had a defender practically sitting on him. This happened on more than a few occasions.

For a guy whose biggest criticism was lack of skating skills in the NCAA, these sort of plays serve as evidence that he certainly seems to have a lot of confidence in his ability.

–Right, the offsides challenge. Look, we’ve been down this road with all four major sports and it seems like the more challengeable plays that are allowed, the quality of the product suffers. The NFL is just a game surrounded by whistles, challenges and catch rules that no longer make sense. MLB challenges take far too long and end up being wrong too many times. The NBA is still in decent shape as they only check replays for buzzer beaters and 2 vs. 3 pointers.

We’re only a couple years removed where the NHL was lauded for their replay system. It was also because the only thing they challenged were whether a goal was legal. The offsides challenge has only led to more confusion about what used to be a relatively simple rule to understand.

You can’t be in the offensive zone before the puck. Simple.

Now we have to know whether a player has the puck on his stick, has possession, if the blades of their skates are touching the ice while they’re in the offensive zone, what rotation the Earth is spinning at and whatever else. It’s just too damn much and all it ends up doing is confusing a fanbase that needs no help doing so. It also serves to turn off any new coming fans who won’t waste their time trying to comprehend a simple rule.

I guess that sort of defines most things the NHL does as a whole so maybe it makes sense.

–Minnesota continued their slide tonight as they dropped another one in regulation to Winnipeg while also holding a players only meeting afterwards. The Hawks opened their lead in the Central to 7 points and even with the Wild holding a game in hand, it’s hard to imagine the Hawks falling asleep at the wheel long enough to let them back in.

Years from now when the Hawks are scratching and clawing for 80 points a season, we’ll look back at this game fondly. Enjoy it.