High On The Hog: Meeting The New Kids 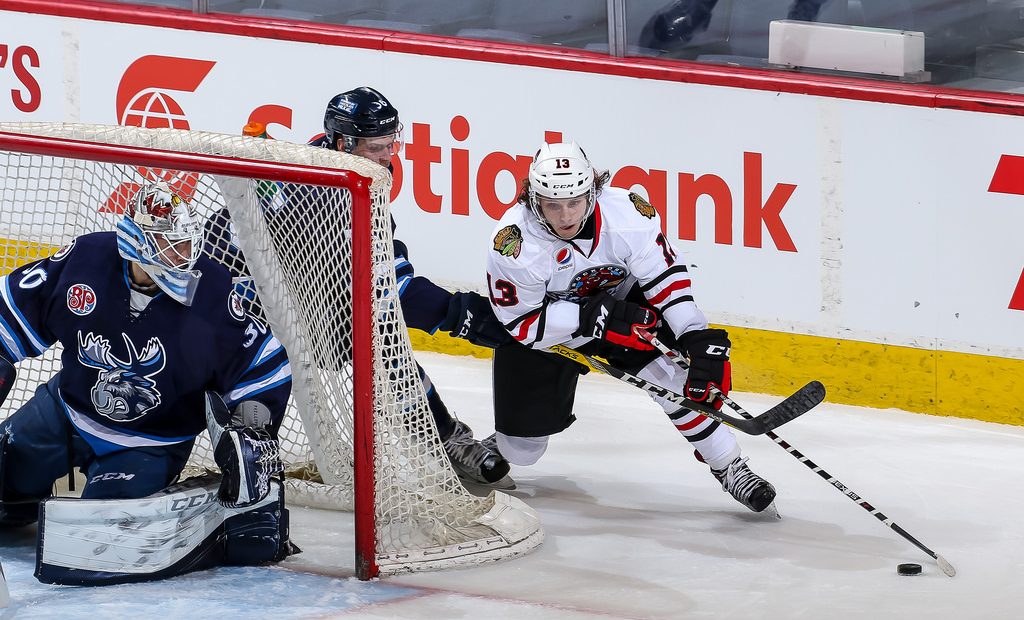 The Rockford IceHogs got an influx of new talent last week, with some of the new kids making an immediate impact. The Hogs managed three of a possible six points in three contests this past week.

The two newest faces belonged to defenseman Luc Snuggerud and forward Anthony Louis, who both signed amateur tryout contracts following their signing with Chicago. Both players got into action beginning this past weekend.

Louis did not log a point in his first two games, though he did send the Hogs home winners Friday night in Manitoba with the lone shootout goal in a 2-1 Rockford triumph. Snuggerud had an assist in Saturday’s loss to the Moose.

To make some room for the two former college standouts, the IceHogs sent a pair of AHL contracts to the ECHL. Robin Press was sent to the Indy Fuel, while Tyler Barnes was loaned to the Allen Americans.

This past week happens to be a week in which I am unable to while away my time with hockey games. No lines for the action…no worries, they will return next week.

The Hogs picked up a point but lost their seventh straight game in front of the home fans at the BMO Harris Bank Center.

Rockford took a 1-0 lead on the power play 6:54 into the contest. Brandon Mashinter got the puck out to Ville Pokka at the right point and skated to the front of the net. His deflection of Pokka’s shot also caught the stick of Kyle Baun on the way past Ads goalie Marek Mazanec and off went the horn.

Pontus Aberg tied the game with a goal midway through the first. The Hogs went up 2-1 at 14:08 of the second period when Mashinter and Baun got in on the action once again. The two carried the puck into the Manitoba zone, with Baun hitting Vinnie Hinostroza coming down the right side. Hinostroza’s stick handling capped off a nifty scoring play as the puck was shoveled past Mazanec for the goal.

Justin Florek’s shortie tied the game for Milwaukee moments later. The Admirals took a 3-2 advantage with a power play goal midway through the third period. With goalie Jeff Glass on the Rockford bench, the Hogs got a late equalizer off the stick of Hinostroza, who took a faceoff win by Tyler Motte in the high slot and fired past Mazanec to tie the game with 1:39 to play.

Milwaukee prevailed in the extra session, though it took most of Gus Macker Time to do so. Aberg took a drop pass from Mike Ribiero and sent in toward the net. Jeff Glass made the first stop but Aberg followed his shot and ended the game with just 11 seconds to play.

The Hogs snapped a seven-game losing streak thanks to Anthony Louis’s shootout conversion in his first game in a Rockford sweater.

After neither team could dent a net over the first two periods, Rockford got a break when a bouncing puck hopped over the stick of Moose defenseman Nelson Nogier. Tyler Motte beat Nogier to the puck in neutral ice and transported it into Manitoba territory. The shot rang off the left post; Kyle Baun was right there to corral that little doggie and send it past Moose goalie Jamie Phillips. The Hogs led 1-0 104 into the third period.

Manitoba drew even 11:14 into the final frame with a Chase DeLeo high slot offering that got by IceHogs goalie Jeff Glass. It was the only shot of the 38 Glass faced on the night to get through. Nonetheless, the score remained knotted at a goal apiece through regulation as well as Gus Macker Time.

Glass stonewalled Kyle Connor, Jack Roslovic and DeLeo in the shootout. Phillips stopped Michael Latta and Brandon Mashinter and the game was on the stick of Louis. The rookie went backhand-forehand to get Phillips out of position and end the contest with a IceHogs win.

Rockford dropped the rematch as the Moose built a big lead with the game’s first three goals.

Ryan Olsen picked off a ring-around attempt by Ville Pokka, skated to the left post and inserted the puck into a wide-open Hogs net at 13:43 of the opening period. Dan DeSalvo added a redirect tally at 4:03 of the second for a 2-0 Moose advantage. A Jack Roslovic goal midway through the game put Rockford into a three-goal hole.

The IceHogs got in their first score of the night just ahead of the buzzer in the middle frame. It came off a faceoff win at the left dot by Michael Latta with just over three ticks left on the clock. Tyler Motte received the puck in the high slot and fired on goal. The initial stop was made by Manitoba goalie Eric Comrie. Luke Johnson was in position to collect the rebound and jammed it into the ropes, cutting the lead to 3-1 at the second intermission.

Glass’s night ended 59 seconds into the third period when Kyle Conner skated to the right dot and beat the Hogs goalie to the glove side. In came Mac Carruth to mop up for the remainder of the contest. Connor got his second goal 1:20 later on a Moose power play to put Manitoba up 5-1.

Rockford got back to 5-2 14:00 into the period when Jake Dowell pounced on a long rebound of Luc Snuggerud’s blast, giving the new kid his first AHL point. Motte picked up a goal with 14 seconds remaining, knocking in a Gustav Forsling pass into the cage from the left post.

The Hogs can look forward to a home-and-home with the Grand Rapids Griffins, currently the leaders of the Central Division. Friday’s contest is at Van Andel Arena, while the scene shifts to Rockford for Saturday’s tilt.

Follow me @JonFromi on twitter for some thoughts on the IceHogs a few times a week, along with game updates.