In case you didn’t know, the Blackhawks are coming off a year in which they iced one of the worst defenses in the NHL. That isn’t hyperbole. Last year, they gave up 292 goals as a team, which is only better than the Senators, who gave up 302. If you are in the realm of the Senators in anything, you fucking suck. Their PK finished dead-ass last at 72.7%, after finishing 20th at 79.1% the year before. They continue to throw Brent Seabrook out there based solely on his contract. They had a chance at Bowen Byram, who will likely be ready to contribute THIS YEAR, and didn’t take it.

Instead, they traded a perfectly serviceable Dominik Kahun for Olli Maatta, who can’t stay healthy and skates like slugs fuck. They then turned around and got Calvin de Haan, who’s a nice second-pairing guy who might not even be ready for the first month due to a major shoulder surgery.

And then, dear reader, they traded Henri Jokiharju—one of the Hawks’s best D-men in limited time last year—for Alex Nylander, a 21-year-old forward whose shitty stats are only outdone by his stagnant-puddle-of-horse-piss work ethic.

If there were any doubt before, we can relieve you of it now: Stan Bowman sucks shit at finding defensemen, and he can’t do a goddamn thing right unless someone else hands it to him. That includes the Lehner signing, so if you want to bring that up, fuck you.

I’m usually not one for palace intrigue, but everything that swirled around Jokiharju last year made a stupid trade like this seem inevitable. I worried about it on a few podcasts recently: Harju was vocally upset when the Hawks sent him to Finland to play in World Juniors. Colliton constantly played him less and less when he got back, despite the fact that his season-long numbers were the best among all Hawks D-men at the time. Harju wasn’t happy when they sent him back down to the AHL when he got back for that very reason. He had every right to be.

It’s simply unfathomable to trade a 20-year-old defenseman who had a 54.3 CF% (5.4 CF% Rel) on a team that couldn’t corral an iron puck with a magnetized stick and not get any defensive help back. Harju may have needed some seasoning. He may have been light in the ass. But he was probably a Top 4 guy on this team, even WITH de Haan and Maatta coming in. He may not have been an in-his-prime Duncan Keith-esque savior, but he could have been very good. His limited stats showed that last year: When he was on the ice, the Hawks had the puck more. When he wasn’t, they didn’t. Guess fucking what? When your team sucks golf balls out of garden hoses on defense, anyone who can possess the puck is valuable. And now, we will have the joy of watching him turn into Buffalo’s #2 next to Rasmus Dahlin, because that’s absolutely going to happen.

The thing that’s most frustrating about this is that for all the shit we gave Quenneville for not giving young guys a chance, he did the exact opposite with Harju. He played him consistently, let him make mistakes, and Harju looked overall fine doing it. The numbers flesh out a better performance than the eye test, but either way, Harju looked decent at worst.

Then along comes Beto Motherfucking O’Colliton, with his shitty man system and recent regurgitations about needing MORE GRIND to the game. I want to have it both ways, wherein Colliton has no say in anything (likely the case) and all of the say in this move, but I know that probably isn’t it. Still, watching Colliton bury Harju on the depth cart in favor of replacement-level guys like Carl Dahlstrom, Slater Koekkoek, Brent Seabrook, and the rest of the defensive Bring Down Bunch makes me wonder if this is Colliton’s first Big Boy Decision. And if it is, that motherfucker needs to put his Pampers back on, because this is shit.

So what did the Hawks get in return? One Alex Nylander, a 21-year-old left wing with 19 NHL games to his name. Right off the bat, he’s not a defenseman, so what the fuck are we even doing here?

Second, his AHL stats aren’t particularly impressive. In 165 games, he has 86 total points, 30 goals. That comes out to .52 points a game. From a guy who’s touted as a skilled shooter. That’s WORSE THAN HENRI JOKIHARJU, who had 17 points in 30 games AS A DEFENSEMAN, which is .56 points a game. I know that’s a stilted comparison, but holy fucking shit what is this trade?

Third, Nylander isn’t good on the defensive side of the puck, which is super great for a team whose possession was verifiable dog shit for most of the season. Where the fuck you gonna put him? On one of Anisimov’s wings? The fourth line is probably set with Caggiula–Carpenter–Kampf. Shaw’s likely gonna be on the top line because fuck you. You’re not breaking up DeBrincat–Strome–Kane. And we haven’t even accounted for Wedin, Kabulik, and Quenneville, all of whom portend to get a shot before Nylander. You gonna put Nylander on the top line with Toews instead of Saad? Holy shit, that’s exactly what they’re gonna do. Pray for Mojo.

Fourth—and you should be furious that we are at a fourth complaint about the return following a trade of the Hawks’s ONLY young, mobile, NHL-ready defenseman—the scuttlebutt is that Nylander has motivation issues, that he half asses it sometimes. So he’ll be a great fucking fit here with Duncan “Fuck You” Keith and Brent “Best Shape of His Life Because Spheres Are Shapes Fuck You” Seabrook, whom the brass is so scared of that they traded Henri Jokiharju for some joker who struggles to compete in the fucking AHL. Good. Very good. Tickets still available.

They’ll call this a swap of prospects, but it is anything but. Harju showed last year that right this instant, he’s at worst a third-pairing bum slayer. Nylander hasn’t shown no one nothing, other than he has an older and much more talented brother playing in New York (or Toronto, if you’re into the whole factual thing -ed.), which is apparently all it takes to become the return on the kind of player the Hawks need right now.

Stan Bowman doesn’t know what he wants. He doesn’t know what he’s doing. He’s afraid of his bloated, angry, shitty #7 D-man, and because he’s a coward, he kowtowed to him. The Hawks defense wasn’t good going into this year, and given two chances to improve it THIS YEAR with Byram and Jokiharju, Bowman completely fucking missed. And for what? A forward with motivation issues whom the Hawks have no need or use for while the core is still intact. What a good offseason for Stan Bowman, master negotiator.

Harju is better off, but that doesn’t do much for us here. You wanna argue that all of Harju, Boqvist, Beaudin, and Mitchell won’t make the team? Fine. But if that’s the argument, then the three that remain better be good, and fast. Stan and his Band seem to think that’s the case, but why should any of us believe that they have any idea what they’re doing with the blue line? What have any of them done to show that they have any fucking idea what they’re doing at all?

They have no plan, and their process is shit. Just cut my fucking head off and kick it into the lake. 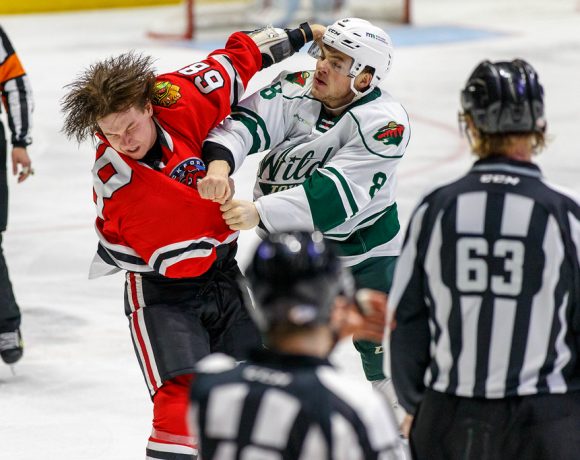 High On The Hog: The New I-90 Shuffle

Game #48 – Hawks vs. Canadiens: Lineups & How They Were Built