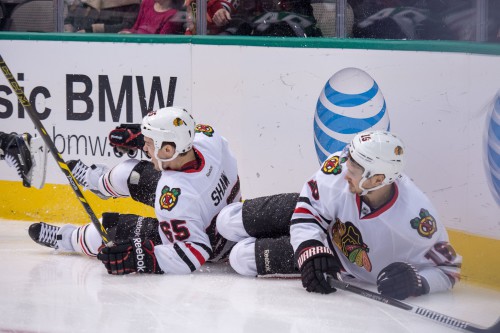 We don’t need to wait around to analyze this one. In a way, this was a good thing. I, and possibly others, possibly the Hawks themselves, had let Wednesday’s win fill our head with dreams and we had to have them all. As my compatriot McClure quickly pointed out, there is no such thing as an important win before April. The Hawks found that out with authority tonight in Texas. Everything that was good in New York was bad tonight.

While the record without Patrick Kane could still be considered gaudy, you’re still talking about a team that’s managed 22 goals in those 10 games. That’s simply not good enough. It’s been shutout three times. It seems when the top line doesn’t binge, they’re not going to score more than two (Sharks meltdowns not withstanding). And each line has its issues, and we’ll get to that in a moment.

Tonight’s problem was clear enough. Lindy Ruff teams are looking for barely of a hint of an excuse to shotgun up the ice with four or five guys. They’re looking for you to turn the puck over in the neutral zone or at their blue line. Which is why they guard their blue line so resolutely and are begging you to put pucks in deep past them. Which is why it’s poor strategy to try the Brazil ’82 act at the blue line every time, because the Stars are going to streak away from you in a hurry. Fast enough that the Hawks can’t catch them. Which is why you saw so many odd-mans heading the other way.

Because when you attack the Hawks’ defense with speed, it’s a problem. Because as it’s been all year, the Hawks defense is slow. And it can be goosed into mistakes (Hi Michal!) when under severe pressure. That’s how you get what we got tonight. It’s really not any more complicated than that. The Hawks wanted to make sparkle-piggies at each blue line, turned the puck over constantly, and should have been punished to the tune of seven or eight. They only have Crawford and the Stars’ balloon-handedness around the net to thank for not being completely embarrassed. Hopefully it acts as something of a refresher that they’re a long way from the finished product.

Let’s round it out:

-The Hawks’ offensive problems can be partially attributed to a couple things. One, it hasn’t really gotten any contributions from its newcomers. Kimmo Timonen’s struggles are well-known, though he’s ever so slowly at least looking up to the pace. Antoine Vermette looks a little lost. The adjustment from being a purely defensive player on a purely defensive team to this one might be bigger than we anticipated. This isn’t to say I don’t think he’ll figure it out because I think he will, but it would be nice if that were soon.

-Secondly, the third line, which had produced goals in three of the past four games (if we count Richards’s power play goal against Arizona) spent the night watching Kris Versteeg put on a child’s magic show. Sometimes players are described as a straight-line player, in that they get up and down the ice and to the net and not much else. Kris Versteeg is the opposite of this, though I don’t know what the term would be. Blind kid’s coloring book? I’m going with that.

-I know Toews had two Neuvirth-assisted goals against the Isles and two more assists, but something still doesn’t look right there.

-You can’t continue with Michal Rozsival any more. I don’t care how rusty TVR might look in Rockford. You’ve got 11 games here to see what your other options are. If neither Rundblad or TVR can do it, you can just shove Rozie back into the playoffs after a nice long rest. He wasn’t doing anything on the first goal (though not the only culprit) and the fourth goal was all on him. This isn’t going to get better. The playoffs aren’t going to come back to him. Enough, everyone can see it and anyone who says they don’t is purely in denial. David Rundblad simply cannot be worse.

-The Stars second power play goal is only what we’ve been screaming for the Hawks’ PP to have forever. A point-man opening a lane and simply getting a puck through and someone in the high slot to tip it. It’s just not that hard.

-This one’s frustrating with the results that went on earlier. While the Hawks are within reach of the top of the division, they’re also in reach for the Wild. Anything is possible here. This was also one you felt like they had to have, along with the next three because after Friday the degree of difficulty on the schedule goes to just short of 11. Gaining ground in that gauntlet might prove difficult.

At the end, I’m not really worried about results and placing so much as process. Tonight was most definitely a step backward in that category.