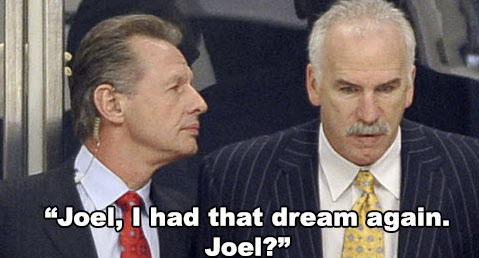 We have our first shot fired in what will apparently be Hawks-acalypse ’17. Today Mike Kitchen was fired as assistant coach, and it’s kind of amazing he was still around to be fired. But we’ll get to that. There are a lot of angles that would be a ton of fun to speculate on from this and could turn out to be utter horseshit. But we’re going to do it anyway because…FUN!

First off, I’m dying to know whose decision this actually was. There’s almost no way it was Quenneville’s, because Kitchen has been an extension of Q his entire career. It’s hard to believe that Kitchen could have been doing anything that drastically different this year than he ever has, and even Q would have to recognize the historic and epic failure of the penalty kill in the season’s first month was A. a perfect storm of events and B. really had no bearing on their playoff ouster.

So did Stan Bowman fire Kitchen himself? Or did he make Q do it? How much of a fight did that cause? Oh god just hook it to my veins!

We can kind of guess that Stan wouldn’t be able to do this on his own, at least not completely unilaterally, because of the same reason it was amazing that Kitchen was still here at all. Back in the summer of 2012, that summer when it was rumored that Q was looking to extricate himself from Bowman and go coach in Montreal under his other running buddy Marc Bergevin (who has since proven to be a blithering idiot his own damn self), the scuttlebutt from people we trust is that a lot of the players in their exit interviews made it clear they thought Kitchen was a blithering idiot. And we kind of know that he is from his brief time doing whatever the hell it was he was doing behind the Blues’ bench. Now, maybe they didn’t think much of his hockey IQ. Maybe they thought he was more of a Q spy in their midst, when usually the assistants are something of a liaison between players and coach. Maybe it’s a combination thereof.

What we do know is that during this time of some upheaval, McDonough made it clear that there was a clear chain of command under him. The GM hires the coach (except not in this case), the coach hires the assistant. So Q fired Mike Haviland, perhaps as some sort of head on a pike to show his players who called the shots. He then hired Jamie Kompon to replace him, another blithering idiot (sensing a pattern here?) We’ve always speculated that deep down in places only revealed after a few belts of the brown, Stan would tell you how much he hoped Q would bolt for La Belle Province.

But Kitchen did stick around, the Hawks enjoyed enormous success, so no one was going to say boo about it then.

Ah, but now the Hawks have serious changes to make, and perhaps Stan Bowman has decided that it’s his voice that’s going to be the one that matters, and very much so. We know the Hawks’ front office has been something of a group effort, and that hasn’t always been good. Q had his say, Kitchen had his say, MacIver had his say, and so on (and this where if you want to suggest McD had his say on Bickell, I won’t stop you). On the surface, this appears to be Stan basically asserting himself and declaring he’s going to be the GM and Q’s gonna coach and that’s just how it’s going to be.

Because we know how many signings/trades were done to placate Q, and lately they just haven’t worked. Oduya certainly was, even though he was basically barf in the sun. But Q wasn’t ever going to play Kempny (how TVR has escaped this kind of treatment will keep us shaking at night for years). Andrew Ladd was a Q-pickup, even though the signs were there he didn’t have it anymore. Weise and Fleischmann were supposed to be, so Q didn’t have to trust Danault when it mattered. We could keep going.

The Hawks are going to have to launch at least one Q blanky this summer, and possibly more. Looks like they’re slowly warming him up to the feeling.

This kind of reordering of the pecking order may come too late of course. The Hawks have jettisoned an awful lot of young talent that they could use right now. Saad, Teuvo, Danault, Johns… and all for… Anisimov? But Stan knows it’s not a complete lost cause yet, with DeBrincat coming (I don’t care what anyone says he’s getting NHL time next year) and the contracts on the books making it so it’s going to be a disaster soon enough anyway. If he’s going to go for broke this summer, he’s going to do it his way.

It’s also been a curious few days. We had Q essentially calling out his players right after the series concluded, and then the first thing that Stan was clear about was that Q wasn’t going anywhere. It sounded like the lady doth protest too much, and either Stan was trying to quiet some player revolt or stop it before it started. I wonder if this move isn’t meant to placate some rumblings of discord from his players that he knows about or senses, and at least tells them he hears them.

It’s going to get more interesting.