Something In The Way – C.I.’s Season Preview: Patrick Kane 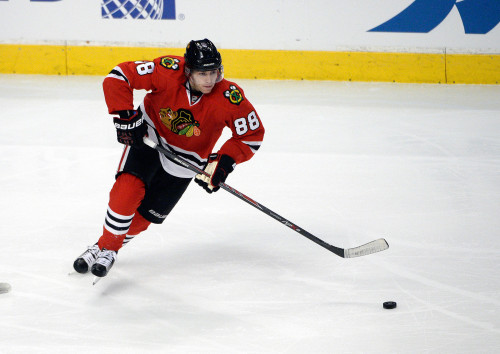 Oh goody, the best for last.

While the temptation or urge to go off the deep end here exists, I’ll keep this to on the ice as much as I can. Obviously, there’s still a chance he’s going to miss some time for something, so we’ll factor that in. But don’t worry, there won’t be any preaching here. At least I hope not. And figuring out what he’ll do on the ice is a pretty big mystery in itself.

For three quarters of the season, in a lot of ways it was Kane’s finest. He was leading the Art Ross race this late in a season for the first time, he was getting whispers about a possible Hart Trophy, and even after the Hawks had started to check out mentally during that portion of the season he was basically the biggest reason they were still picking up a lot of points. While it would be fun and easy to point out this is what happens when he gets to play with a real center after being in the wilderness for a couple years with Shaw or Handzus, and that was part of it, a bigger reason might be luck. Where last year a number of Hawks were snakebitten in terms of shooting percentage (Hossa, Sharp, Shaw, others), Kane saw his even-strength SH% jump up 4% from the previous two seasons to 15%. That’s why he was set to blow by his career high of 30 goals before he got hurt. It’s unlikely he can match that again, as his career percentage at evens is more in the 9-10% range. Kane also remained a somewhat sketchy possession player, which he’s actually been his whole career. Which makes his production even more impressive, though he’s been somewhat punished by rarely playing with Toews and hence playing with lesser possession players. Kane needs help in that department, and only last year did he start to get it after a drought. That should also be the case this year, you would think.

This Season’s Outlook: This has been up for some debate in the CI Offices the past month or so. Modeling Dept. Chairman Fifth Feather thinks Kane is going to be something next to awful, that the pressure and whatever else will be too much and he’s headed for a 55- point season. Charm School graduate McClure thinks, due to his past of being at his best when he has something to prove and has a massive chip on his shoulder, he’s going for 95 points and another run at the Art Ross.

Simply looking at the stats and numbers, I’ll take the easy way out and go in the middle. There’s no way that he’s going to match his shooting percentage from last year at evens, and we’ve given up on him racking up the power play points he almost certainly should around here due to the Hawks’ system continually being kindergarten recess football. He will be playing with the best center he’s had in a long while, as I’m of the opinion that Anisimov (when healthy) is probably a slight upgrade over Richards (and might do more work defensively to get Kane the puck more offensively). So maybe that balances out. There’s also a chance Kane will get an upgrade of winger as well, as last year was Kris Versteeg (though he was obviously excellent for half the season) and a declining Patrick Sharp. At the moment it could be Marko Dano, though that would make for an awfully small line. It could be Panarin, but same problem. Certainly will be a more dynamic player.

That’s if the law or the Hawks allow him to play the full season. I’m sure the term “rehab” has been kicked around the Hawks’ offices at some point recently for when this all blows over. Then again, to ship him off to Betty Ford midseason would take an awful lot of tires from an organization that’s shown it doesn’t really have any.