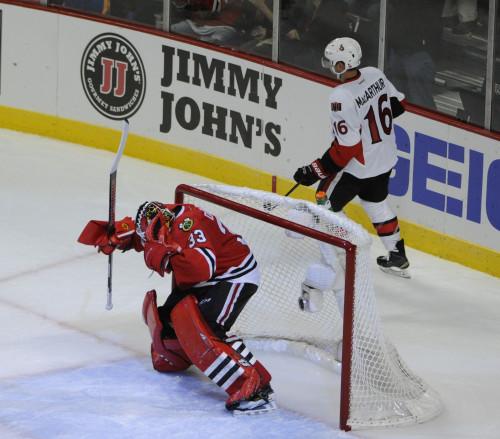 Let’s get back to hockey for the seven minutes before something else breaks.

Much like the backup quarterback in this town, although I suppose that’s a lot of towns (and recently the backup point guard), the backup goalie in Chicago has become something of a revered figure. I’m exactly sure when this started. Hackett over Belfour? Passmore over Thibault? When Khabibulin was stealing all his money after the lockout? Maybe it was two consecutive seasons of Niemi outplaying Huet and then Crawford outplaying Turco. Maybe we’re all scarred from watching Hasek leave after backing up Belfour and just assume every backup is now a multi-Vezina winner in waiting (KEENAN WANTED A TEAM AROUND LINDROS AND HASEK MY GOD!!!!).

It doesn’t hurt when that backup also happens to be from Chicago.

There will be more eyes cast on Scott Darling this year, as some still view him as a path to get some salary cap relief if he can prove to be starter-quality in the NHL (those “some” might be in the front office as well). Will he? Let’s find out (not really)!

You certainly can’t argue with the numbers on Darling. He took the backup job away from Antti Raanta, not so much Raanta losing it as the Finn’s numbers are actually quite similar. But we know how Q prefers big goalies, and Darling is certainly that (and with fantastic pads!). If nothing else, Darling was able to be quite the obelisk in net and the Hawks’ defense didn’t have to worry about where he would be or whether he could stand up to a scramble in the crease. Early in the season, Darling had something of an issue with his five-hole (usually happens to men as they age and not in their mid-20’s), and it’s seasy to see where someone 6-6 has a little trouble dropping to the ice quickly enough. He was eventually able to fix that, though would get exposed when having to move laterally quickly.

There’s no question he came to the rescue in the first round, with two standout performances in Games 1 and 4 that the Hawks won in overtime. After that, the Preds quickly figured out to get him moving in Games 5 and 6, and he was eventually chased in Game 6 and Crawford never gave the net back. Still, for a guy who came basically out of nowhere, it’s hard to argue with anything he gave the Hawks.

2015-2016 Forecast – It’s hard not to root for Darling, who has a pretty ridiculous backstory (and one the Hawks are never hesitant to play up). He’s overcome personal demons and just about the longest road imaginable to end up winning a Cup on his hometown team. You wouldn’t write this shit for fear of making everyone puke from the schlock.

If the expectations for Darling are to be a solid backup, grab 20 starts or so to keep Crawford fresh and be solid enough, he can probably do that. Toss him out against the less skilled teams that won’t make him move as easily as ones with real firepower can, and you’ll probably be all right. We know Crow doesn’t usually make it through a full 82 healthy, so there will be opportunities for Darling.

But there are a couple worries. As with Crow, Darling won’t be playing behind a defense that is going to limit shots — though in truth, Darling only had three appearances last year where he saw less than 25 shots as the Hawks shot-suppression was rather dogshit from December on. But they’ll probably be of higher quality now. It won’t be the free ride some backups have gotten recently for the Hawks.

Second, there’s a book on Darling now. Scouts have seen him, and it’s not going to be much of a secret where he struggles. If teams have the puck more against the Hawks than they have before, that’s more opportunity to get him moving side-to-side.

I don’t think it’s wildly optimistic to think Darling can prove to be a very capable backup, and if Crow were to have another injury absence Darling can most likely keep the season from sinking (though he’ll need help). But proving that he can take over the starter’s job in the future? Don’t see it. He just doesn’t seem athletic enough, and while Crawford isn’t exactly Muhammad I’m Hard Bruce Lee out there, he is a better athlete than he gets credit for to augment his size. No matter how big you are, eventually NHL teams figure out a way to open up net on you and you have to be able to quickly close it down.

But hey, the Hawks have entered the past two seasons with shaky backup goalie situations (Raanta and Khabibulin, arguably Emery the year before that), so it’s something of a relief to not be totally queasy on the nights Crow needs off.