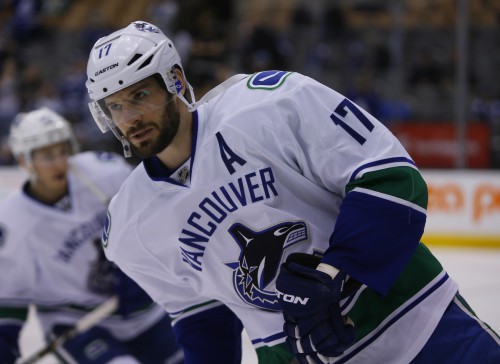 I should probably warn you. There’s going to be a lot of teeth-gnashing from the Triumvirate here before the trade deadline about a second line center. Yes, it mostly has to do with Ryan Kesler, and that’s heightened by our unconditional love for that player. Yes, he’s hated by a large swath of Hawks fandom and Hawks players (I can only imagine how icy the handshake between him and Toews would be if he were miraculously acquired). I know he’s not coming, but you always dream. But that doesn’t mean that it’s not a screaming need for the Hawks, and the struggles of the second and third lines the past month (or two?) has highlighted it.

Before I go any deeper into this, I do want to express a slight annoyance I have with those who counter with any complaint I have and a certain strain of argument I hear. It’s only to do with this particular strain, and it’s the one that goes, “How can you complain about a team that is tied atop the division and vying for the Presidents’ Trophy?” To be fair, we actually hear this more from members of the mainstream than we do you the informed fan.

But as we’ve stated many times, the Hawks should be viewed through a prism of whether they win the Stanley Cup or not. Regular season standings don’t matter. It’s not what we’ll look back on in the years to come. It’s not the stated goal of the Hawks themselves, and nor should it be. And it is this that the glaring hole on the second line becomes something of a worry. It doesn’t have to be Kesler, but it’s time that it was someone.

The other problem with discussing the Hawks is that they are so talented everywhere else that they can sometimes (repeat: sometimes) overcome holes in their lineup that other teams would not be able to. It’s why they were able to succeed last year with no real #2 center. But has that always been the case?

Some like to argue that the Hawks have won both their Cups without a true #2 center. This is simply not true. In 2010 Patrick Sharp played center almost exclusively, and actually had a pretty decent case for a Conn Smythe that year with his playoff performance. Unlike Toews, he did manage a couple big goals in the Final, including the equalizer in Game 6. So let’s throw that year out.

It’s easy to point out that the Hawks won last year with Michal Handzus mostly manning the #2 spot, and indeed the Hawks caught something of lightning in a bottle (especially in the last two rounds and the last two games of the Detroit series). But what about the two years before that?

In 2011, the Hawks were simply outclassed by Vancouver. I don’t think much would have turned that series, even if the Hawks were able to push it to the limit (partly thanks to the Canucks pretty much falling asleep in Games 4 and 5). But until Toews basically willed that tying goal in the dying minutes of Game 7 shorthanded, he’d pretty much been eaten alive by Kesler, though struggling through injury. The Hawks meanwhile were trying to support him through…. fuck I don’t even remember. Do you? I think Bolland, Kruger, and Ryan Johnson all took turns there during that series, which might be a reason Kane was nowhere that spring. Would a real #2 center have made the difference in tight Games 3 and 7?

The following spring, Toews returned from a concussion for the playoffs, scored in the opening minutes of Game 1, and other than his OT winner in Game 5 pretty much spent the rest of the series in a daze and grappling with Martin Hanzal. The Hawks attacked the Yotes behind him with Brendan Morrison, Bolland and Kruger again. As tight as that series was, maybe even one goal from a productive second line could have made all the difference. Would it have seen the Hawks be able to conquer what was a juggernaut Kings team that spring? Questionable at best, but I would have loved to find out.

Even last spring, it got dicey. The Wings canceled out Toews, and for 4.5 games the Hawks really struggled to find the goals. Only when the switch was made to flank Handzus with Hossa and Sharp (who would probably produce with me in the middle) did the Hawks barely survive. It’s easy to say they rolled from there, but keep in mind the Kings were either without or had a very impaired Jarret Stoll, Mike Richards, and Anze Kopitar, essentially eroding the strength of their forwards down the middle. And while the B’s eventually succumbed, Krejci and Bergeron did have Boston a few inches away from sweeping the Hawks (it really could have been that).

Overall, we’re fans of Stan Bowman. But his tendency to paw at problems or holes instead of occasionally tear at them can be a bit frustrating. Again, he’s tried to paper over this crack with Peter Regin, which is basically the same guy he’s always acquired to do this. These days, we’re all pretty sure he’s keeping that spot open for Teuvo Teravainen, who could be a star one day. And that’s not to be dismissed. But frankly, I’m not worried about future Cup runs that Teuvo may or may not be a major part of. I’m worried about this one right in front of us, the only one the Hawks are guaranteed. Sometimes I wish Stan had more of that attitude.

Look, none of us think Brandon Pirri is going to be an NHL star. But he’s at least as good of a solution as Regin or Kruger, whose game simply isn’t suited to be a scoring center. And the NHL playoffs are decided on very small margins, no matter how good the Hawks are. The Hawks path to another parade could easily be Colorado (Duchene, Stastny, and possibly MacKinnon or O’Reilly), St. Louis (Backes, Berglund, Sobotka, and a variety of decent 4th line centers), San Jose (Thornton, Pavelski, Couture) or Anaheim (Getzlaf, Bonino who has been a problem for the Hawks, Koivu) followed by Pittsburgh (Crosby, Malkin, Sutter) or the Bruins again. Are we sure center depth isn’t going to be an issue? Are we sure it hasn’t been before? Are we sure just one or two goals from a second line won’t be the difference?