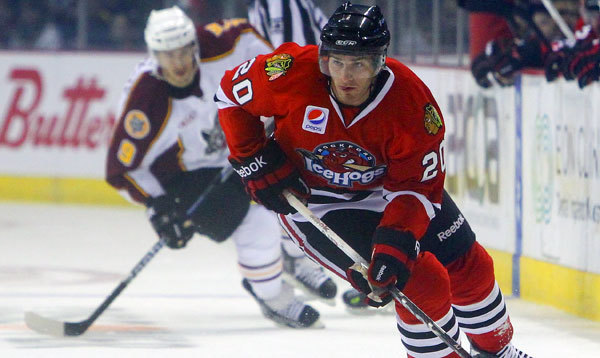 I feel like talking about some actual hockey. How about you? Yeah, let’s do that.

While you weren’t paying attention, or just bemoaning the current situation, the Winnebago County Bacon Bits have reeled off three wins in a row. They’re even over .500 if you can believe that. More to the point, despite what Tim Sassone hasn’t bothered to learn, they’re getting contributions from the forwards you want to see make those contributions.

This little mini-streak started last Wednesday on the Rock River against Peoria.

And like pretty much every other game this season for the Hogs, it was far from boring. The Hogs don’t know how to do boring….partly thanks to their wonky goaltending, abhorrent defense, and crack-addiction to the penalty box. They can score, but they’ll give up enough to cause Ted Dent to need that weird, green elixir they give you in hospitals when you have really bad heartburn. Well, you probably haven’t had it, but trust me it’s awful. Like if you have heartburn or wild stomach acids that won’t respond to your over the counter stuff, they give you this gelatinous stuff that looks like mushed up toad and….well, I’ve gotten off the rails here.

What this game saw was a perhaps a shift in the starting goalie job. Remember those calls last year for Carter Hutton to be promoted and the Triumvirate laughing when we weren’t crying? Yeah, don’t worry about those even if they were playing hockey within the city limits. After surrendering three goals on nine shots in the 1st against the devil-spawn of the Blues, Hutton was pulled for Alec Richards and hasn’t been seen since. According to Chris Block (our man in The Rock), teams have been picking Hutton’s glove clean and he hasn’t adjusted.

But from there, Richards only surrendered one goal on 17 shots in the final two frames and the Hogs came back through Jeremy Morin, who dented twine twice.

The Hogs then got to spend a weekend in Cleveland, which strangely is not a prison sentence yet. But it did result in two wins over the Monsters. Like is their wont, the Piggies handed out seven power plays, which helped Lake Erie get back into a game they trailed 2-0. But then Brandon Saad went through pretty much the entire team from end-to-end to net the winner. Kyle Beach also scored on a pretty nifty play. Richards stopped 30 of 32 shots.

The next night once again saw the Hogs march their way into the box to let a team off the mat. They led 3-1 with five minutes to go through Ben Smith, Rob Flick, and Chicken Hawk. But then Leddy and Ryan Stanton took penalties and the Monsters cashed in on both (it was Stanton’s fourth minor of the night). Luckily, Richards — who had stopped 36 of 39 in normal play — stood tall enough in the shootout and Morin once again was able to end things.

The Hogs best players of late have been Morin and Saad. Saad has four goals in the eight games since returning from injury, which he apparently had been carrying in the preseason. Having it completely healed has allowed him to showcase the beginnings of the player we thought he could be. Morin has scored five goals in his last 10, and is driving the net with no fear which leads you to believe he’s over his concussion concerns.

Kyle Beach has also maintained his fine form to the season, though he’s a much longer shot to get a look at whatever abbreviated training camp the Hawks might get around to than Morin or Saad.

The defense continues to be a problem, but not as big as one as discipline. The Pigs have been shorthanded more than any team in this league, and that’s probably heavily contributing to how bad the defense looks. Their kill-rate is actually in the top-half of the league. If it was any lower they probably wouldn’t have won a game.

The Hogs sit 10th in the Western Conference but have the same amount of points as 7th. If you want to catch them without having to drive out there, tomorrow night is your last chance for a while. They’ll be in Rosemont to face the Wolves at 7pm, but don’t return to the Runway Neighbor until the end of February. I’ll be there, so should you.