Ridin' The Storm Out 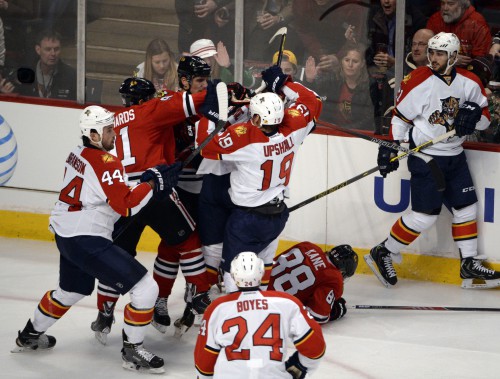 Hey the Hawks play that before every 3rd period at the UC, so I can use it.

Now that we have the cold light of day to refocus on everything, there’s some cleaning up to do.

While some have already begun speculating what the Hawks will do to fill in the gap left by Kane, that’s missing the point. The biggest problem isn’t at forward. It’s still on defense, and that’s where the Hawks focus has to be, for a multitude of reasons.

Now especially, the Hawks are going to struggle to outscore teams. That’s hard to do in the spring with a fully functional death star anyway. So the focus has to be in bringing the amount of goals and shots against down. That’s done with another blue-liner, be it Sekera, Petry, or some name we haven’t heard.

Second, I don’t think the Hawks have the prospects to bring in multiple bodies here. Think about it. The two younger absolute untouchables are Saad and Teuvo. What’s beyond that? McNeill, Danault, Johns would be the next tier I think. Well, all three of them have a role to play on the Hawks next season unless something goes wrong (like their coach not understanding how the salary cap works but let’s worry about that in the fall). You could lose maybe one of those, but not more than that without seriously kneecapping yourself for the future.

Beyond that, I would think the most attractive prospects the Hawks have are not even in the pros anywhere. But Tyler Motte, Nick Schmaltz, Hinostroza? A couple of the Europeans? All of these guys are years away from the NHL so I’m not sure how much value they would hold for any other team. You’d probably have to box up a couple of them in one deal, and to make multiple you’re probably strip-mining your organizational depth.

The Hawks are going to be even more gunshy about dealing a lot of draft picks after this Rundblad what-have-ya, and I’m right there with them. The only position of strength on the NHL roster to deal from is at forward, maybe, but now is probably not the time to chip away at your forward depth. So the resources for a deal are limited.

Third, and you knew I was going to say this, I honestly think Teuvo can do a reasonable Kane impression for five-six weeks. Not point-per-game like Kane was, I’m not that silly. But if given the same spot with Richards and Sharp, or any of the top six really, I think those plays we saw him make that Shaw or Bickell boned will get rewarded. Yes, scoring will drop off for the Hawks but I don’t know that it’s going off a cliff.

Of course, I fully realize that he’s going to be installed on Shaw and Bickell’s wing again with Versteeg skating with Richards and Sharp, but a boy can dream.

Lastly, the percentages have to correct at some point. Sharp’s, Smith’s, Shaw’s, they’re all due to rise. So is the team’s overall, as they’re still over a point below their SH% of the last three years. As I’ve pointed out on Twitter, if the Hawks had simply last year’s team SH%, they would lead the league in scoring right now.

It makes the trade deadline more interesting for sure. It’s gonna get funky.

-I’ve been wanting to address this for a while, and have hinted at it earlier in the year. I think this team gets viewed through the prism of 2013 unfairly at times, even by its own front office. Because it’s basically the same team.

But you have to look at how many players had a career year in 2013. A conservative list of players who had a career year in that championship season would be Kane (40-goal, 95-point pace), Toews (40-goal pace), Bickell, Stalberg, Shaw, Hjalmarsson, Oduya, Leddy, Crawford, Emery. I could probably throw Frolik on there, though not through numbers. That’s half the defense and forwards. That’s not to indict them, because any team that was that dominant is going to need a lot of people playing the best hockey of their career.

This year’s team, who is having a career year? Kane was, though he really wasn’t playing that much better than he did in 2013. He just didn’t have any company. You could argue Keith’s first half was as good as anything he produced, but not a level above. That’s where some of the problems arise, I should think.

-Kane’s injury has wiped away all the talk of dressing room problems that have marked the past few days. There are a couple aspects to all that I find weird.

First and foremost, as we mentioned in the program last night, it’s extremely eyebrow-raising that after being called out by their captain on Friday night, the Hawks came up with that vomited stomach acid on Sunday.

We’ve remarked how at times how it sometimes looks like the Hawks tune Quenneville out (sometimes out of hope). The frequent line changes have been met with worse performances, complaints in the press, and generally rolled eyeballs.

But Toews, he’s the hammer in there. We can’t fathom the team tuning him out. And yet when he airs grievances in the press and it doesn’t change much, that’s weird.

Second, over the past month or so I kept hearing the words “preparation” and “professionalism.” And that’s from multiple players. Clearly, not everyone is thrilled with how everyone else is going on about their job. What it refers to in detail, I don’t have any idea.

My inkling is that what they’ve been getting at is whatever’s going on off the ice, it’s time to get the fuck over it and do your fucking job. That’s my best guess.

What is going on? I don’t know. I’ve poked around a bit. Most of it sounds like old stuff which most of you already knew about. Some new stuff but no one was sure and I didn’t want to just throw shit against a wall here.

We’ve spent a lot of time defending them about their grief over Clint Reif. It’s an extremely tough thing to get through. Having said that, and having gone through similar, we’re coming up on 10 weeks since his suicide. At some point soon, you gotta put your head down and get back to life. It’s not easy, it sucks, but you’ve got to. I think the Hawks will get there soon.

Whatever else it is, it’s the kind of shit you don’t hear about when a team is winning. And it’s not something new or unique to the Hawks I’m sure. Put 25 guys in one room for six months at a time over and over and shit’s going to go wrong. They all deal with this.