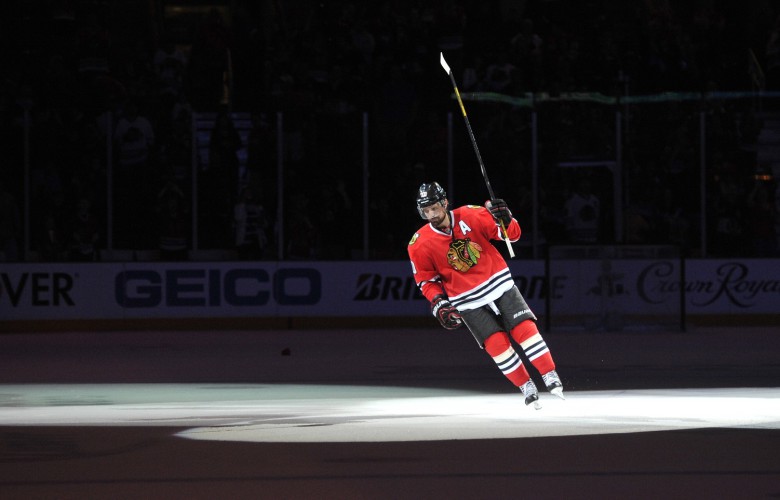 In all the visions I’ve had of this series in my own mind, not one of them contained Jonathan Quick getting pulled from a game. Hasn’t happened in the playoffs since 2010 (that’s nice symmetry), and though I don’t think it marks some sort of landmark or sea change more than just a quirky note, it does feel good. But then again, this is why The Fifth Feather is simply a manly man among just men, because he said the floodgates would open at some point if the Hawks maintained this kind of pressure. He knows so much, and is so handsome. He really doesn’t belong on this planet.

It’s a funny old game though, because it was the reverse of Game 1’s 1st period in that it ended with a false scoreline. While the Hawks were up 2-0, they really didn’t deserve to be based on balance of play. Just like the Kings had no business being up 1-0 after 20 in Game 1. But thanks to a couple handy saves from Crow, some wayward finishing from the Kings, and utter ruthlessness from the Hawks, they were already halfway home. To me, a two goal lead is nearing the horizon for this Kings team (especially without Richards), and a three-goal one requires a team from NASA. They just don’t generate that much.

Once again, the Hawks speed didn’t have an answer from L.A., and now they face all the questions going into Game 3.

Bullets after the jump.

-The first period had me very queasy, and that was even after Shaw’s opener. The Hawks precision on breakouts wasn’t where it was on Saturday, and thus there were more keep-ins and aimless flings for safety. But that’s not all on the Hawks, as the Kings were more determined to get the puck and crash for it below the goal line. However, that involved bringing their third forward lower toward the Hawks supporting forward, and their defensemen pinching in. That would leave more space behind, and when the Hawks can even get 2-on-2 heading the other way, the Kings have problems because one of their two is almost assuredly a plodder. May I present goals 2 and 4 for the Hawks as evidence.

-A couple lineup changes from the Kings tonight, one forced and one not. Richards was out, and Sutter scratched the huffing and puffing Jake Muzzin for Alec Martinez. Martinez is in the same mold, as he’s a pretty nifty offensive defenseman. But get him on the other end, and well, duck for cover. He played the Hawks 4th goal like a short-bus, exposing Matt Greene in space which is exactly where Greene doesn’t want to be. He got caught for Sharp’s mini-breakaway was well. Kane must’ve been giggling when he saw him on the other side.

-While the Hawks weren’t as sound on breakouts early tonight, that doesn’t mean they were awful. As the Feather said on Twitter (love that man), the second (and maybe killer) goal sprang from Toews being right near Bickell so that Bicks from along the boards could pop it right out to a supporting forward. Again, when the Hawks execute this they have at worst even numbers heading up the ice, which for them is an advantage.

-Man, that Jeff Carter can really snipe at the UC…when he’s down four. That makes him 0-5 in playoff games here, by the way. I think my highlight was in the 3rd when he totally got muscled off a puck by Nick Leddy.

-With Richards out, and even though he wasn’t really having that offensively dynamic a playoff (whatever his leading scorer status says), the Kings are short on creativity, and crucially so. Combine that with Kopitar looking every bit as hurt as The Royal Half said he’s been in tonight’s Q&A, and really the only answer the Kings have is their shovel-it-here-shovel-it-there-FIRE! mode of attack. As the Hawks are limiting that with their defensive responsibility, and you start to wonder if the Kings are going to score enough to take four of five.

-Brandon Saad was the best player on the ice for the first 40, and was finally rewarded with two apples. He once again horsed Doughty, and created the first goal by beating two Kings in a board battle. Jesus fuck, when this kid is 23 and filled out and knows the NHL game? I joked with my older brother that he’s wanted a Rick Tocchet on the Hawks since 1986. Might it finally be here?

-The only Hawk forwards to not register a shot tonight were Stalberg (who had an assist) and Bolland….who did a whole lot of not much.

-All the CORSI numbers look off because of a 3rd period where it looked like the Hawks were saving what they could for what’s ahead. I guess with a three-in-four stretch, you can’t blame them too much.

-Patrick Kane is the last of the four horsemen who needs to make himself known on the scoresheet, though he did have an assist tonight. But an explosion is coming, because he’s getting looks after clean Hawks breakouts and one of these games there’s a three or four-point destruction coming. Because he hasn’t shirked from this challenge like he did at times against the Wings, and that’s with the Kings sending everything at him.

It feels good now, but there’s such a long way to go. There’s a fury coming on Tuesday for the Hawks, and the Kings have been here before. The desperation they must feel now will only add to the angry-Poseidon act that they will throw from the off on Tuesday. But the Hawks are not the Blues. If the Hawks can weather it for the first 10 or 20, and the Kings get a little over-exuberant, that space behind their charging horde is still going to be there. And Regehr, Greene, Scuderi, and Martinez are still in no way equipped to deal with it.