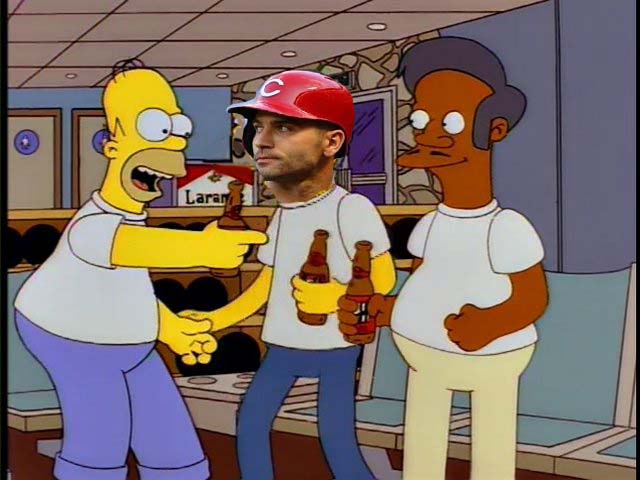 We’re going to try to add these to our baseball previews. At least as long as our sanity allows.

There are many signs of the apocalypse these days. Look around daily, and you’ll probably find one. Maybe it’s the imminent heat death of the planet. Or the fracturing of the political scene. Or increasing feudalist society across the world. Perhaps nuclear winter in the Middle East.

To be fair to Votto, he did start like this once, just once, before. In April of 2016, he hit .226 with a wOBA of .276. He struck out nearly a quarter of the time, just as he did this season. That time he was hitting a ton of grounders, which he isn’t that time, and we’ll circle back to in a sec. And when all was said and done in 2016, Votto ended up slashing .326/.434/.550 with a 158 wRC+. And really, that’s what we should expect from Votto until he doesn’t do that, even if we get to September 20th and he’s still doing this. I’ll still believe he’ll end up with superior numbers. It’s one of those things where even seeing the body won’t prove to me he’s dead.

That doesn’t mean there doesn’t feel like something’s off with Votto. One, he’s swinging at way more pitches out of the zone, and the real jump is he’s not getting to any of it. The past three seasons, Votto has made contact at between 75%-78% of the pitches he swung outside of the zone. This year it’s 63.1%. He’s making less contact than he has in a long time, and his swinging strikes are as hight as they’ve been in a decade. What’s the deal here?

You heard Jim DeShaies mention when the Cubs were in Ohio that Votto’s fly balls are way up, and that’s true. 42.5% of his contact is in the air, up from 30% last year and a career rate of 33.3%. It’s come at the cost of his line-drives, which is what you think of when you think of Votto. Those are down to 20.8%, from last year’s 31.4%, and his usual rate of around 25%. His hard-contact is down a touch, but not to these kinds of margins.

Is Votto trying to go for a little more power? Well, one of the signs of age is a problem with the fastball, and Votto is certainly having that. For his career, Votto hit .324 on fastballs and slugged .593. This year those numbers are .191 and .338, which leaves your jaw shattered on the floor. And Votto can’t seem to get to it anywhere. Check out the location of his whiffs on fastballs for his career and then this year: 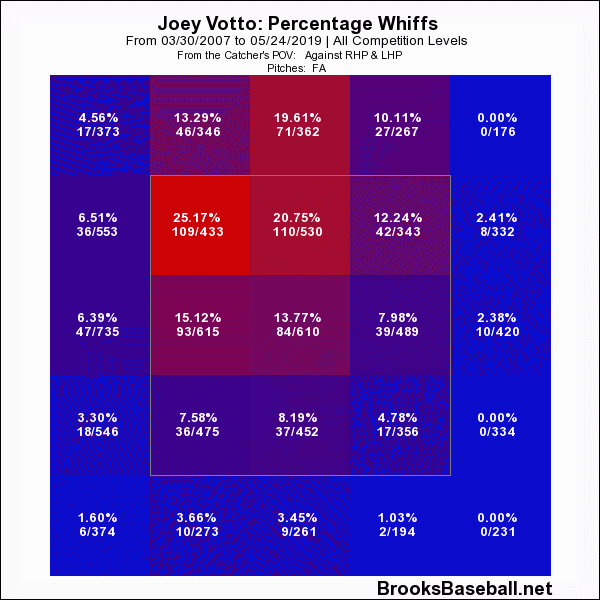 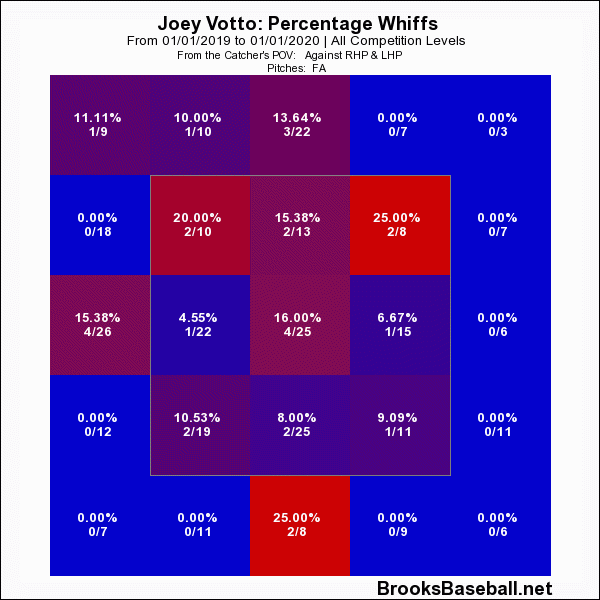 Votto’s struggles on off-speed pitches also suggests he’s leaning to get to the fastballs and is getting caught. He’s in-between. Votto simply doesn’t miss this much, so something seems to be up.

He is 35, which is when you’d think players would start to fade. But off a cliff like this? There is a comparison, and that’s Albert Pujols who is something of a contemporary of Votto’s. Pujols fell off the face of the Earth in his age 37 season, which may surprise you. At 36, while hardly the country-side wandering monster he was in St. Louis, Pujols had a 113 OPS+ in Anahiem. The next year it was 80, and he’s been a sinkhole ever since.

That can’t be happening to Votto, can it? The guy who looked like he could line a single to center whenever he wanted? This has happened once before, and then Votto tore a hole in the Earth. That turnaround in 2016 started in May. They’re still waiting on Votto this year.