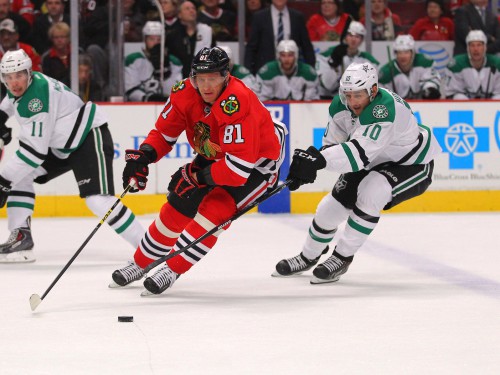 Just when we thought Blackhawks fans were going to mutiny, the Blackhawks finally got a little puck luck and trounced the Dallas Stars in front of a happy home crowd. All of those near misses and weird bounces went Chicago’s way much to the delight of not only the fans, but also the team. With a long road trip on the horizon, they could use a little confidence boost. Congrats to Brad Richards and his lovely family on his 1000th game and hey, thanks for those assists.

Core Message For weeks now, we’ve seen glimpses of what the Blackhawks can be, quite simply, a very talented team with a smart coach. More often than not, we’ve seen some sloppy play and bad luck leading the team to make rash decisions about how players are used and who they have played with from minute to minute in any given game. This game against the Stars, well the second and third period at least were far closer to a complete effort than we’ve seen in a while.

Demographics Since the season really got rolling and the Blackhawks started having some problems getting the puck in the net, Quenneville has had the line blender up so high that it’s amazing there weren’t guys left on the ice for 4 minutes at a time. Tonight, it almost appeared as though Quenneville took a deep breath and decided to roll with the lines he had chosen. Other than those necessitated by Power Plays and Penalty Kills, there were very few in-game line changes. Brad Richards was on the second line with Patrick Kane and that worked out pretty well. Hopefully Quenneville sticks with that for a while.

Quantitative Analysis The Blackhawks out possessed the Stars throughout the game. The game page with the graphs and numbers is here war-on-ice and here is the NHL Event Summary.

Target Audience After being named the 1st Star of the Game, Patrick Kane addressed the crowd at the United Center. This young man has been turned into a walking, talking, goal scoring PR machine. Whenever an issue needs to be addressed, he’s the one to do it. It’s amazing. When Dan Carcillo was first signed by the team back in 2010, it was Patrick Kane talking to the crowd (who hated Carcillo’s guts after the Stanley Cup Final) and getting them on his side. When fans felt that Corey Crawford had gotten the shaft by not being named the Conn Smythe winner in 2013, it was Patrick Kane putting him in the spotlight after the game and at the parade. Now that Carcillo has been brought back to the team, Kane gave the media some sound bites about not having only “skilled players” on the roster. With Andrew Shaw struggling this season, Kane gives his fight with Roussel in the first period the credit for sparking the team to turn it around. The crowd roars. The crowd cheers. The crowd eats it up and takes it as gospel. No one needs a front man in a suit when Patrick Kane is a walking, talking PR machine these days. That guy could probably sell his smelly socks for a million bucks.

TVR (Television Rating – in PR speak, Trevor van Riemsdyk in hockey speak) Trevor van Riemsdyk has probably been the most unexpected and pleasant surprise of the young season. Unfortunately, after taking a pretty wicked shot to the leg, it sounds like he’ll be sitting on the couch for a while. Having already lost part of a season in college to a freak injury (broken leg), this must be a huge disappoint for him. The Blackhawks will need to recall a defenseman until TVR can heal up and regain his standing in the lineup. I would think it’s likely to be Klas Dahlbeck but we should find out soon enough. Hopefully TVR heals up quickly.