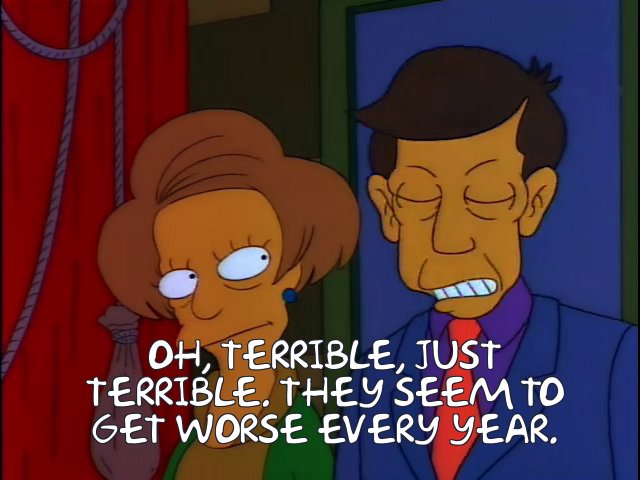 – I’m a bit worried that the Hawks are struggling to adapt to the Jeremy Colliton Route Tree in the defensive zone. On the Caps’s second goal, Toews managed to win a faceoff at the far circle in his own zone, which Seabrook correctly swung over to the near boards. Nylander was closest to the puck, but instead of chasing and clearing it, he stuck himself onto Ovi, giving Wolfenstein NPC Jonas Siegenthaler all the time in the world to retrieve the puck and keep the pressure on. In this case, I hope this was Nylander simply not having any idea how to play hockey when he doesn’t have the puck. But it sure looked like Nylander gave it some thought when he played literal man-to-man defense on Ovi.

Then, early in the third, Koekkoek ended up at his own blue line to defend . . . something? This led to a mad and unnecessary scramble for Crawford, as Erik Gustafsson was the only defender in the area.

If this is what Colliton’s full training camp is going to spit out, then Marc Crawford might need to squeeze his ass into his David Lee Roth pants sooner than we thought.

– It’s going to be really great when Alex Nylander finally arrives and starts playing hockey for the Chicago Blackhawks. I hear he’s an offensive dynamo. Can’t wait to see him.

– Dominik Kubalik on a line with Saad and Kampf doesn’t make sense. Neither of them is a playmaker. Kubalik has a booming shot. You see the problem. He still looked good tonight, but where he’s at really hampers him. What’s worse is that this is a result of Colliton shoehorning Nylander on the top line despite the fact that he has done nothing to earn that. Whatever.

– Adam Boqvist had an unfortunate blowout that led to the Caps’s first goal. He was a bit more noticeable in the third, a period in which the Hawks had exactly two shots on goal, so again, whatever. That Colliton didn’t use him once on any of the Hawks’s four power plays (opting for Keith and Seabrook instead because fuck you) is maddening, especially when he whipped out his throbbing galaxy brain by putting Boqvist on the PK in the third. Yeah, it’s only preseason, but that’s really something.

– Top Cat looked like shit all around. Nothing to worry about, but it happened.

– If Erik Gustafsson doesn’t score 60 points this year, he’s useless. He looked like a mummy having his wrappings pulled apart by two clowns on tricycles for the Caps’s fourth goal.

– The PP1 only works if 12–56–88 are constantly cycling. They did none of that tonight, and the PP looked like horseshit.

One more preseason game in Boston, then on to the old country.