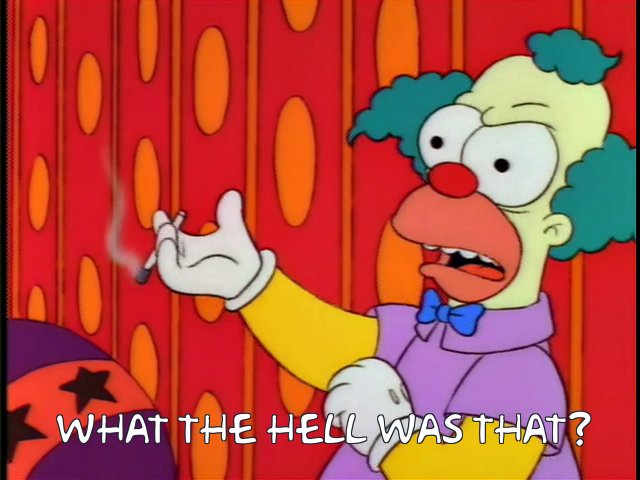 I’m a firm believer that preseasons in basically any sport are not worth getting stressed out about. They’re an extended audition for those on the fringes of the team, ostensibly they shake off some rust (debatable), and you’re just happy if the important players don’t get hurt.

With all that being the case, don’t take anything I say too seriously (like I normally demand serious consideration around here), because the Hawks looked pretty shitty tonight but I am not—I repeat NOT—letting it get to me, and neither should you.

–Robin Lehner looked less than comfortable tonight. He played half the game, gave up two goals and finished with an .882 SV%, which again shouldn’t give anyone ulcers but my bigger problem was that he was all over the place, and not in a good way. He was flopping around and losing his net; the second goal was a direct result of him using the crease as a slip-and-slide and the puck dribbled away from him and into the net. I get athleticism and all that, but flailing shouldn’t be the result.

–Kevin Lankinen did just fine, on the other hand, and the goals he gave up weren’t really on him—the defense got mesmerized (shocking, right?) on the first one, and the second was off Dahlstrom’s leg on a PK that looked characteristically chaotic. He finished with a .905.

–None of the core looked particularly impressive. Alex DeBrincat and Dylan Strome were quiet, Andrew Shaw whiffed on at least three or four shots and was pretty useless, Brendan Perlini did nothing, Slater Koekkoek was Slater Koekkoek, etc. Great seats still available.

–So Connor Murphy and Carl Dahlstrom are going to be our shutdown pairing, huh? At one point in the second period they had, respectively, 11 and 10 CF%. You did not mis-read that. But I know, I know, it’s a dumb preseason game, who cares. They ended with a 45 and 40 CF% so whatever, and Dahlstrom did get an assist, so yay?

–Who the hell is Philip Holm? I swear I was paying attention this offseason and during training camp, and I’m telling you I’ve never heard of this guy. But he scored a goal, he had a great keep on the power play that resulted in the third goal (he got the assist), and at 44.4 CF% he was behind only Murphy in possession for d-men. Sign him to a 7-year deal right now.

–The organ-I-zation is REALLY excited about Andrew Shaw being back and they want you to know it. During both intermissions they played an interview with him (hello, mute lounge), and I know my personal animosity towards him is clouding my judgement but I am already exhausted with this dummy. He nearly dropped the gloves in the third period—this is a PRESEASON game, lest you forgot. But there was plenty of stupidity to go around. De la Rose and some other oafs went after noted tough guy Alex DeBrincat late in the third after the Wings had re-taken the lead. So that shows you the level of play we’re dealing with here.

Two games, two losses, not freaking out yet. Onward and upward.