Pour Me Another – Round 2 vs. Minnesota Preview: The Forwards 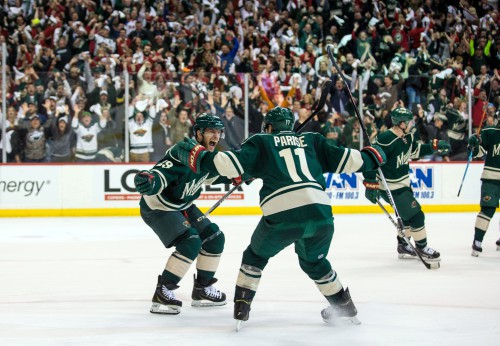 Finishing off the other half of our preview of the Green Men from St. Paul, today we move to the forwards. There is a step up in class from Nashville for the Hawks in this one. While the Preds were certainly not bereft of talent and depth among their forwards, the Wild have a higher top end with theirs and probably more depth as well. Whereas the Preds didn’t really have a 4th line, the Wild most certainly do and it’s one that has driven the Hawks nuts for a few years now. While the Wild’s D cannot play at the same pace that the Preds’ defense could, their forwards probably aren’t going to find a pace they can’t handle.

The other change in gear for the Hawks is that the Wild are far better and deeper down the middle than the Predators were. That makes for a problem, but not one the Hawks can’t handle.

At least, this is how they lined up against the Blues for the most part. This was the first year that the Wild finally got Mikko Koivu to the 2nd line, where in truth he’s always belonged. Having done that, Granlund only put up 39 points in 68 games during the regular season, and you’d expect a tad more from him given his vision and getting to play with a finisher like Parise. But given that he’s only 23 and injuries cut his rookie year of 2013 in half, there’s still a lot of room for growth.

Parise you probably know all about, a marvelous specimen who somehow plays a power forward’s game despite being generously listed at 5-11. He has a knack for scoring not just goals but big ones, as he demonstrated by coming out with two to send the Blues home for the summer. He also scored in their Game 3 win, and he came up with a few against the Hawks last year.

As Pominville gets older he fades more and more into a one-dimensional sniper type, but he still carries a lot of danger with his knack for just drifting unnoticed and suddenly having a wide open look to the net. And when he does he still has a tracer of a shot.

However, this line basically got its head kicked in possession-wise by the Blues, including having a 25% mark in Game 6. That was mostly against Tarasenko and Schwartz, so you’d figure Toews or even Richards and Kane behind it can do the same. And the Wild aren’t going very far if this line isn’t producing.

A Mikko and a Nino on the same line. What a world. Anyway, Stewart looks interested and effective again, which must mean he’s playing for a new contract in the summer and lo and behold, he is! When Stewie can actually be bothered, he can be a bowling ball of a player, looking unable to stop and turn direction without crashing into something first. He’s also got rocks for brains, so you should probably count on one or two dumbass penalties from him, But he does clear space for the other two when he’s on his game every three or four years.

Koivu has always been what he is now, a great two-way center whose team shouldn’t count on him to provide 1st line scoring. He also drives Toews nuts, and you can look for this matchup at The X aplenty. Toews only has seven goals against the Wild in his career, one of the lowest totals against an Western opponent he has and Koivu is mostly the reason for that. Toews has also only managed two goals and five points in the 11 playoff games the past two years against the Wild. So yes, at the UC, Q would be wise to keep Toews away from him.

Neiderreiter was one of the bigger antagonists in last year’s series, though only managed two points. He’s really starting to turn into the power forward that the Isles thought he would never become and the Wild hoped he would. He’s got a big shot as well, so he can’t be given too much space.

This would seem to be the x-factor for the Wild in this series. If they get going, the Hawks have real problems. If they don’t, then the Wild probably don’t have enough other firepower to keep up.

Vanek was the big free agent signing last summer as everyone knew he would be. And he’s been… well, Thomas Vanek. Sometimes he looks like an immovable boulder from in front of the net and scoring at will from there. Other times you’d never know he was playing. And once the playoffs hit, it tends to be the latter far more than the former. Vanek only had two assists against the Blues, and while not completely useless there were just far too many shifts where he wasn’t a presence. Maybe against a Hawks team that is not going to physically punish him the way the Blues do he’ll be more of a force, which would be an issue.

I never know what to make of Coyle. Every time I watch him I see what should be an unholy force of a player, but the numbers never match. He’s been bounced between wing and center his whole career but has mostly stuck at center this season. He’s got the size to give all the Hawks’ centers problems, and he’s talented with the puck. He’s a beast along the wall, which you would think would then see him coming off them with the puck and the chance to create.  But you just never see it that much. How much longer does the wait go on?

For me, Zucker is the biggest difference at forward between last year’s Wild and this one. He was hurt for last year’s series, and is the type of speedy winger on the bottom six that could simply shred Rozsival or Timonen. He’s likely the fastest skater on either team, and you’ll know him early. However, this line as well got absolutely beaten to a pulp in possession by the Blues, and there’s no reason to think that should get better against the Hawks. And if you give the Hawks a big advantage in possession, they’re much more likely to make you pay than St. Louis will.

Ah yes, well Fontaine and Brodziak were a major issue last year, but you won’t see their running buddy Erik Haula here, as he’s mostly been a healthy scratch. You could also see Jordan Schroeder or Sean Bergenheim rotate in here as well. Brodziak has been bothering the Hawks for at least five years, and we’ll come up with one or two annoying goals this series just because. Cooke can no longer keep up to be the complete asshat he made his name as, and I actually wouldn’t be shocked to see him scratched for most of the proceedings for a faster skater. Fontaine is pretty skillful to have on a 4th line, and whatever combo they roll out Mike Yeo is not going to be afraid to roll four lines as Laviolette couldn’t do with the Preds. Stern test indeed.