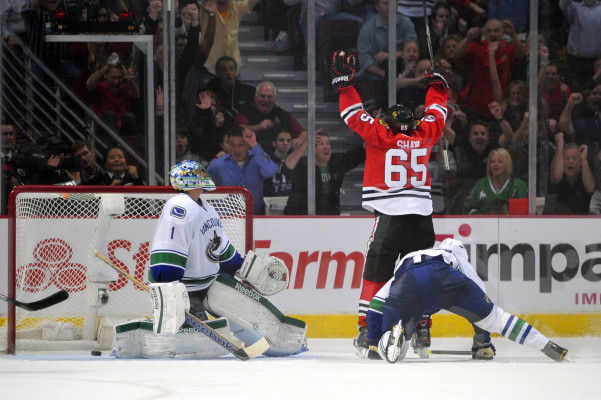 Before we start to focus on what the Hawks might start to do on Friday in free agency, there’s been something I’ve wanted to address since the trade of Andrew Shaw. This marks the second straight summer that the Hawks waved the white flag on bringing back a player they really wanted to before the free agency period opened. Last summer it was Brandon Saad. Now, one was obviously a much bigger impact but the similarities are there. Both were headed to only restricted free agency, both were desperate to stay (at least they say so) and both were wanted by the Hawks (or at least their coach). And yet it didn’t work.

And it seems the Hawks have no interest in playing hardball with anyone.

With Saad, they came out and said they feared an offer sheet from someone. Pittsburgh was the hot rumor. It could have been a few teams I suppose. I’m sure there was a similar fear with Shaw, though less so. But the thing is… offer sheets never happen.

There have been eight in 10 years. EIGHT. That’s not even one per summer. There hasn’t been one since Ryan O’Reilly’s out of the lockout in 2013. And that came in the middle of the season. It’s just not something GMs do, for fear that it will gum up future trade negotiations or whatever (and there’s probably a fear that other GMs wouldn’t deal with them, even if they had nothing to do with the offer sheet, in a show of solidarity which is so stupid my jaw just locked shut). It would seem you can leave your RFAs dangling out there for as long as it takes to get them to a number you can swallow. And some teams don’t even have the requisite picks to make offer sheets, further limiting the market.

But the Hawks didn’t make Saad wait. They didn’t make Shaw wait. The only player I can think of who was left out for a long time negotiation-wise was Kruger, and that was basically with his blessing while the Hawks sorted out their cap issues. Could they have taken the risk of letting Saad and Shaw hang out there for a bit and maybe brought their numbers down to where they could fit them in?

It kind of goes with the players they re-sign as well, doesn’t it? Toews and Kane were both given their two extensions pretty much as soon as it was an option. Same with Keith. The second of Daydream Nation’s was basically the Hawks handing them the two highest cap hits in the league on the first day they could. Is that the number the Hawks started with? They had a year to play with, and still could have gotten back to that number. Crawford was handed his deal five minutes after lifting the Cup in 2013, and though that one turned out to be market rate after a season, they again had a year to play with to see what they could do. They didn’t take it.

We know how the Hawks want to be viewed as an organization by other players and their own (even if it’s to their own detriment to others). It feels like the Hawks just don’t want to be viewed as aggressive or confrontational with any negotiation, and if they can’t make a deal they’re going to make a trade incredibly quick so that there’s no confusion. It’s one policy, not even sure it’s a bad one, but it has led to its share of problems.

-There sure seems to be a lot of smoke about 51 Phantom coming back, at least on a one-year deal. If you’ve been with us for any amount of time you know the affection we have for Brian Campbell, and bringing him back would also bring the unbridled joy of watching Beavis and Butthead in the booth have to walk back all the shit they’ve talked about him since he left.

The Hawks have about $6.3 mildo to play with, and they already have six d-men in the fold (though I see no reason yet why Svedberg has to be here at all). Even at 37 and wanting to come back to Chicago, you wouldn’t think Campbell’s agent or union is going to let him take much less than $3 million on a one-year deal. Anything else and Campbell’s basically a unicorn, because he can certainly get much more than that elsewhere (Dallas is sniffing around for sure).

That would still leave the Hawks with four to five forwards slots to fill, depending on what you feel about Dr. Rasmussen (and I’m guessing you feel nothing about him). There are some interesting fliers a team could take on the scrapheap, and we’ll take a look at them tomorrow.