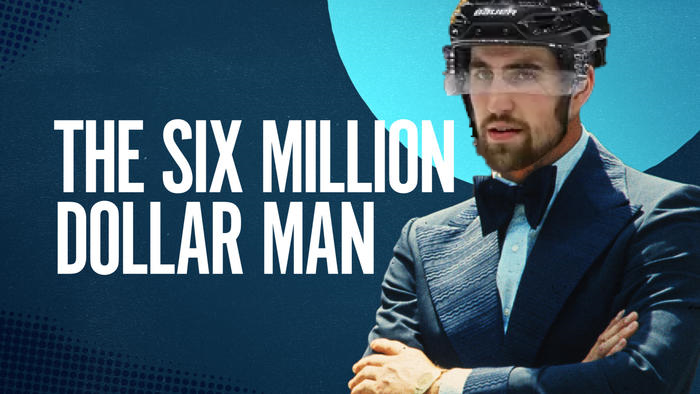 Sixty points. First-pairing minutes. A league-leading power play from middle December onward. A $1.2 million cap hit. These are some of the statistics that surround Erik Gustafsson. He’s the center of gravity that draws analytics nerds, construction-working meatballs, GMs, coaches, and agents alike to ask, “Just what the fuck are we looking at here?” Is Gus the future bedrock on the backend or is he a bum in a talented man’s clothes?

A Brief History: Erik Gustafsson led all Blackhawks D-men in goals, assists, and points, both at even strength and on the PP. Of Hawks D-men who played at least 41 games (so, minus Jokiharju and Koekkoek), he led in CF% and CF% Rel. Only five D-men in the NHL scored more points than Gustafsson last year. And of course, upon his insertion as the #1 PP unit’s quarterback on December 18, 2018, no team had a higher PP% than the Blackhawks.

No matter how you slice it, Erik Gustafsson was an offensive force last year. You don’t need a map to find that.

But his offensiveness extended to his defense—you know, the very title of his position—because he was a botched graveside burial in his own zone. This is where we need a couple maps to understand just how fucking awful Gus was on the defensive side of the puck. 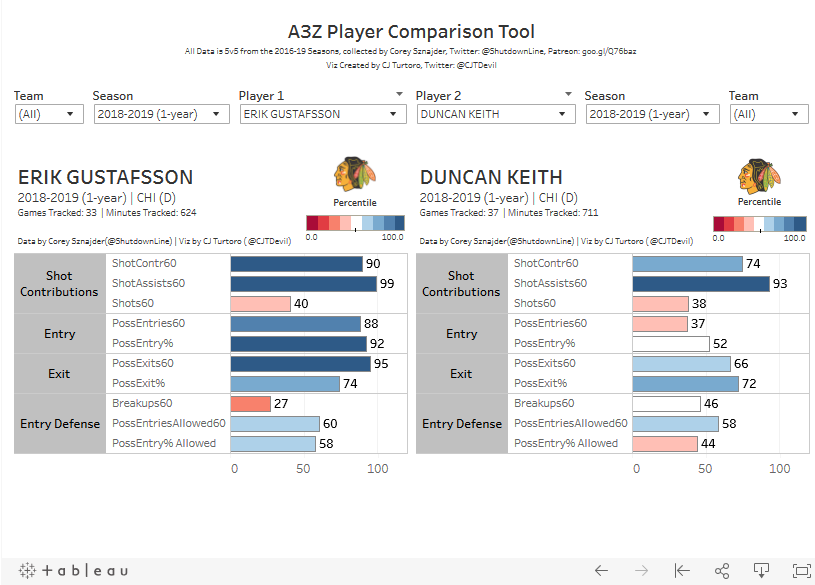 This tool is fairly forgiving to Gus. The offense and own-zone exit ability are on full display. Now, look at the ENTRY DEFENSE section.

The only thing objectively bad about it is his breakups per 60 minutes. What this means is that when opposing skaters go directly at Gus with the puck, more likely than not, he won’t break the entry up. On the plus side, Gus doesn’t allow too many opposing skaters to skate into the zone with possession (i.e., not dumping it in), in terms of both raw possession entries (PossEntriesAllowed60) and the percentage of entries with possession allowed (PossEntry% Allowed).

We can’t say the same about his partner, Duncan Keith. Last year, teams tended to attack Keith on the entry with better success. This means that generally, opponents got into the zone with possession on Keith’s side rather than Gus’s.

Why talk about Keith though? Does that mean that Gus is better on defense than we give him credit for? Are we deflecting by using Keith as a comp? Do you think I’d be doing all this if that were the case, dear reader? 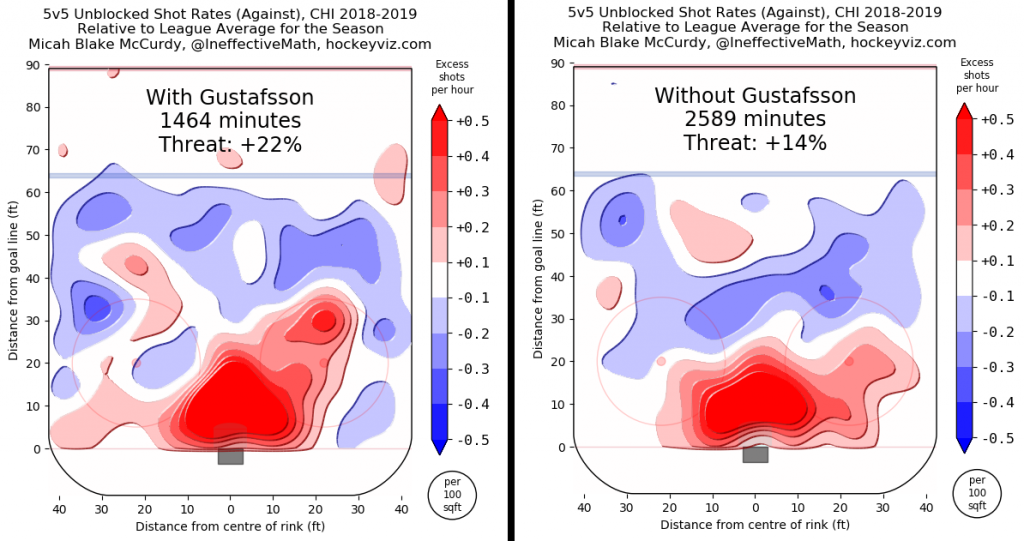 So, we’ve established that Keith is more of a hole in terms of possession entries than Gus. It’s what happens after Gus gets stuck in his own zone that’s the menace.

Both are really red, because the Blackhawks defense—and I cannot and will not ever stress this enough—is more embarrassing than having your first period in white pants. But it somehow got worse with Gus on the ice.

With Gus on defense, you’re looking at a higher concentration of high-danger shots AND more shots from the top of the circle on the side Gus plays on. Recall too that the only D-man on the ice for more high-danger goals than Gus last year was his partner, Duncan Keith. And though Keith’s heatmaps were bad, they weren’t this bad. (You can guess whose were worst on the team overall.)

In short, last year saw opponents enter the zone on Keith’s side and do a ton of damage on Gus’s side. This is their top pairing. Very good, very conducive to winning.

This is what we’ve been saying about Gus for a while. The offense and creativity are all there, but he’s stagnant ditch water in his own zone. The question is, which side of the coin has more weight?

It Was the Best of Times: Gustafsson pairs with Connor Murphy and continues his incredible offensive output. He vastly outpaces his xGF% just like last year, and the PP ranks in the top five based on Gustafsson’s vision and creativity at the point—both of which are direct results of playing with Patrick Kane more than everyone, just like last year. Murphy cancels out Gustafsson’s complete lack of ability in his own zone, and Gus’s offense far outweighs his poor defense. He scores 55 points. Essentially, the Hawks get Brent Burns lite.

It Was the BLURST of Times: Gus doesn’t spend most of his time with Patrick Kane, and he regresses to the mean. Opponents wait just a second longer to catch Gus on some of his ill-advised own-zone dangles and exploit his John Wayne tendencies. He and Keith continue to get buried in their own zone. The power play flattens out, but this time, it isn’t a result of Patrick Kane running on fumes.

Prediction: Gustafsson is an offensive powerhouse. He continues to outperform his xGF% and doesn’t see an offensive regression. The same power play unit that came to life after Gus became THE GUY continues to run roughshod, finishing in the top 10 on the year. (There’s a concern that it won’t produce, based on how the PP finished last year. I think that’s a valid concern, but I also think that it was more a result of Kane running on fumes than anything.)

There’s one huge caveat to this: Patrick Kane must stay healthy. Kane has the same sort of gap between GF% and xGF% throughout his career that we saw from Gus last year. And Gus’s performance correlates with whether he’s playing with Kane.

You can see similar performance tracks when Gus plays with Toews, DeBrincat, and Strome in similar situations, but they aren’t quite as extreme. All this is to say that Gus doesn’t carry it by himself. When he plays with top-tier talent, he looks like a top-tier player. When he doesn’t, he doesn’t. What’s that worth to you?

So, what the fuck are we looking at with Gus? An outstanding complementary player. A good, creative play maker. Good enough to score 60 points with the right teammates, but not good enough to create by himself. Reliant on a generational talent. A farce in his own zone. Probably most valuable as a trade piece.

In other words, we’re looking at the Blackhawks’s next 6 x $6 million man.