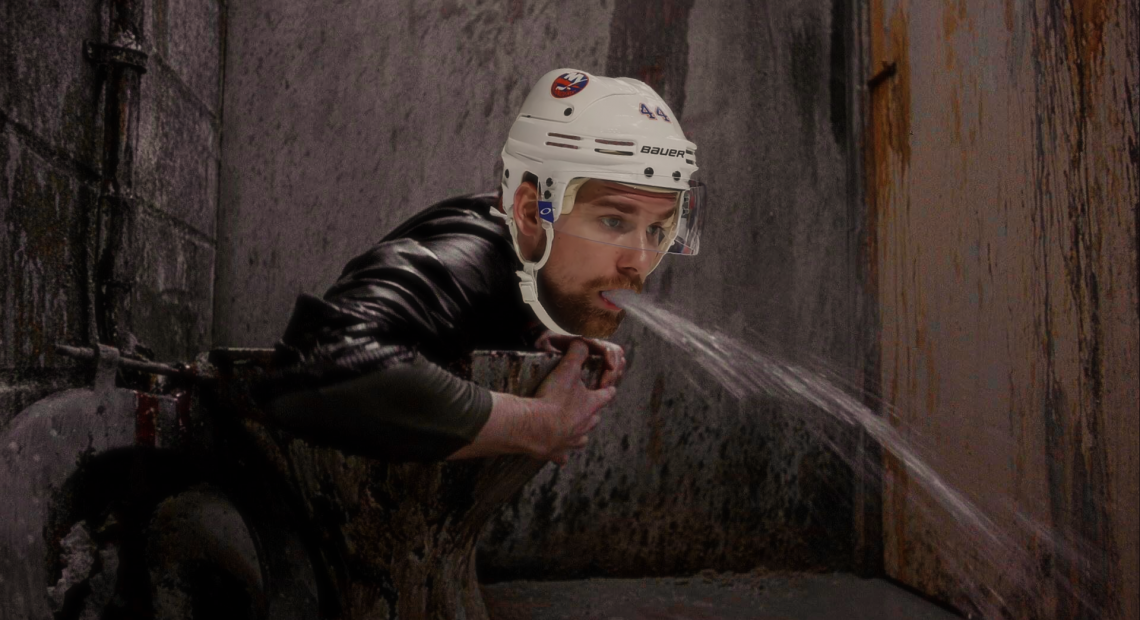 After last year’s personal affront of a blue line made it easier than ever to forget that just three years ago the Blackhawks were having a parade, Stan Bowman knew he had to answer for his backend farce. The answer he came up with was Calvin de Haan, a defensive defenseman who will probably miss the first month or two while rehabbing a major shoulder surgery. But the Hawks got him for a song, and when he’s healthy he’s effective, so there’s something to look forward to.

A Brief History: The most important thing to remember about Calvin de Haan is that he’s very unlikely to start the season on the ice. He had off-season surgery on his right shoulder in May and had a 4–6-month recovery timetable. It’s looking more likely that he’ll fall closer to the end of that recovery projection, meaning that he probably won’t be back until November. On top of that, de Haan has had surgery on his left shoulder a few times in the past. But Bowman got de Haan for Anton Forsberg and Gustav Forsling. So, de Haan could miss the entire 2019–20 season and the Hawks still likely win the trade.

History of shoulder problems aside, de Haan had a pretty good year last year for a defensive defenseman. His possession numbers were excellent in Carolina, even when you account for how much time he spent in the offensive zone. That 47.06 goals-for percentage (GF%) doesn’t inspire confidence on its face, but it could be a function of the fact that Carolina is more of a possession juggernaut than a pure offensive power. Expect that to rise if the Hawks’s offense is still clicking, and there’s no reason to think it won’t.

In addition to his strong possession numbers, de Haan played second-pairing minutes for the eighth-ranked Hurricanes PK. He played about 147 minutes on the PK last year and was on the ice for 20 goals, which is generally fine. It’s definitely better than what Keith (166 minutes, 31 GA) and Seabrook (166 minutes, 29 GA) did last year.

In short, de Haan is a stay-at-home defenseman who, when healthy, can make the Hawks blue line a bit stouter than it was last year. He also played over 300 minutes with TvR last year, a primer for what playing with the Hawks will be like.

It Was the Best of Times: de Haan comes back in early November and pairs with a waiting Adam Boqvist. That’s the role de Haan typically played in Carolina, where he spent most of his time paired with Justin Faulk, another offensively minded, defensively stunted defenseman. Given his stay-at-home tendencies and Boqvist’s NHL-ready offense, these two seem destined to come together at some point. Might as well be as soon as possible.

On the PK, de Haan and Murphy take over the first-pairing duties, sparing us the horror of watching that Keith–Seabrook snuff film, at least until the second unit comes out.

It Was the BLURST of Times: de Haan comes back to pair with Erik Gustafsson on the top pairing, because this is the reality the Brain Trust wants. Gustafsson gets exposed as little more than a third-pairing bum slayer, and de Haan floats between covering for Gus, Seabrook, and Maatta, sometimes all in the same game. Then, de Haan ends up on a PK unit BEHIND Keith–Seabrook.

Alternatively, de Haan’s shoulders are in worse shape than anticipated, and he misses most of the 19–20 season. Any “The Hawks have an outside shot at the playoffs” talk turns to ash in our mouths as we watch Keith and Seabrook get mutilated all year again.

Prediction: de Haan is the consummate babysitter and as close as the Hawks will ever again get to having Hjalmarsson on the team. The problem is that the Hawks have three D-men who need to be babysat for each babysitter they have. Murphy and de Haan can’t cover for all of Keith, Gus, Seabrook, Dahlstrom, Maatta, and Boqvist (if he makes it here) at the same time.

So, we’ll see de Haan pair with Murphy on the third pair, because fuck you. They’ll serve as a shutdown pairing, and things will be generally fine when they’re on the ice. But that’ll expose the Keith–Gus and Maatta–Seabrook pairings as the bloated, slow, irresponsible messes that they are, and the Hawks will once again rely on the goaltending to constantly pull their asses out of the sling and the offense to outscore their defensive problems. Colliton will do the right thing and put de Haan on the first PK unit, but it will be with Keith, who couldn’t be bothered to give a shit last year.

On his own, de Haan is a good shutdown D-man at a good price (three more years at $4.55 million per). And he’ll be perfect for when Boqvist makes the jump. But de Haan isn’t a savior. He’s a nice second-pairing D-man on a team that needs a top-pairing guy and has nothing close to one. The problems on the blue line this year are bigger than he can solve alone.

So yeah, he technically makes the blue line “log jam” better, sort of like a plumber who empties a toilet with his bare hands, throws the remains in a garbage can, and doesn’t have the equipment to actually fix the clog.

“Keep on going and fuck everything. Pile misery upon misery, heap it up on a spoon, and dissolve it with a drop of bile.”

Adam Boqvist (oh please fucking god let it be so)